Climate change has been presented as a positive boost for grape growing in the UK, but a new report warns that patterns of extreme weather still pose a threat to the viability of wine production. 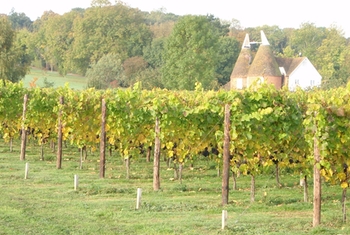 A boom in English wine production has seen the vineyard area grow by 148% in the past decade. However a new study reveals that year-to-year climate variability and hazardous weather at key points in the growing season leave the industry highly sensitive to the elements.

Researchers from the University of East Anglia (UEA) examined the UK’s main grape-growing regions and looked at the relationships between temperature, rainfall, extreme weather events and yield. They also surveyed wine producers for their views on the role of climate change in the success of English wine.

The level of June rainfall was shown to be the most powerful weather indicator in explaining year-to-year yield variability in the UK.

The UK has been warming faster than the global average since 1960 and eight of the warmest years in the last century have occurred since 2002.

Lead researcher in the study, Alistair Nesbitt, from UEA’s School of Environmental Sciences, said: “Producers recognised the contribution of climate change to the sector’s recent growth, but also expressed concerns about threats posed by changing conditions.”

The study found that while average temperatures over the growing season have been above a key minimum threshold for ‘cool-climate’ viticulture for two decades, wine yields vary considerably.

Temperatures over this period were roughly similar to those in Champagne during the 1960s, 70s and 80s. However by comparison, UK wine yields are very low. In Champagne, yields can be more than 10,000 litres per hectare, but in the UK, it is around 2,100 on average.

The rise of sparkling wine production has also seen substantial growth in varieties such as Chardonnay and Pinot Noir. However, the study shows that these are more susceptible to UK climate variability.

The spring months of April and May have become warmer over the last 25 years. This, says the report, “is a significant time when buds burst and initial shoot growth takes place. Warmer temperatures at this time indicate an earlier start and lengthening of the season.”

However, when warmer temperatures occur in April, they confirm there is potential for increased vulnerability if a May air frost follows.

Summer risks also play a siginificant role, with the report stating: “In June, wet weather, particularly when combined with cool and overcast conditions, can really impact the flowering process, delaying it and reducing the number of berries and young grapes forming on the vines. We saw a correlation between high June rainfall and poor yield across the whole period we studied.”

The research is published in the Australian Journal of Grape and Wine Research.