On this day in 1478, George duke of Clarence was drowned, so legend has it, in a butt of Malmsey wine for plotting treason against his brother, Edward IV. 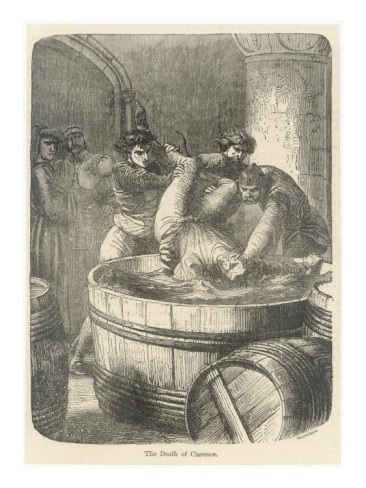 A member of the Yorkist faction in the Wars of the Roses, George was the younger brother of Edward IV and elder brother of the future Richard III.

Initially a staunch supporter of his brother Edward, thanks to his marriage to one of the Earl of Warwick’s daughters, he was gradually drawn into “the Kingmakers’” machinations and turned against Edward in 1470.

Initially he seems to have believed Warwick would make him king in his brother’s place but when it became clear this would not be the case he deserted back to Edward at the end of 1470 and was restored to royal favour in 1471 after the decisive battles of Barnet and Tewkesbury secured the throne for Edward.

In the years that followed George, who had always been overly fond of the bottle, descended further into paranoid alcoholism, a condition not helped by the death of his wife, Isabel, during childbirth in 1476.

One of George’s retainers, the Oxford astronomer Dr John Stacey, was arrested in 1477 and admitted, under torture, that he and two others had “imagined and compassed” the death of the king by ‘black arts’.

Stacey and one his alleged accomplices were executed at Tyburn for treason. Foolishly, George appointed a former Lancastrian, Dr John Goddard, to proclaim the mens’ innocence in Parliament. By defending convicted traitors – no matter how dubious their supposed guilt – George could now be accused of treason himself.

Furious, and no doubt mindful of his brother’s previous betrayal, Edward duly summoned George to Windsor and had him confined to the Tower of London.

Edward himself passed sentence on his brother, finding him guilty of “unnatural, loathly treasons” – made all the more serious because George, as a sibling, more than most owed him “loyalty and love”.

The sentence was carried out on 18 February and legend has it George asked to be drowned in a butt of Malmsey wine – which was his particular favourite. It should be noted that despite its associations with Madeira now, the ‘Malmsey’ of the time would most likely have come from Greece but was often made with Malvasia still.