The best pubs in Britain, as judged by the Campaign for Real Ale (Camra), have been released to mark the launch of The Good Beer Guide 2016, which published on Thursday. 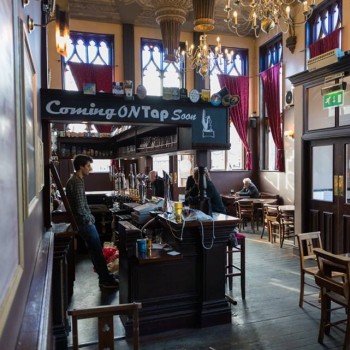 Pubs are judged on their atmosphere, decor, welcome, service, value for money, customer mix, and the quality of beer being served.

“Being named in the Top 16 in Britain is something these pubs should be hugely proud of and is testament to how hard each of the pubs work to get this far, winning their local and now regional pub award. The next step for all of these pubs is to be judged against each other in the National Pub of the Year competition, which will see one of the 16 crowned as the best pub in the whole country.”

The National Pub of the Year for 2015, chosen from the following finalists, will be announced in February 2016.

Click through to see the 16 best pubs in Britain, with descriptions provided by Camra… 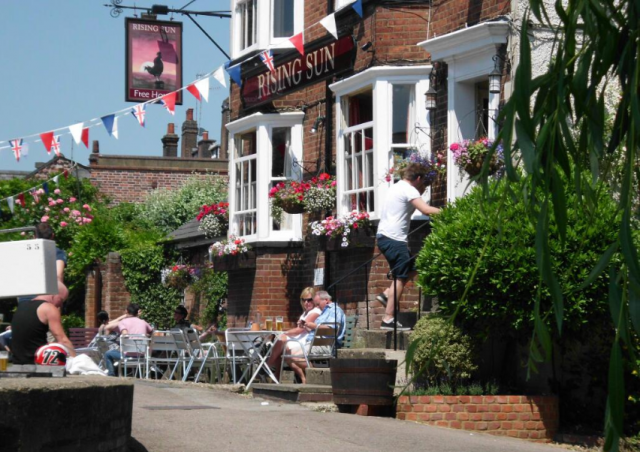 The four changing guest beers and fifteen real ciders / perries are accompanied by bottled French ciders, snuff, cigars, and unusual spirits and liqueurs. Three inside areas, canal-side seating and a sunken patio make this a pub for any time of the year. Look out for the many events that take place throughout the year including beer festivals, quizzes, and cheese club. Food is restricted to their renowned ploughman’s. It operates a Camra discount scheme. 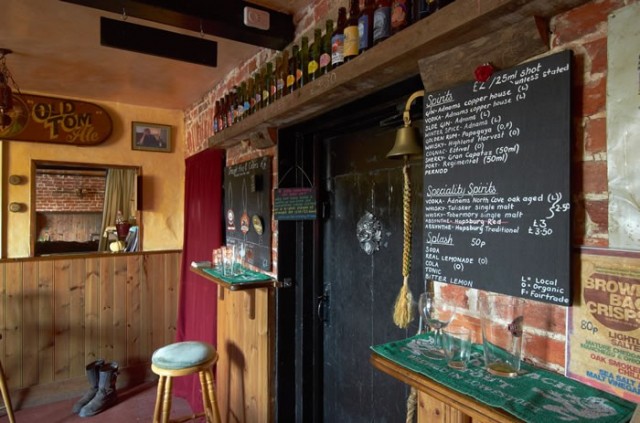 This pub only re-opened in Dec 2011 after being closed for eight years. The current owners have focused on green issues – renewable energy, recycling, local suppliers, sustainable living and appreciating the environment. Their adjacent campsite business is open from May to October and is now called Alde Garden (see www.aldegarden.co.uk) and offers a variety of camping options. The pub is a very cosy; a traditional two-room pub, it is warmed by a wood-burner and wood-fired range. Gravity dispensed beers from local brewers are served through a taproom door, a range of Fairtrade, organic and local Adnams spirits is also available, and bar snacks are served. Some excellent non-alcoholic cocktails are also available. Live music plays monthly, there is a piano and various pub games are offered including bar billiards, darts, crib and board games. Horse & trap rides available in summer. 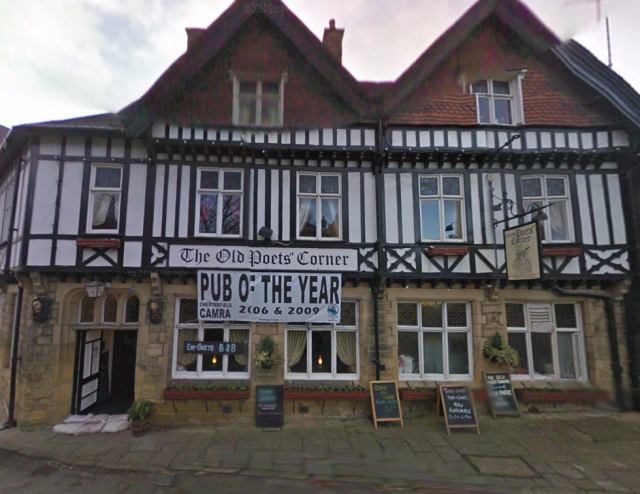 The home of Ashover brewery, this mock-Tudor building has a warm, welcoming atmosphere, with open fires, candle-lit tables and hop-strewn beams. Choose from 10 handpumps, including regular Ashover beers, along with a range of guest ales, traditional ciders, draught and bottled Belgian beers and country wines. Winner of CAMRA national Cider Pub of the Year 2006.

(Greater London) One Inn the Wood 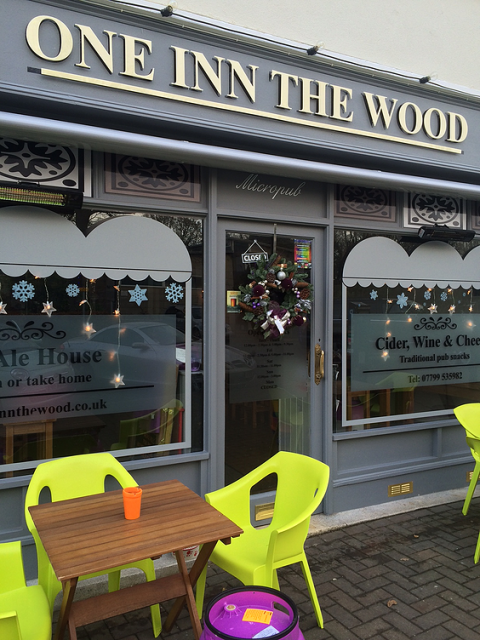 This micropub – the first in the borough of Bromley – was formerly a wine bar. It opened in May 2014 as a welcome addition to the Petts Wood area. As you enter the wall on the left hand side is dominated by a woodland scene. The floor is a square wooden boarded area with high wooden tables around the walls, benches and stools to sit on. A wide wooden bar counter with beers and ciders served from a temperature-controlled cellar room behind. You can watch your drink being poured through the window. The pub serves only Kent beer and these change all the time. Kent cider, wines and fruit juices are also available. The food is again Kent themed with a selection of cheeses, sausage rolls, crisps and pork pies from the county. There is a charity fine box for mobile phone use inside the pub. The real ale menu is listed on a blackboard behind the bar. Jugs are in use for larger orders. Carry outs are available too. 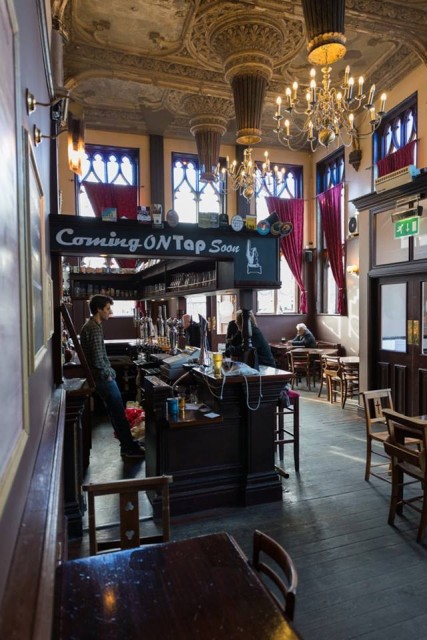 This Grade II listed free house reopened in 2005 after 16 years in co-operation with English Heritage with particular attention to the fine and unusual ceiling. The central bar serves up to nine ever-changing real ales with an emphasis on local independent brewers. There is a large drinking area in front of the bar along with a small vault and a snug at the rear. The pub itself dates from around 1800 and was quite prosperous due to its junction location and proximity to the nearby Smithfield Markets. There is no hot food but locally produced pork pies are available.

(Kent) The Yard of Ale 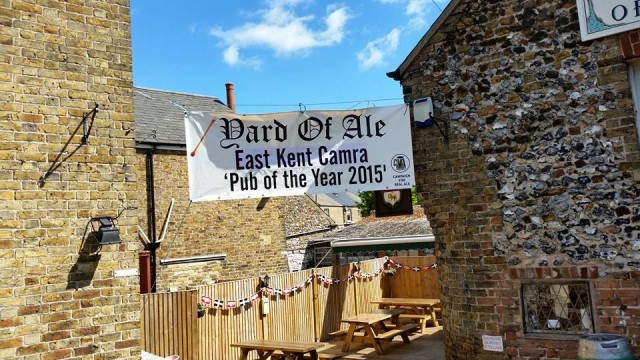 Alehouse/Micropub in a 19th Century stable in the village of St Peter’s. Serves cask ales, real ciders and locally produced wines along with tea & coffee, handmade pork pies and Kent crisps and cheese. The bar floor is made of original cobbles and is often strewn with hay for that stable effect. Outside there is a wooden decked patio drinking area.

Recently bought by the current owners, the Cricketers has established itself as an excellent cask ale pub. Now with 11 handpumps on the bar the beers come from local microbreweries. This is a very friendly local community pub on the edge of the town centre which hosts darts and pool teams. Entertainment is offered on the weekend. 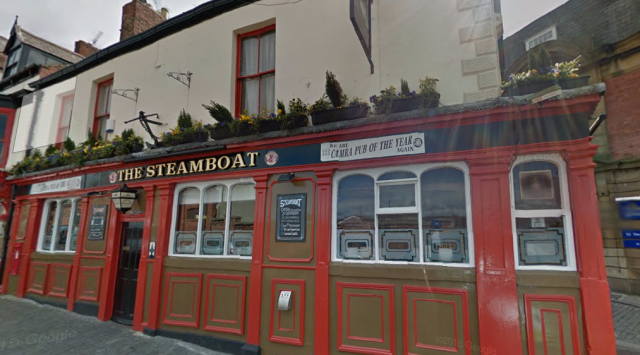 Offering an impressive range of beers from independent and microbrewers on eight handpumps plus a real cider, the Steamboat is a regular local Camra Pub of the Year winner. A pub full of character and atmosphere, run by friendly staff, it has a large bar with a raised seating area and a small lounge. The South Shields ferry and Custom House theatre are nearby. Beer festivals, cheese and ale and Meet the Brewer nights are arranged on a regular basis. 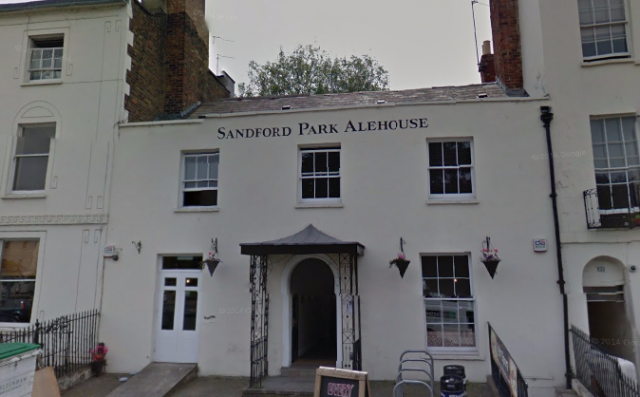 Opened in April 2013, this smart new Alehouse at the far eastern end of High Street, backing on to Sandford Park. The u-shaped main bar area wraps around a new timber staircase with a billiards table at far end, small front snug room and large south-facing beer garden. Up to seven guest ales (with Oakham Ales a feature) are available along with a good selection of ciders and foreign beers. 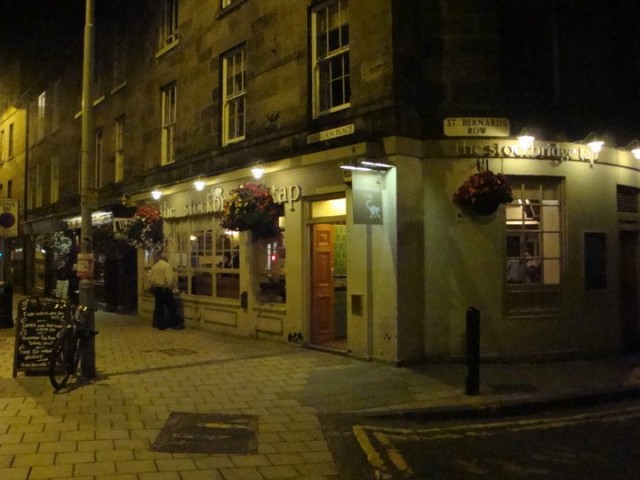 Very much a specialist real alehouse, offering unusual and interesting beers from all over the UK and holding occasional beer festivals. The L-shaped room, with bright bar area, boasts mirrors from lost breweries including Murray’s and Campbell’s. There is plenty of seating and also ample space for vertical drinking. The pub food menu is not available on Monday or evenings from Friday to Sunday. 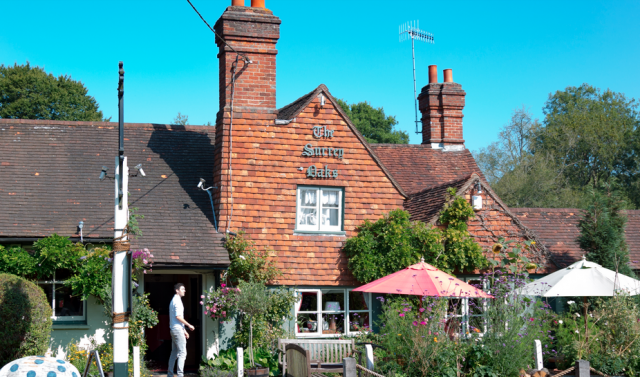 The Soaks is a great supporter of micro-breweries from both near and far. Three guest beers are available and these are constantly changing. On average a new beer comes on sale every day with hoppy ales always popular. A dark beer is always available plus around four ciders and a perry are sold direct from the cellar. The building itself dates in part from the 16th century, but only became a pub in 1850 having previously been a wheelwright’s cottage. Internally there are a number of distinct drinking areas. The main drinking area is a low-beamed flagstone bar which has a large inglenook fireplace complete with wood burning stove, and low beams covered in pumpclips. There is also a piano in this bar which is in tune and may get played during the acoustic music night on Tuesday. Another room is to be found near the car park entrance and this contains a genuine 1958 wall-mounted Rockola jukebox, still playing original 7′ vinyl records. This room can be curtained off for meetings. This bar leads to the Georgian restaurant where excellent food is served. A variety of food is served from an open kitchen. A choice of two roasts are available on Sundays. There is also a children’s play area and a covered patio. 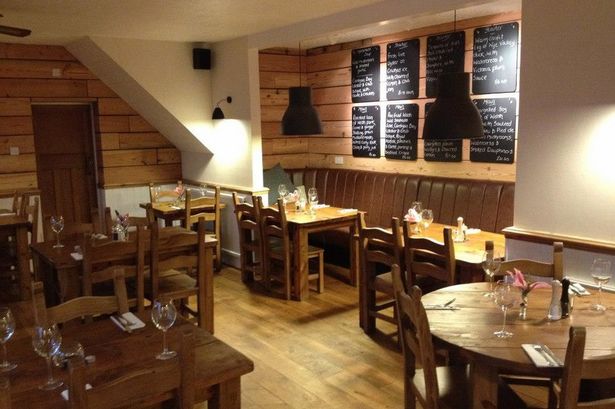 A short walk from the town centre, this award-winning pub is a must for quality food and drink. Up to eight ales, featuring beers from the family’s Otley Brewery plus a wide range of eclectic and innovative guests. An impressive range of international beers are also available plus real cider and perry and some unusual soft drinks. The restaurant offers locally sourced foods and friendly service. Homemade breads, snacks, chutneys and sauces are often available for purchase in the bar. Numerous beer events held throughout the year including beer and food pairing, meet the brewer nights and themed beer festivals. 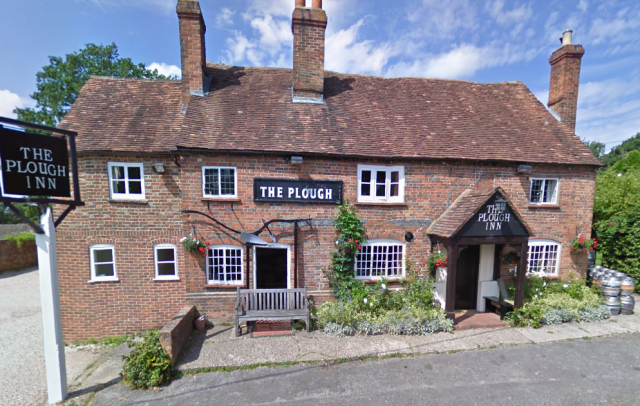 An unpretentious and cosy traditional village local that can rightly be called a “gem”. Enjoy the beer gravity-fed from casks behind the bar; join in the conversations, sit in front of a log fire, or relax in the peaceful garden. Very popular with locals and also visitors to Pamper Forest and the nearby Roman remains in Silchester. Simple food is order of the day with good range of baguettes available.

(West Midlands) Hail to the Ale 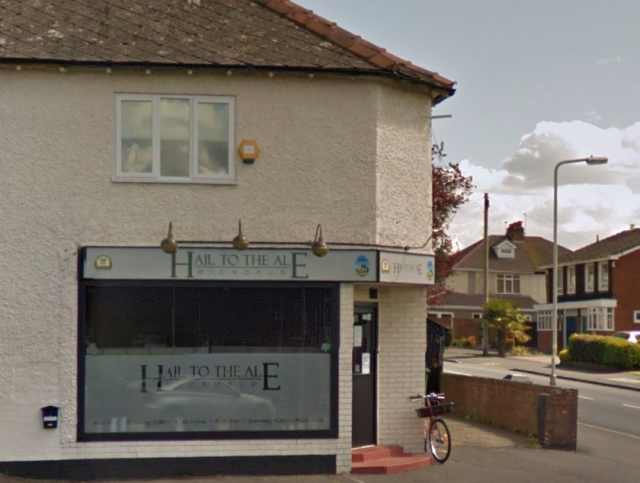 A traditional country pub close to the popular Hadrian’s Wall path. Although opened up, the interior still has the feel of three distinct rooms. There’s a games room at the back with a pool table, the bar room is cosy and welcoming with a roaring fire in winter and there is a separate dining room. Some interesting historical State Management Scheme documents adorn the walls. The Drovers is very much a pub at the heart of its community. It also has a well-deserved reputation for excellent food and as an oasis for lots of different and sometimes obscure (for the area) real ales. 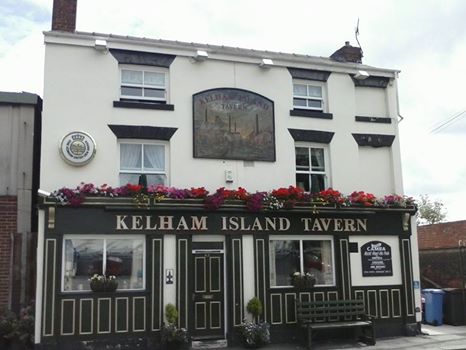 National Pub of the Year 2008 and 2009 are only two of the awards won by this pub. A two-roomed freehouse with impressive garden showcasing rare and local microbrewery beers, a stout and porter are always available.