While Michelin-starred Mayfair newcomer Gymkhana may continue to steal headlines and win hearts with its modern take on Indian cuisine, its neighbour, Tamarind, put Indian fine dining on the map and was the first Indian restaurant in the world to be awarded a Michelin star. 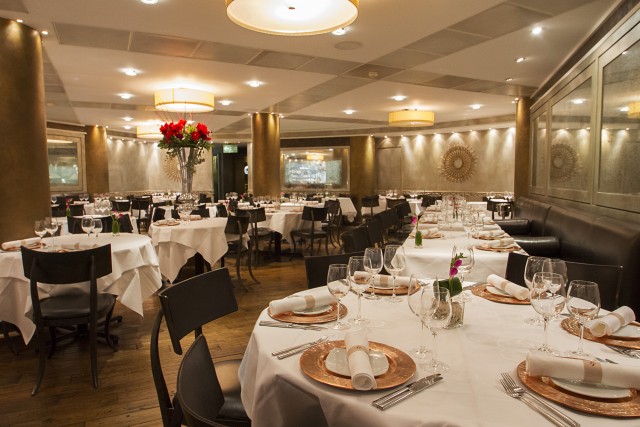 Now 20 years old, Tamarind is still going strong despite increasing competition from the likes of Trishna and Gymkhana for the Indian fine dining crown in the capital. Located in a basement on Queen Street, the restaurant, overseen by executive chef Peter Joseph, specialises in Moghul cuisine from northwest India, meaning meat, fish and game are given signature smokiness from being flung in a tandoor oven. Flavours are punchy and memorable without being overpowering.

On arrival, I’m ushered down a spiral staircase into a cosy space paved with gold, with everything from the columns to the etched glass given the Midas touch. Middle Eastern filigree panels abound, creating an ambiance of luxurious exoticism. Bringing a chef for company, our feast begins with a chilled glass of Champagne to whet the appetite, and a generous helping of paper-thin poppadoms served with a myriad of dips.

My visit coincided with the launch of Tamarind’s first tasting menu – a six-course affair with wine pairings designed to harmonise with the flavours in each dish.

Priced at £75 for the food alone and £125 with the wine pairings, first out of the blocks was a playful spinach fritter lollipop, which disappeared in one bite, proving Joseph isn’t averse to having a little fun in the kitchen.

Next came a fine dining take on a popular street food dish: channa chaat, made with spicy chickpeas and wheat crisps drizzled with sweetened yoghurt and tamarind sauce.

Bright and lively with a lick of heat, the fruity, creamy interior was given welcome crunch by the wheat chips, while the accompanying Trimbach Cuvée Frederic Emile 2007 Riesling cut through the rich dish with its mouth-puckering notes of lemon, lime and orange blossom alongside an alluring whiff of kerosene.

Proving their mettle in dealing with delicate flavours, the next dish, a solitary scallop served in its shell with smoked peppers and tomato chutney, was a delight and over all too quickly, the texture of the iridescent flesh silky and cooked to perfection, while the peppers offered a subtle suggestion of heat.

Our French sommelier came up trumps again, pairing the tasty morsel with Dom Bernard Defaix Chablis Premier Cru Les Lys 2013, which delivered the complexity one hopes for in a premier cru, with flavours running the gamut from wet pebbles to tropical fruits like pineapple and passion fruit.

But while the scallop was a thing of beauty, the tandoor flavours came into their own in the next dish. Without meaning to overdo the superlatives, the tandoor grilled baby chicken breast was the best piece of chicken I’ve ever eaten. Before I’d even had a bite, the inviting smoky aromas had won me over.

Bathing in a rich, buttery tomato bath offering a pleasing punch of heat, the chicken was impossibly tender and feather-light. Bearing the scars of the tandoor, the flesh was juicy and moist, with a succulent, smoky finish.

After so much excitement our palates needed cleansing with an invigorating tamarind and date sorbet, which we devoured before moving on to the meat of the matter: lamb chops with papaya, fennel and star anise served with spiced spinach, dal makhni and pulao rice.

Glistening with promise, the earthy lamb was lifted by the fennel and star anise, the ensemble exemplifying the judiciously judged spice and appealing aromatics that are the hallmarks of Tamarind’s cuisine.

And while the wine match was probably the least successful of the night due to a clash of heat and tannins, the Grenache dominant Dom Chante Cigale Châteauneuf-du-Pape 2011 was bright and charming.

Ending the evening sweetly, we indulged in carrot fudge with pistachio kulfi. Creamy, grainy and simultaneously savoury and sweet, the warm fudge made for a decadent finale.

While the experience is by no means cheap, like all of the best tasting menus, the new menu at Tamarind takes you on a journey via a kaleidoscope of flavours that showcase signature dishes like the irresistible tandoor chicken.

Tamarind’s exemplary Indian cuisine is as close as you’ll get in London to the real thing. Ingredients are expertly used, spices subtle and flavours aromatic and refined rather than knockout hot. If you’ve yet to go and are seeking the edited highlights, then order the tasting menu, sit back and enjoy the ride.