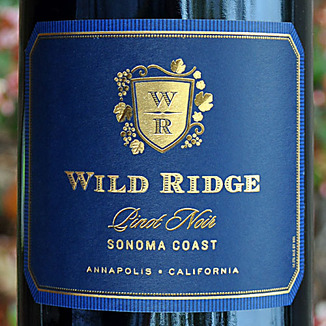 “Sonoma Coast” is a joke of an appellation among wine lovers, according to Dave McIntyre writing in the Washington Post this week. Instead, he says, discerning drinkers should look for wines produced on its western side.

Of the Sonoma Coast tag he said: “It covers too much of the county to be meaningful in terms of the climate or terroir and style of its wines. True Pinot fiends know to look for wines from the “west Sonoma Coast,” directly bordering the Pacific Ocean, where the terrain is often rugged and the sea keeps the air cool and foggy, as though it were weighting the vines to enforce restraint in the wines.

“The clue on the label with Wild Ridge is the word “Annapolis” — not the capital of Maryland but a small town in far northwest Sonoma County, far from the tasting room crowds. The wines from this area unfortunately are expensive, but they are worth seeking out.”

He said: “This is 100% Merlot, grown biodynamically. It offers bright fruit flavors with near perfect pitch; think of a clear musical tone sounded by a tuning fork rather than a complex chord. The acidity balancing the fruit makes it a food-friendly wine.”

The wines of Tablas Creek were given a showing by Sandra Silfven, writing in Detroit News, whose 120-acre vineyard lies 12 miles inland from the Pacific, is organically farmed with all of its vines imported from Château de Beaucastel in France, undergoing a three-year quarantine before being planted.

She said: “This is the flagship white for Tablas Creek, the Reserve level white – a blend of Roussanne, Grenache Blanc and Picpoul Blanc all raised on the home vineyard. The Roussanne provides the sturdy, minerally bedrock for this wine, the Grenache adds green apple and anise, and a lush mouthfeel, and the Picpoul adds minerality and tropical notes. It’s a treat to experience how the Grenache Blanc and Picpoul add to the character of the Roussanne. Portions of the blend were fermented in small oak barrels and one large foudre, the rest in stainless steel. All went through malolactic fermentation. The winery expects this wine to age for 15 years or more.”

Tablas Creek’s “Côtes” wines – a range made to be “fruity and appealing, and approachable” – includes this red blend based on Grenache.

She said: “This dry red blend is 60% Grenache and 25% Syrah, fleshed out with Counoise and Mourvèdre. It has good acidity and those trademark Grenache chalky tannins to frame lush flavors of spice, plum, cherry and licorice. The juice was fermented off natural yeasts in stainless steel and upright wooden fermenters and then racked and blended, and aged in Tablas Creek’s huge wood foudres. This baby is one of the winery’s signature reds.”

This “elegant” Pinot Noir from New Zealand’s Otago Valley was recommended by Irene Virbila writing in the LA Times.

She said: “New Zealand Pinot Noir just keeps getting better and better compared with even a few years ago. This example from the Central Otago estate Mohua is delicate and light on its feet, a bargain at less than $20. Its exuberant berry flavors tempered with herbal notes make for delicious drinking.

“It’s a great bottle to have on hand for a dinner invitation or an impromptu supper at home — a couple of lamb chops on the grill, a cheese and spinach pie, vegetable casserole or a rotisserie chicken.”

Tarima Monastrell, writing for Dallas News, recommended this Spanish red made from the Monastrell grape, also known as Mouvédre, which she described as a “taste sensation.”
She said: “Tarima is the essence of Monastrell, with its brooding, purple-black color and savory, earthy, blackberry fruit with floral highlights and ripe tannins. The dense character of the wine is lightened with traces of citrus peel and pomegranate. It will be a delightful companion with brisket.

“The Alicante wine region is located just west of two other Monastrell strongholds: Yecla and Jumilla. The climate in these regions appears to suit Monastrell (also known as Mourvédre), providing the long growing season it needs to fully ripen. Here, gnarled grapevines squat close to the rocky soil to reflect the sun’s heat, providing further ripening encouragement to help create flavorful wines like this one.”

This “disctintive” blend of two Portuguese white wine grape varieties is a “window into the style of an often overlooked wine-producing country”, according to Michael Dresser, writing in The Baltimore Sun.

He said: “It’s quite dry and herbal, with a deep color not usually found in a young wine. But on the palate it’s very fresh, with flavors of pears and tropical fruit. Its intensity and grip make it a standout in this price range. (Note: Quinta is abbreviated Qta. on the label.)”

Dennis Sodomka, writing in the Augusta Chronicle, recommended this “Super Tuscan” blend made by Alessandro Bocci, “one of Maremma’s most talented winemakers”.

He said: “Tortarossa means red cake, and this wine is as pleasing as any red velvet cake I’ve ever had. It is a beautiful, deep red in the glass, with dark fruit aromas. The flavors are rich and deep, with black raspberry and red currant predominant. It is fruit-forward without being overripe. It finishes with a nice balance of acid, making it a great food wine.”

Peg Melnik of The Press Democrat chose Kendall-Jackson’s Vintner’s Reserve Zinfandel as her top pick of the week because its “price point makes it a steal for the quality, and it’s also in great supply.”

She said: “Over the past 10 years. a popular style has been the powerhouse Zin, pushing alcohol levels in the 16-plus percent range. But Kendall-Jackson’s Zinfandel is modest at 14.5%. The winemakers said they’ve moved away from the over-oaked, over-extracted Zinfandel to create a balanced Zin; they’re striving to create one with elegance and power.”

She added: “A tasty Zin that’s a steal for the quality. Aromas and flavors of raspberry, blackberry and toast. An intriguing hint of cedar in the mix. Impressive.”

Finally this “well-balanced, well-priced” Chardonnay was recommended by Colette Bancroft in the Tampa Bay Times.

She said: “This Chardonnay is sourced from Meiomi’s vineyards in three locations along the California coast: Santa Barbara, Sonoma and Monterey. The result, available at about $20 at wine-savvy markets, is lively, smooth and subtly complex.

“On the nose, crisp golden apple, a touch of mineral and a whiff of honeysuckle combine. That apple is first on the tongue as well, followed by rich pineapple and sweet spices with an understated line of oak. Creamy and lush in the mouth, this wine still finishes clean and crisp. Meiomi Chardonnay will pair with a wide range of foods, from a plate of spicy shrimp and grits to pork chops baked with apples or a bowl of vegetable green curry.”