System gives draught without the graft

A newly developed home draught system is looking to turn kitchen counters into personal bars, allowing customers to collect their favourite brews and put them all under one tap. 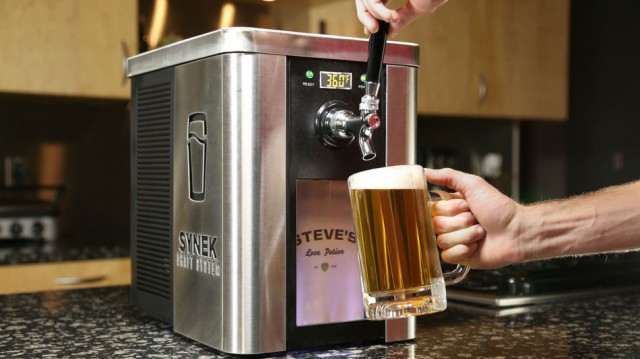 The brainchild of beer fan Steve Young – who was tired of filling up containers of his favourite craft pours only for them to lose their freshness after a few days – the SYNEK system uses refillable vacuum-sealed cartridges.

These interchangeable cartridges – which slot into the toaster-sized tap machine – are said to keep beer as fresh as first-poured for up to a month.

The bags can be filled with any beer from any tap in any bar, be it a customer’s first home brew, favourite craft beer or global lager brand.

And the sleek tap system keeps the brew at the desired temperature, allowing it to be poured as if straight from the bar.

SYNEK have managed to get over 400 craft brewers from across the U.S to sign-up to the system, allowing users to go straight to their favourite brew-pub or brewery and fill up for the month.

A guarantee has been issued by the fledgling company promising that customers who don’t have a choice of at least three different craft brewers from which they can be supplied will receive their money back.

SYNEK are building funds on Kickstarter to roll out production of the system, which has been well received by the press and is looking set to achieve its $250,000 (£146,000) target within its time-limit of three weeks.

“It’s about giving the tools to the home and craft brewers to help spread their creation and make more money while doing it,” said Young.

“The best beer deserves to reach the consumer in the freshest form possible.”