10 of the best London beer gardens

There’s nothing like a shady beer garden to escape the summer heat of the city. Here are 10 of our favourite summer spots to get away from London’s hustle and bustle.

Today spending time at a  beer garden, taken from the name “Biergarten”, is a time-honoured tradition and a common feature of pubs and bars throughout the world.

Sprung from humble beginnings, the first beer garden originated in Germany’s Bavaria region in the 19th century at a time when brewing in the summer months was prohibited.

Albert V introduced the ban following a number of fires at breweries caused by the heat emanating from the boiling process.

Instead, brewers dug deep “cellars” in the ground fermenting their beer in barrels under ice blocks, topping it with gravel and trees to keep the land cool.

Later, the Bavarian King Ludwig gave brewers permission to sell their beer on the spot, and so the beer garden was born.

From central hot spots and swanky celeb haunts to unassuming hideaways, scroll through to discover some of London’s best  spots for summer sipping… 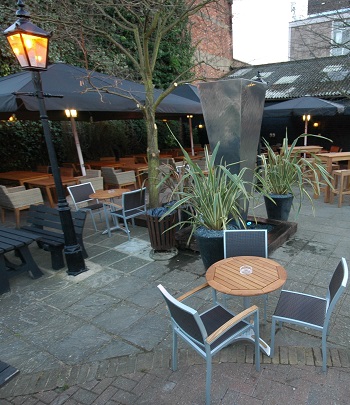 The Devonshire in south west London’s trendy Balham is well-known among locals for having one of the largest beer gardens in the area. Its spacious terrace and laid back atmosphere is the perfect place to kick back on a hot summers day. Better yet, in the summer months its purpose built barbecue fires up serving dishes including its signature burger and whole mackerel directly from the terrace. 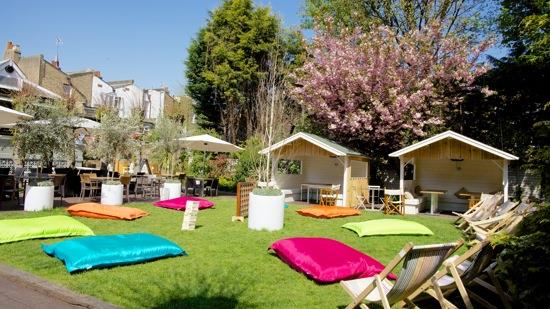 This bean-bag filled grassed oasis can be found in London’s Shepherds Bush area close to Ravenscourt Park and has “one of the most glorious pub gardens in all of London”, according to its owners. With deck chairs, swing seats and summer house style dining tables, The Eagle is made for lazy summer afternoons and warm summer nights. Managed by Geronimo Inns, its menu features better-than-your-average pub dishes accompanied by a reasonably extensive wine list. 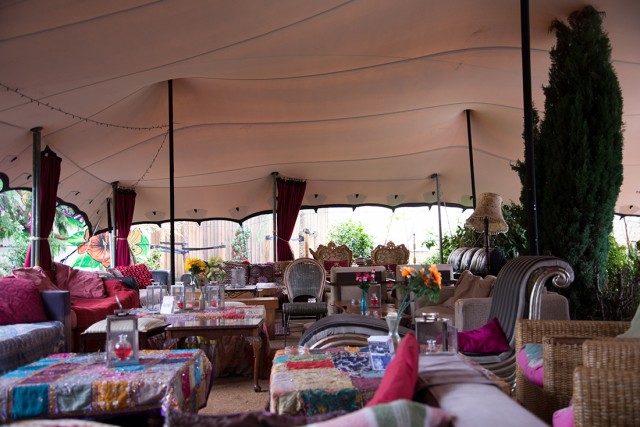 Release your inner hippy at Battersea’s Moroccan-esque Magic Garden – a tented haven filled with soft couches, pillows and oil lamps. The venue has a solid reputation among the music scene and regularly welcomes a variety of live acts, no doubt attracted by its undercover boutique festival vibe. Its menu changes monthly and is described as the “best of British with a Mediterranean twist” featuring dishes such as the Magic Garden burger and the halloumi and roasted vegetable burger.

A stone’s throw from the lapping waters of the Thames, The Ship enjoys a prime location beside Wandsworth Bridge with stunning views into the late-evening from its decked beer garden. Its outside area has recently been remodelled and now boasts a larger bar and sheltered seating booths. Its restaurant, headed up by chef Shaun Harrington, features dishes including the tantalising Old Spot pork belly with caramelised white cabbage, fondant potato, bacon dumpling and crackling, and the tempting chargrilled poussin confit leg with bok choi, lemongrass noodles and a coriander mousse. The pub hosts live music on Thursday nights. 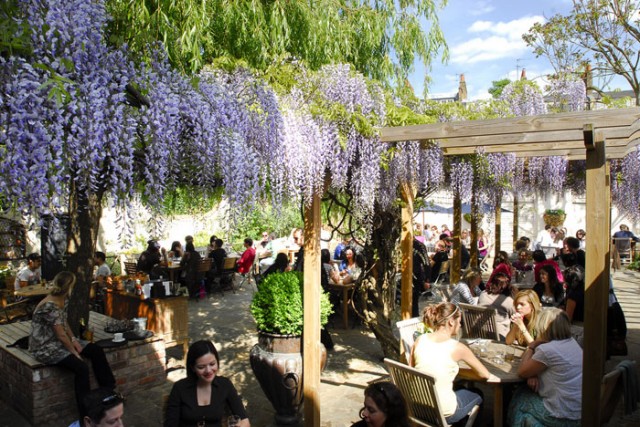 Located off Islington’s upper high street, The Albion is a reminder of the area’s Georgian past boasting log fires in the winter and a picturesque walled garden in the summer. Along with a mouth-watering menu featuring dished such as smoked haddock and salmon fishcake with peas a la Francaise and a soft poached hen’s egg, The Albion also carries an extensive drinks list featuring a wide selection of cocktails, wines and spirits. 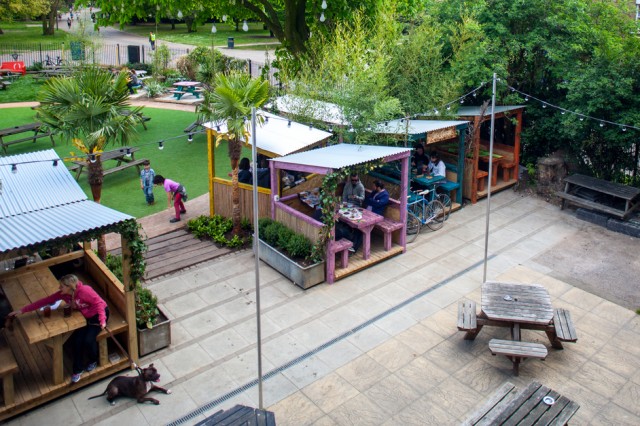 Victoria Park opened in 1845 and is well-known as the People’s Park, created for the residents of London’s East End, within which sits the People’s Park Tavern, described as a “village pub and brewery”, boasting a huge beer garden which backs onto the even bigger park. Known for its hearty meals, on-site micro-brewery and laid-back theatrical vibe, the tavern regularly hosts open mic events, scratch theatre performances, improv comedy, jam sessions and live art exhibitions. 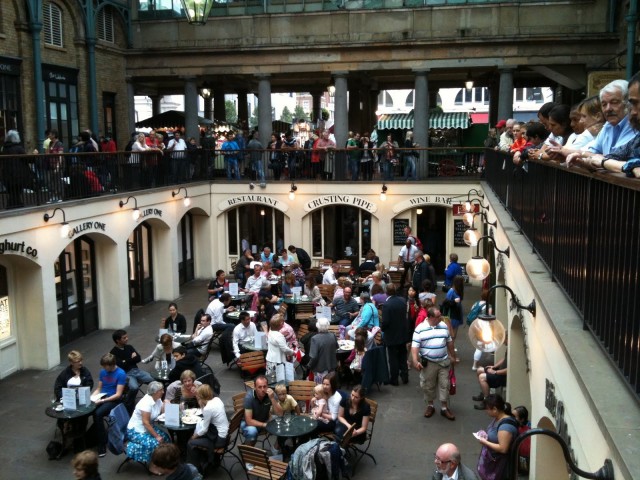 Sure to be one of the most bustling pubs in our top 10, The Crusting Pipe’s indoor-outdoor beer ‘garden’ is located smack in the middle of Covent Garden market under its famed canopy. The lower level of the bar has its own courtyard, overlooked by dozens of peering tourists. A quite place for a drink this is not, but it is a brilliant spot to soak up the atmosphere of London’s busting Covent Garden. Classically trained buskers regularly rock up to entertain the crowds while its close proximity to the National Opera House and London theatres make it the perfect place for a swift pre-show drink.

Aimed at the hip and trendy set, this split level decked beer garden, located close to London’s Kings Cross station, has its own outdoor bar accompanied by brightly coloured furniture and a barbecue. Perfect for sipping cocktails throughout the day, in the evening the venue transforms into a nightclub with a dance floor pumping out the tunes into the wee hours. 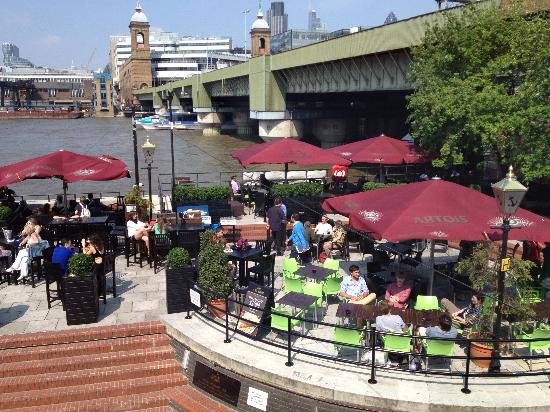 This historic pub, famed for being the spot where Samuel Pepys watched the Great Fire of London take hold on the city, boasts a delightful alfresco terrace directly overlooking the River Thames. Close to London Bridge, Borough Market and the Vinopolis wine tour, along with the Tate Modern Galleries, Shakespeare’s Globe and National Theatre, this Taylor Walker pub is the perfect pitstop for the weary tourist. Take in the views of the River Thames while tucking into a plate of fish and chips. 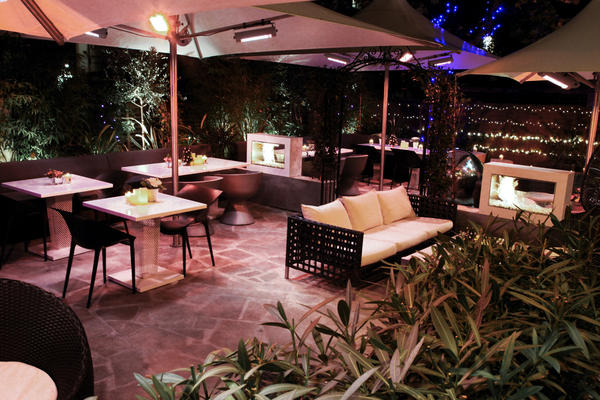 By far the most glamourous of our top 10 selection, The Phene is located in London’s swanky Chelsea and counts Hugh Grant, Sol Campbell and Mark Knopfler among its regulars. Built in 1859 by Victorian philanthropist Samuel Phene, the pub was bought in 2002 by property developer Robert Bourne for just over £2 million who ploughed a further £1.1 million into refurbishing it, turning it into a top-end pub with a stunning heated terrace complete with plush sofas and fireplaces. So loved is The Phene that when its owner submitted plans to turn it into a £20m home in 2012, its star-studded cliental raced to save it resulting in the plans being rejected and the pub instead being sold to the City Pub Company for a reported £4m.