A 124-year old poem about a mysterious beer brewed by an ancient Scottish tribe has been transformed into a graphic novel ahead of this year’s Glasgow Comic-Con convention.

The Heather Ale, written by Robert Louis Stevenson in 1890, tells the tale of a sought after beer brewed by a tribe during the iron age, as reported by the Herald Scotland.

Stevenson, a celebrated Scottish novelist, poet, essayist, and travel writer, was responsible for literary greats such as Treasure Island and the Strange Case of Dr Jekyll and Mr Hyde.

In the poem the ale, as desirable as it was, becomes the focus of an invasion by the King of Scots resulting in a bloody massacre and the loss of the brew’s recipe.

The tale has now been turned into a comic with the help of Glasgow Comic-Con event organiser and comic book publisher Black Hearted press and its sponsor, Williams Bros. Brewing Co.

Speaking to the Herald Scotland, Mark Boyle, operations director at Black Hearted Press, said: “To celebrate the biggest Glasgow Comic Con yet we wanted to do something completely different – like re-imagining the work of a famous Scottish writer for today’s comic book generation.

“While planning the event we shared the concept with Scott Williams who retold Stevenson’s ballad of the mysterious Heather Ale. Despite being written over 120 years ago, Stevenson’s poem has the perfect blend of action and intrigue. We were surprised that the poem hadn’t been transformed into a comic before.”

Williams Bros. Brewing Co. brewed their own version of the poem’s heather ale, also known as Fraoch – which is said to be Scotland’s oldest craft beer – 25 year’s ago in an attempt to turn the fabled brew into a reality.

Scott Williams, of the Williams Bros Brewing Co. added: “Williams Bros. has long been inspired by storytelling and legends when it comes to creating new beers. Now in its 25th year, it’s rewarding to see Fraoch and the poem go on to inspire a new generation and be interpreted for a completely different audience at the Glasgow Comic Con. 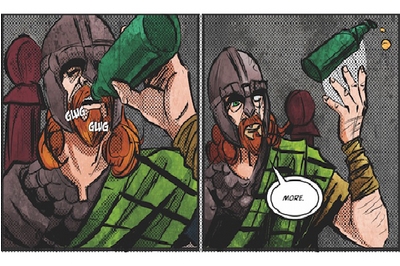 “The story and the beer may be decades old but the idea of pairing a beer with a comic is definitely novel.”

Black Hearted Press will print 500 limited edition copies of ‘The Heather Ale’, available to buy at the 2014 Glasgow Comic Con.