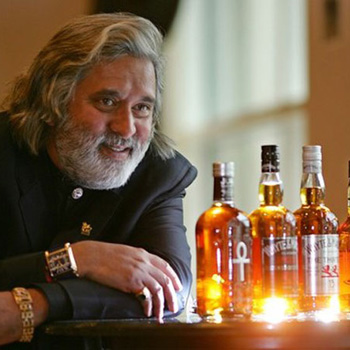 The world’s largest spirits group has launched a tender offer for 26% of USL’s shares, which, if taken up in full, would give Diageo 55% of the equity and place full control in its hands. Diageo’s chief financial officer, Dierdre Mahlan says the move will give the company “certainty of control”.

In 2012, Diageo took effective control of USL through a complicated deal that gave it some 27% of the shares. At the same time, United’s owner, Vijay Mallya (pictured), committed to voting with Diageo on the board, thus giving the UK group management of the company for a minimum of four years.

Diageo has been seeking to increase its stake in USL via small purchases on the Indian stock market, but the tender offer underlines how much importance Indian-born Menezes places on cementing a very strong presence in India.

In 2012, Diageo tendered for shares on the open market, which shareholders regarded as derisory and rejected en masse. Since then United Spirits shares have risen steadily in the expectation of Diageo returning with a much more attractive offer.

Bloomberg calculates that the price being offered by Diageo is at a 39% premium to USL’s earnings before interest, taxes, depreciation and amortisation in the past 12 months. That is more than double the level of deals in the sector in the past five years and is almost double the multiple of about 20 Suntory is paying for Beam.

This shows the importance Menezes places on becoming No 1 in India, especially as the takeover will restrict his scope for other than niche deals elsewhere in the near future. Even so, commentators in India are not convinced that Diageo will get all the shares it wants at the present price. They believe some holders will want an even bigger premium for what they see as a one-way bet for Diageo.

Analysis from Bloomberg suggests that Diageo has cash of about £1.77bn in its coffers but the deal will be funded by loans and longer-term debt.

Part of the price will be offset by the enforced sale of Whyte & Mackay, the next stage of which is due later this week. UK competition authorities have required Diageo to sell off the scotch brand as part of approval of the USL takeover.

USL bought Whyte & Mackay in 2007 for what then was thought to be the very high price of £595m as Mallya attempted to bolster his global ambitions. Market sources suggest that there are five potential buyers in the running, with an expected price of about £400m.

They are Lion Capital, investment break-up specialists KKR, Thai Beverage , Davide Campari-Milano and an unnamed Russian company. The latest offers are due to be submitted on Thursday,

Meanwhile, objections to Diageo’s original purchase of USL shares and the deal with Mallya are wending a slow way through India’s legal system. They claim in essence that some of the proceeds should have gone to creditors of other Mallya companies such as the disastrous Kingfisher airline. That said, the proceedings are unlikely to have a material effect on Diageo’s plans in the sub-continent.