Chotto Matte means “just a moment” in Japanese; a fitting name for a place that prides itself on quick fire Nikkei cuisine. Last year, London went wild for Peruvian food in all its guises. This year, a trend is emerging  for Japanese-Peruvian fusion, or Nikkei restaurants. Like Brazil, Peru boasts a large Japanese population, meaning East Asian influences have seeped into its culinary traditions. 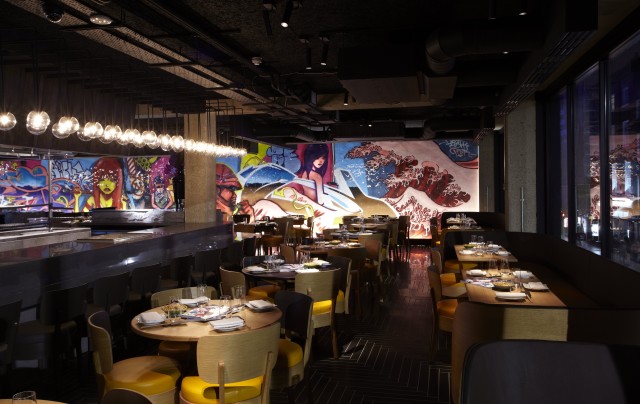 Interiors are industrial chic and rely heavily on monochrome. Ceilings, bars and staff uniforms are black, while pillars are crafted from concrete. Breaking up the black-and-white on the ground floor is an eye-poppingly bright mural by Tokyo-based graffiti artist Houxo Que covering the length of the restaurant.

On my visit in late November, the space was buzzing with City suits and glamazons sipping yuzu-infused cocktails. Ushered up a spiral staircase, my dining buddy and I were placed far from the madding crowd where the atmosphere was animated rather than raucous.

The smell of truffle oil and crushed garlic heavy in the air, we were steered by our enthusiastic waitress in the direction of the nine-course tasting menu, which began with tiny tacos designed to be dipped in a trio of sauces: tuna spicy miso, snow crab yuzu and miso vegetables, all of which were flappingly fresh and polished off in under a minute.

The scallop tiradito meanwhile, was a work of art and a perfect example of Peruvian and Japanese flavours fusing to great effect. The iridescent slivers of silky, lime-soaked scallop were vivifying, with golden nuggets of corn adding texture and rings of jalapeño a lick of fire.

No nod to Peru would be complete without a cameo from its national dish; ceviche. Chotto Matte’s version, featuring prawn, sea bass, sweet potato, coriander and a lip-smacking citrus sauce was zippy and zingy with a satisfying kick of heat.

The prosaic sounding prawn spring rolls were anything but, their crispy golden shells crammed with piping hot sweet meat and served with a ponzu salsa so moreish, I ended up licking the bowl.

On the sommelier’s recommendation, we enjoyed a half bottle of sparkling saké that tasted like fermenting cider apples. Shunning wine in favour of cocktails, head bartender Fabiano Latham endeavoured to pair our libations to some of the nine taster dishes.

With many of his creations inspired by the East, the Samurai Barrel blended Rittenhouse Rye with Chartreuse and yuzu marmalade in a delicious balance of sweet and bitter. At the digestif end of the spectrum, the Cherry Martinez, with its thick layer of candy pink foam, tasted like boozy cherry ice cream and proved devilishly decadent.

With Zdesar having worked at Nobu, expectations were high for the black cod. It passed the litmus test and proved a highlight in an impressive line up of dishes. Served with a sweet yellow chili miso, the unctuous sauce complimented the cod’s silky white meat, leaving me with a deep yearning for more.

While perfectly pink and doused in coriander and lime, the lamb chops seemed to jar with the rest of the menu, appearing more Indian than Incan in nature.

Ending on a sugar high, my chocolate mousse with praline ice cream wouldn’t have looked out of place at a Joan Miró retrospective with chef indulging his artistic side via swooshes of chocolate and semicircles of orange sauce.

Chotto Matte won’t ring everyone’s bell. From its gargantuan size to its eclectic, soul-heavy soundtrack blasting out of the speakers, it’s like the new kid at school that’s trying a little too hard to impress.

On the food front, it offers moments of pure joy, from the rich, indulgent black cod to the silky, citric scallops, the cooking shows real promise for a fraction of the price of Nobu. If frenetic, graffiti-filled spaces are your thing, then you’ll get your kicks here, but think again if you’re considering it for a cosy catch up.