Kestrel Lager, which was popular during the 1980s and 1990s, is to be relaunched after the brand was bought from its former owners Wells and Youngs. 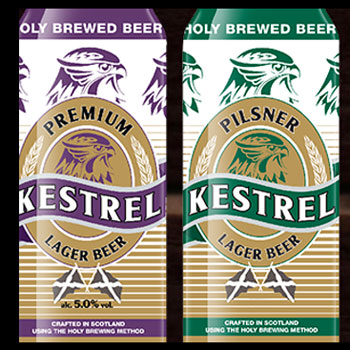 Nigel McNally, former managing director of Wells and Youngs, bought the brand and is now “returning it to its Scottish roots”. The lager will be brewed on a site in Glasgow, next to the city’s cathedral, where brewing dates back to 1556.

Kestrel is relaunching with a bigger range than in the past, including a “refreshing” low alcohol 2.8% abv lager and an alcohol free version. Kestrel Super, a 9% abv brew will return, with a “drink responsibly” message on the can and the range is rounded out with a “premium” 5.0% lager and a Pilsner.

The newly designed cans all carry a Scottish Saltire and McNally has confirmed the first variant will go on sale across UK independent retailers and off-trade.

On its website the company said: “The Kestrel brand is very proud of its Scottish heritage which is bound up with the history of the brewery and its surroundings.

“The brewing credentials of Kestrel lager beer are also firmly Scottish, as all of the barley used in the brew recipe originates from local farms and the water is sourced from Loch Katrine. This gives a consistency of beer quality every time, and also contributes to the economy of the local community.”

The brand will be promoted by the LightBrigade marketing agency and managing director, Alan Twigg, told Metro: “We will be looking to get it to new drinkers who don’t recall it from when it was in its pomp in the 1980s.

“There’s lots of brands relaunched with nothing other than retro values as their basis but this is part of a complete re-engineering with a new look and new proposition.”

Kestrel has also entered into a long-term partnership with the RSPB to “help fund research into the possible causes behind the declining numbers of the kestrel”.