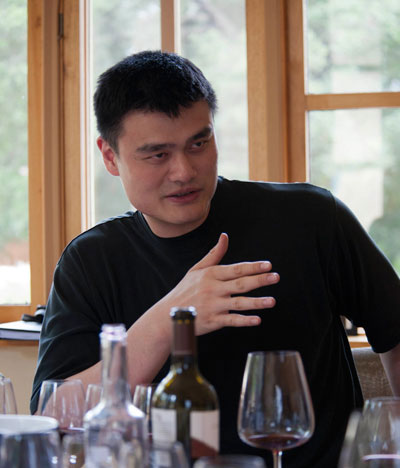 “This has been an exciting year for us. Our goal from the beginning has been to produce wines that showcase the quality of Napa Valley and represent this amazing wine region,” said the 7 foot 6 sports star.

“I think we’ve done that here, and done it well, creating something that we are all very proud of,” Ming added.

Both wines made their debut in China this January through Pernod Ricard.

Distribution in the US will be spearheaded by Regal Wine Company in California, as well as key wholesalers in additional states. Ming will also offer small allocations to those who join the Yao Family Wines mailing list.

Both wines are aged in new French oak, with the Family Reserve Cabernet Sauvignon spending two years in barrel.

The labels feature a hand-drawn illustration of the Napa Valley along with the ancient Chinese character for “Yao”.

“We’re thrilled to introduce our wines to the US market,” said Tom Hinde, director of winemaking at Yao Family Wines.

“Since our launch, we’ve enjoyed a tremendous reception in China and both wines have been very well received by critics and the wine trade,” he added.