Atomic bomb tests conducted by the US military in the 1950s found that beer and soft drinks remained drinkable after a nuclear explosion. 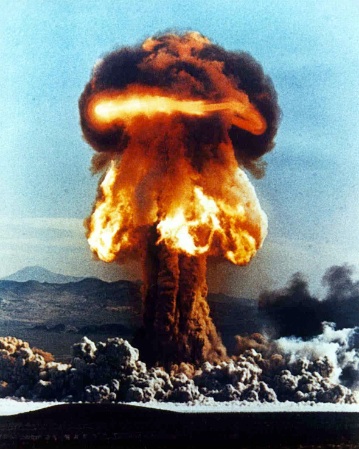 The experiment took place as part of Operation Teapot in 1955, with cans and bottles of beer and soft drinks placed in three positions ranging from 0.2 miles to two mile away from the bomb-site.

Entitled “Project 32.2a. The Effect of Nuclear Explosions on Commercially Packaged Beverages”, the purpose of the tests was to find out what survivors would be able to drink in the aftermath of an atomic bomb attack.

As the introduction stated: “The plans for Operation Teapot at the Nevada Proving Grounds during 1955, included a series of Civil Effects Tests, one of which, Project 32.2, covered the exposure of packaged food products.

“As this project developed, it was expanded to cover representative commercially packaged beverages, such as soft drinks and beer, in glass bottles and metal cans.”

The report added: “Consideration of the problems of food supply show the needs of humans for water, especially under disaster conditions, could be immediate and urgent.

“At various times some consideration has been given to special packaging of potable water, but since packaged beverages, both beer and soft drinks, are so ubiquitous and already uniformly available in urban areas, it is obvious that they could serve as important sources of fluids.”

The recently released documents were picked up on by the historian Alex Wellerstein who runs Restricted Data and they appear to show that the drinks at all three stages remained largely unaffected by the explosion or radiation.

Some of the bottles closest to the blast had been shattered or destroyed along with their surroundings but the taste had apparently altered very little and the radiation considered “within the permissible limits for emergency use”.

However those furthest away showed no signs of change whatsoever and even retained their carbonation and airtight seal.

The report noted: “Examination made immediately upon recovery showed no observable gross changes in the appearance of the beverages.

“Immediate taste tests indicated that the beverages, both beer and soft drinks, were still of commercial quality, although there was evidence of a slight flavour change in some of the products exposed at 1270 ft from GZ [Ground Zero]. Those farther away showed no change.”

However, the drinks were sent away for further testing in laboratories (implying that the “immediate test” involved a person or persons drinking from the beers and cans there and then).

The resulting report concluded: “Representative samples of the various exposed packaged beers, as well as un-exposed control samples in both cans and bottles, were submitted to five qualified laboratories for carefully controlled taste-testing.

“The cumulative opinions on the various beers indicated a range from ‘commercial quality’ on through ‘aged’ and ‘definitely off’. All agreed, however, that the beer could unquestionably be used as an emergency source of potable beverages.

“Obviously, if a large storage of such packaged beers was to be trapped in a zone of such intense radiation following a nuclear explosion, ultimate usage of the beverages beyond the emergency utility would likely be subject to review of the taste before return to commercial distribution.”