González Byass has launched a range of aged fino Sherries under the name Palmas. 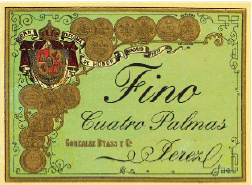 Named after the “palma”, or chalk line, which Sherry bodegas commonly use to mark a fino of particular finesse and delicate aroma, the Palma range features four different expressions.

At six years old, the youngest is Una Palma, of which the company has released a total of 200 nine litre cases at a retail price of £12 per bottle.

The Sherries have all been bottled in 50cl clear glass, designed to show off the colour of the fino inside. The labels are based on some of the oldest artwork from the González Byass archives.

Setting this launch within the context of the company’s recent “En Rama” initiative, Jeremy Rockett, marketing manager for González Byass UK, remarked: “En Rama showed a definite appetite for interesting products outside the norm. It gave us courage there’d be a market for these.”

Stressing the difference between the two products, Rockett noted that while En Rama is simply an unfiltered expression of Tio Pepe, it is the age of the Palmas which sets these wines apart from other fino styles.

While the Una, Dos and Tres Palmas all started life in the Tio Pepe solera, the rarest Cuatro Palmas has been drawn from six special barrels from the bodega, known as the “Museo Solera”.

The scarcity of barrels with sufficient flor to protect the fino accounts for the diminishing quantities of each Palmas style with age.

Having selected the barrels, González Byass winemaker Antonio Flores drew off the wines from cask during the “saca de otoño”, when the flor layer thickens again after the heat of summer. The wines were then bottled unfiltered and unclarified.

As with the En Rama, the three youngest Palmas are recommended for consumption within six months. However, at over 18% abv, the Cuatro Palmas is technically classed as an amontillado, albeit an older style even than the González Byass 30 year old Del Duque expression. This oxidised and therefore more stable state gives the Cuatro a longer shelf life, suggested at up to two years.

While the En Rama has so far been allocated mainly to prestige accounts, Rockett said that the company had made an effort to broaden the distribution of Palmas, noting that in particular, “We’re talking much more to restaurants outside the Spanish trade.”

Outlining the food matching possibilities for the Palmas range, Rockett suggested: “The first three would make great aperitifs or go with slightly heavier dishes than normal fino like jamon or rice dishes.”

By contrast, he remarked: “The Cuatro Palmas is probably a drink for savouring on its own after dinner.”

The Palmas range was launched in the UK ahead of its release to the Spanish market this coming weekend.