The JW Marriott on London’s Park Lane may not be the first place you would consider for an excellent steak and a laid-back atmosphere, but you’d be wrong. 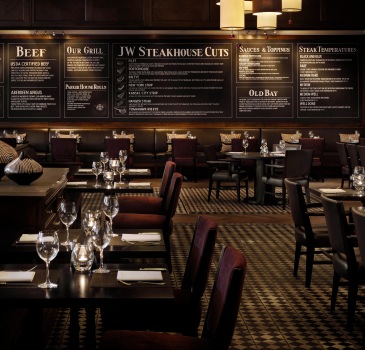 The restaurant itself is composed of one large and spacious room with windows looking out onto Park Lane. Tables are close enough to feel busy and jostling, but far apart enough to feel private – always a good balance.

As I waited for my dining companion I sat at the bar where, after a slight shaky start when the barman blinked unknowingly when I asked for a Negroni, I was rewarded with a deep coloured Campari-strong Negroni after the head bartender took matters into hand.

Promptly afterwards a bowl of fresh, hot buttered salt-and-pepper popcorn came along. Now I really started to feel like I was in an American steak house.

While waiting, I chatted to the barman about the impressive bourbon collection the bar had and found him to be knowledgeable and enthusiastic.

When my hungry plus-one finally turned up, he ordered a Manhattan with the house bourbon, Maker’s Mark. This, like my Negroni, was well made and packed a sizeable punch, barely cushioned by the single maraschino cherry garnish.

Now for the food. As we took to our table, we were instantly brought menus and given a courtesy minute to peruse before our friendly waiter stopped by to talk us through the options.

I’d had my eye on the 32oz “Tomahawk” ribeye steak since I’d first looked at the menu, and was pretty sure nothing could talk me out of having that. Again, I was pleasantly proved wrong.

The happy chatty Giovanni explained the best way to get an idea of the variations in their cuts of meat was to have a couple of different cuts on a sharing board with a selection of sauces and sides. Who were we to argue with such sound logic?

As for the starters, they were an easy choice, both of us opting for a fishy entrée. I went for the tuna tartar with avocado and lime dressing, while my companion went for half a dozen rock oysters.

While waiting we had a freshly baked focaccia brought to our table – a welcome sight at this stage after having got our juices flowing courtesy of the cocktails and a good long stare at the saliva-inducing menu.

The tuna came in a square with a layer of mashed avocado on top with the lime sauce round the sides. I had a 2010 Sauvignon Blanc from Dog Point, New Zealand, which was lovely and bursting with gooseberries on its own, and worked wonders with the fat in the tuna and the avocado, bringing a buttery fullness to the wine.

The oysters came with a glass of 2008 Sonoma Cutrer Chardonnay, a bold pairing but one that ultimately came off brilliantly.

The oysters, appreciated even by me who has an irrational squeamishness about such food, were big, fresh and salty; just as they should be.

And then onto the much anticipated steak. The bar had been set very, very high in our carnivorous estimations as we had previously perused the menu – and the prices – for these bad boys. We had finally opted for the fillet and the New York Strip (sirloin), both as rare as they dared.

The meat arrived accompanied by a tower of onion rings, fat chips, béarnaise and the bourbon and peppercorn sauce. These were washed down with a glass of Washington State Chateau Ste Michelle Cold Creek Cabernet Sauvignon 2007 – gloriously fruity with the New York Strip; and the Stag’s Leap 2008 “Hands of Time” Napa Valley which matched the fillet beautifully with lovely silky tannins.

The meat really was the star of the show. It was succulent, flavoursome and generous in portions and, needless to say, cooked to perfection. The sauces were freshly made and rich in flavour, but didn’t overpower the meat. It made all those second rate fillets that passed for previously acceptable pale in comparison (the beginning of an expensive predilection, I fear…).

After our plates were cleared we sat, groaning, holding our also groaning bellies for a while before the waiter presented us with the dessert menu. I wonder if the phrase “eyes bigger than your stomach” was ever so fitting as that moment.

Barely able to speak, let alone move, so full of steak, we ordered the house speciality, the cheesecake, and at the 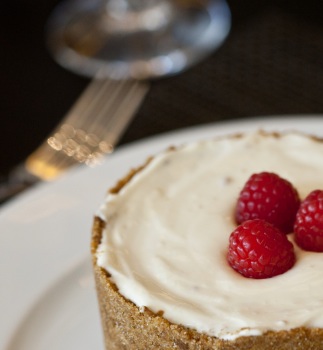 recommendation of our eager-to-feed waiter, also the chocolate brownie. He assured us that everything we didn’t eat (which was likely to be a lot) would be put in a doggy bag for later.

And so onto the last leg of our Park Lane steak adventure. The cheesecake was rich but surprisingly refreshing and zingy and literally melted on the plate with mascarpone goodness.

Similarly keen to escape its mould was the brownie that was hot and completely liquid under the light crust.

These came with a glass of Tokaji and Taylor’s 1994, the former a great match with the cheesecake, while the Port and the brownie together created a sort of Black Forest gateau goodness.

Admitting defeat half way through the cheesecake, it was duly stowed away in a doggy bag for breakfast and we moved onto the whiskey.

I went for the Jim Beam small batch selection which included Bookers, Bakers, Knob Creek and Basil Hayden’s which offered a lovely tour of the different facets of the Jim Beam portfolio, while my plus one went for a 70% abv(!) Buffalo Trace beast of a bourbon. The bar staff were knowledgeable and clearly enjoyed talking us through the different whiskies.

The sum of the constituent parts (meal, venue, service) was greater than the whole. While not cheap – but it never was going to be given the location – it was a fun evening with phenomenal wine and serious steak. Highly recommended.