Novikov Restaurant Group has unveiled an early glimpse of its first restaurant venture outside Russia. 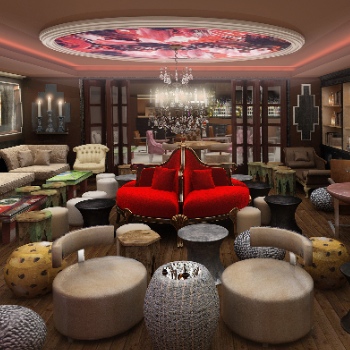 Announced in June last year, the ambitious project from restaurateur Arkady Novikov was originally due to be completed by early 2011, although this has since been pushed back to November.

His firm has now confirmed that the three storey venue in London’s Mayfair will house three separate operations: an Asian restaurant, an Italian restaurant and the Novikov Bar.

Adjacent to the Berkeley Street entrance, the 130-seat Asian restaurant has been designed using natural materials with an open kitchen intending to recreate the atmosphere of an Asian food market.

Downstairs houses the Italian restaurant, conceived in the style of a village trattoria with a large wooden oven at its centre. Alastair Keir, of project managers Keir Townsend, explained: “Complex state-of-the-art lighting systems will change the atmosphere from sunrise to sunset, from season to season.”

Meanwhile the Novikov Bar promises a more eccentric feel, filled with a collection of furnishings from various countries and periods.

When the plan was first unveiled, Novikov, whose firm operates more than 47 restaurants in and around Moscow, commented: “London is renowned for the diversity and quality of its restaurant culture, and is home to some of the best restaurants in the world.

“Also, as one of the great cosmopolitan cities, London was a natural choice as a location for our first restaurant outside of Russia.”