Suvari signs up for the Captain

Diageo is teaming up with Hollywood actress Mena Suvari to launch a new global multi-media campaign for its Captain Morgan’s Spiced rum brand. “The Captain’s Island”, a campaign run via the Captain Morgan Facebook page, will give the brand’s fans an opportunity to win a trip to a private Caribbean island and a share of US$15,000.

Suvari has been brought on board to help tell the story of “The Captain’s Island” .

The campaign, also supported across a variety of platforms including TV, online and experiential, will run in 13 different markets across the world – US, Canada, UK, Ireland, Germany, Austria, Czech Republic, Denmark, Russia, Argentina, Mexico, Peru and Costa Rica. 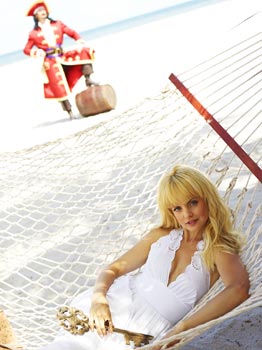 Suvari, currently filming American Reunion (the fourth film in the American Pie series), will play a key part in getting news of “The Captain’s Island” to consumers and encouraging them to participate via media interviews, photoshoots and through her appearances in a number of branded online videos.

Suvari will also be present on “The Captain’s Island” as Captain Morgan’s island reporter, interviewing consumers who have made it that far and commentating on highlight videos from the final.

Captain Morgan has commandeered an island in the Caribbean and contestants on the island will participate in a series of beach and island themed challenges.

There will be five challenges and the winning team from each will receive a chest that may or may not have the US$15,000 prize fund inside.

At the end of the trip, each winning team will open their chest, revealing who gets the share of The Captain’s bounty.

Russell Jones, global marketing director for Captain Morgan, said: “We know our consumers are highly active in social media and love sharing stories via Facebook so that’s why we’ve chosen this as the route for entry.”