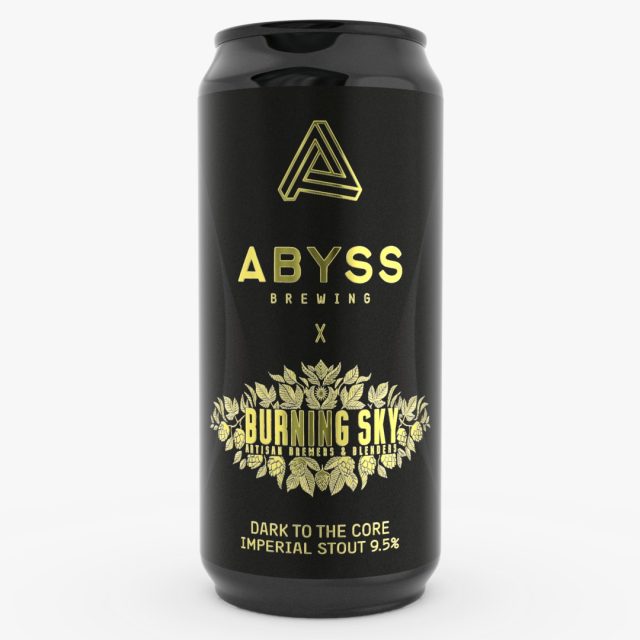 The beer, which the brewers are calling a 9.5% ABV “imperious” stout was brewed at Abyss Brewery in Lewes with Mark Tranter from Burning Sky uses a complex range of dark chocolate malts, Munich, Maris Otter, Cara and has been hopped with Chinook in the boil.

The plan for the launch includes the beer becoming available at the Abyss taproom and a selection of excellent pubs of their choosing from Friday the 13th to kick off what the brewers have coined “the weekend of darkness”.

Speaking to db, Abyss director and co-founder Andy Bridge, who started Abyss with Andrew Mellor six years ago, said: “It’s dark, it’s imperious and we’ll be launching the beer this Friday 13th January in the Abyss and beyond.”

He explained: “Mark’s beers and his general outlook on the brewing industry have been a great inspiration to us, so it meant a lot to brew together. We figured out Andrew [Mellor, Abyss co-founder] took over from Mark as head veggie punk chef of the George Pub, Brighton back in 1997. Both smashed out veggie and vegan burgers for the likes of Coogan, Orbital and Supergrass a long time before ‘plant-based’ was a thing. That was just before he started brewing the first Dark Star beers up the hill under the Evening Star. Chefs turned brewers, brewing under pubs…a well trodden path it seems.”

Tranter told db: “It has been great to strengthen relationships with local breweries over the last few years and collaborating with Abyss in December just added to that. The beer is a deliciously smooth and decadent imperial stout – launching at a foul time of year when we all need some cheering up.”

Abyss revealed that there is a plan to host an informal tasting of Dark To The Core alongside some Burning Sky beers in the Abyss taproom at the brewery in Lewes around 5pm on Friday 13 January with the brew team and that the beer “will also be pouring simultaneously at these fine public houses so you can taste the darkness all the weekend in Lewes and Brighton: Pelham Arms, Lewes; Prince Albert, Brighton; Evening Star, Brighton; The Independent, Brighton; The Pond, Brighton”.

Bridge added: “Cans will be available nationally through our network of loyal trade customers and in the Abyss webshop. If you’d like to launch the cans in your fine establishment we’ll tag you this week on the networks.”