Father and son team, James and Jack Rackham of Emporia Brands have spent the last year working with Gérard Pujau at Sempé, blending and hand-selecting casks especially for the UK market. Douglas Blyde finds out more… 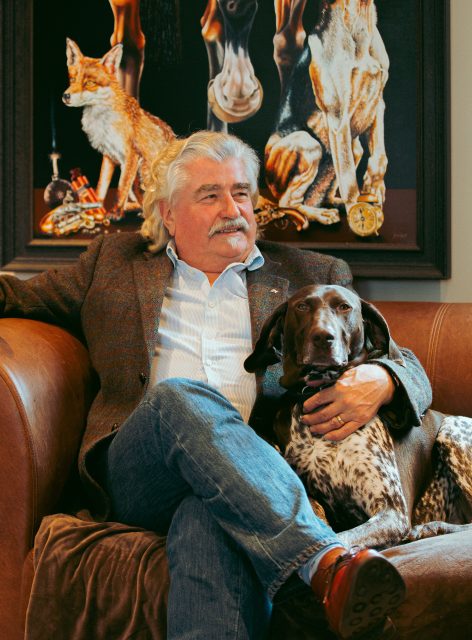 What is your career history?

I first worked with my father, Arthur Rackham Wine Merchants, going on to spend a decade running his 15 London stores while developing the wholesale business and a new wine club. I went on to found “Emporia Brands” in 1984 which started as an own-label, supermarket-focused business for Armagnac, Calvados and Cognac. By 2000, we had become a full-blown premium spirits agency. Following in the family footsteps, my son, Jack joined six years ago and has been taking us to new levels.

What has been Jack’s contribution to Emporia?

Jack started at Emporia as Commercial Director, building an awesome team of ex-bartenders for Emporia’s on-trade business. His mixology background drove Emporia‘s mission for innovation, and he heads up new product development in conjunction with national supermarkets’ own label gins and liqueurs. His journey to Emporia is perhaps interesting: he studied theology at university and was heading to The Church, but in his second year I invited him to a summer mixology school. When he graduated I asked him what he wanted to do he said “bartender”, so I introduced him to my friend, Jules at Mahiki which was the best rum bar in London and he got a job as barback. After working his way to bar manager, he went to Dubai for six years, running luxury bars, representing Grey Goose brand ambassador and winning Middle East Bar of the Year! Eventually, he returned to join the family firm.

How did you begin working with Gérard Pujau at Sempé?

I worked with Bruno Gazaniol since 1988 – he is a French non Executive Director of Emporia. He retired in January from Pernod Ricard as the director responsible for the Société des Produits d’Armagnac, which was sold last year. He was our matchmaker with Sempé and Gérard as he knows the team so well. In terms of how we worked with Gérard and his team, we looked at what he had, his blends and we worked on what we thought would be the best blend of Armagnac given his huge liquid resources. He has Bas Armagnac as his primary source, with some of the best growers. In July this year we started work on our blends – it was a dream as there was so much to work with, and Gerard’s bosses were 100% supportive as I pushed the blend and age to the ultimate for VS and VSOP.

It was inspired by my passion for seeking out authentic spirits and our previous success with Daddy Rack Tennessee Straight Whiskey. We launched the limited edition Single Barrel Cask Strength Daddy Rack Tennessee Straight Whiskey in November 2021 and the reaction was huge! This type of release for whiskey and rum is always well-received, and so I thought “Why not Armagnac?” A 10-year-old Single Barrel Armagnac is such a different game for anyone who loves the real deal. Plus, at Sempé, we have all the dynamics necessary to make this work: the grape mix, the vineyard locations with a complexity of terroir in both Bas Armagnac and Ténarèze. The team at Sempé loved the idea, it being ground-breaking, to move away from the classic single vintage blend to something of real traceability, being unadulterated from vine to bottle. I lay down the first three barrels, two from Bas Armagnac and one from Ténarèze which I found within the huge resource of aged Armagnacs which Sempé has in its cellars. A careful process to reach this selection: I initially shortlisted one in 10 barrels for this programme; we have launched just three of these so far and will be back for the next tasting to shortlist the next three. We have one of the best reserves of aged Armagnacs in Gascony. What an amazing resource which I want to make the most of – so we’re launching this limited release, but it’s a sustainable model that we can even fine-tune to specific customers. A genuinely unique approach for Armagnac. 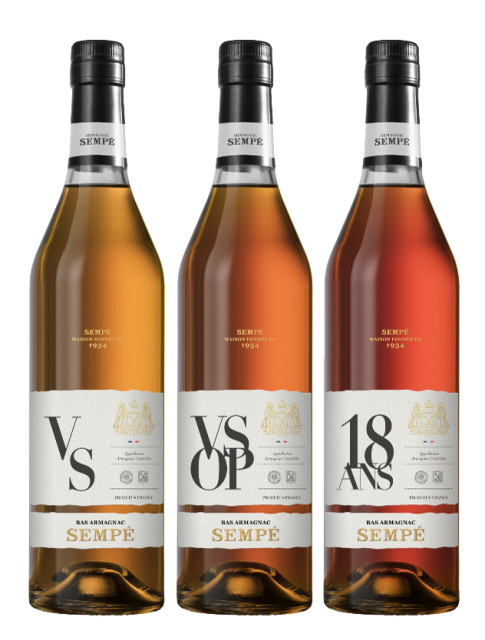 When did you select/lay down the first three barrels for the cask-release?

I finalised the Single Barrel in September. We had several sessions from a starting point of 100 barrels to meet my brief, and then I went on to pick the three which I thought were exceptional.

Historically, did Armagnac come before Cognac?

Yes, indeed Armagnac was the first brandy of France. The region was on the route of the Moors who brought their alembics for distillation to Europe. However, it was really when the region was under English control during the Norman and early Plantagenet period that production got going. The English troops, and perhaps a few Scots and Welsh, gave the idea of distilling their wine to send back to England and it was England’s first love, long before Cognac appeared.

What are the key differences between Cognac and Armagnac?

Even at production level, Armagnac is so different from Cognac, coming from a much more diverse, fragmented landscape, with many grape farmers, some of whom make and sell their own Armagnac rather than being in the control of larger international brands. From a flavour perspective, it is influenced by both the different terroir of Armagnac, a wider diversity in grape varieties used and the distillation process. The majority of Armagnac producers favour short column stills (as opposed to the pot stills prevalent in Cognac) – this maximises the congeners present in the eaux de vie produced, giving character and strong flavours to the base spirit, which can then be refined with cask ageing and blending.  I would say that Cognac is The Queen of French brandy: elegant and refined, smooth and perfumed, whereas Armagnac is The King: strong, muscular, but well-toned with grace and depth of character.

Why should consumers take time to discover Armagnac?

Armagnac represents a slice of history, with imports to England reaching back over 500 years. The local artisans defined it, we inspired it, and it has flourished since. For those not already familiar with Armagnac, it is a discovery worth making, being a serious drink enjoyed by those who love malt whisky, being expertly crafted and rewarding on taste. It doesn’t have to be enjoyed neat; it’s extremely easy to mix (try fresh orange juice over ice). Indeed, I blended our Sempé VS specifically for our bartender community to be able to reinvent classics such as an Armagnac Negroni or Old Fashioned. It’s also worth taking the time to discover the region itself. Not far from Toulouse or Bordeaux, it’s full of historic villages, castles from the Hundred Years’ War, outstanding local restaurants and bars, rolling beautiful landscapes and friendly people.

Who was a famous residents of the region?

D’Artagnan, the musketeer! The musketeers are the legendary heroes of Armagnac and actually hold a special significance for me, as I am also a Musketeer! I’m a member of the special order of international friends of Armagnac who meet in the ancient town of Condom. Here every year a hundred new Musketeers are inducted, including Ambassadors of State, Rock and Film stars, and artisans like me who work every day to represent the heritage of Armagnac and its unique charm.

What is “Floc de Gascogne”, and how should we drink it?

A classic aperitif from Armagnac being one-third Armagnac and two-thirds local grape juice. The Sempé Floc which is available now in the UK is made to a sixteenth-century recipe and is really delicious, served neat and chilled to kick off a meal. Jack has a whole host of cocktail recipes for it as well, as it’s a bartender’s favourite.

What other brands/categories does Emporia import?

Aside from Sempé, we are lucky to work with a range of different categories from gin, absinthe, market-leading liqueurs Boudier, gin, the no.1 rum worldwide, Tanduay, Provence vermouth, brandy, pastis and 100% agave tequila, Batanga. In addition, I am the founder (with Gerry Calabrese) of Hoxton, which now includes six unique spirits with a twist in the range. We are also very proud to represent Staritsky Levitsky, our Ukrainian vodka made just outside Lviv. It is a traditional and exceptional vodka, micro-distilled with Carpathian spring water and birch-filtered. Amazingly, they are still running despite all the disruption, and we are the no. 9 vodka with UK merchants and bars, pledging a contribution for every bottle to Ukraine war relief. As my Ukrainian wife says “Slava Ukraini!”

If not working in the world of spirits, what would you have done?

I would have been a monk in a monastery and created the next Benedictine.

Who from history would you love to share a bottle of First Edition with?

St. Dunstan, who was Archbishop of Canterbury in the tenth century. He was the most powerful man after the King and my inspiration for creating Mayfield Sussex Hop Gin, here in my beautiful village of Mayfield. Aside from being the local blacksmith, he built the first church here – I would love to share a gin and tonic with him and have his approval. Folklore also says he was the man who confronted the devil in our village and banished him/her…

The VS, VSOP, 18 and first of the cask-strengths are available via Master of Malt.