Trivento’s 2019 vintage of Eolo Malbec has almost finished its two years of bottle ageing, and is set to arrive in international markets this September.

The name ‘Eolo’ refers to the keeper of the winds in Ancient Greek mythology. Trivento’s oenological director, Germán Di Cesare, suggests that Eolo was “seduced” by the four-hectare site situated on the north bank of the Mendoza River in Luján de Cuyo, Argentina, which is why the wind has a major role to play in creating the area’s unique microclimate.

Clearly, Eolo was not the only one to notice the site’s potential. The vineyard was planted in 1912 by Italian immigrants to the area. More than a century later, their descendants are still harvesting by hand the Malbec grapes produced by these historic vines.

Planted with a low-trellis and double-guyot pruning system at a density of 5,500 plants per hectare, the old vines produce an average yield of 1.18 kilograms of fruit per plant.

“The Eolo vineyard is defined by its relationship with the river,” Di Cesare says. Indeed, the vines are irrigated by the water source, and the climate tempered by it, turning an otherwise arid region into one favourable to grape growing.

“Intense evaporation and river proximity combine to establish an average relative humidity of 50%,” he says. “The hottest temperatures of summer are moderated thanks to the influence of the river.”

Altitude also assists. Being 983 metres above sea level enables the fruit to cling onto freshness, and provides the best environment for what Di Cesare refers to as the “balanced maturation” of the Malbec grapes.

Named technical director of winemaking in 2017, and having been with Trivento for more than 20 years, Di Cesare has also been able to literally dig beneath the surface to discover what makes the Eolo soil so special.

“The soil was formed by ancient riverbeds,” he explains. “Sand and stones facilitate drainage, while clay bands provide sufficient water retention for plant needs.” While the sandy loam results in flavours of fruit and herbs with softer tannins, the clayey-silt of other zones lends the grapes characteristics of ripe black fruit, with dense, voluminous tannins. Blending the zones helps to strike the perfect balance.

Di Cesare has sought to enable Eolo to become a true expression of its place of origin: “In this wine, we find the unmistakable influence of the Andes, tradition, and the Cuyo region’s sun.”

The latter shone favourably in 2019. Though 2018 was celebrated as the “quintessentially Mendozan harvest” by Di Cesare, 2019 was even better. A cold, dry winter was followed by a cool, slightly humid spring.

During the summer, the average temperature for that year was 19.2°C, 3°C cooler than is typical for the season. The lack of heavy storms or hail was greatly beneficial to the overall health of the fruit. That autumn was characterised by its warm days, enabling the prolonged ripening of the grapes that Di Cesare sought.

The harvest began on 25 March 2019, and was carried out in seven stages to pick the grapes at the ideal level of ripeness in each of the vineyard’s zones.

But great grapes do not guarantee great wine. The utmost care is taken in Trivento’s winery to bring out the best
of the grapes without obscuring their distinct connection to the particular plot of land dedicated to the production of Eolo. As Di Cesare puts it: “We want to respect the expression of the vineyard, its 100-year history, its soil profiles, while supporting the unique personality of each vintage.” 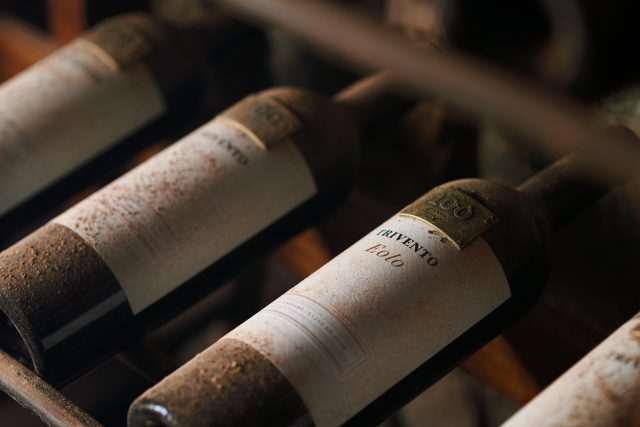 Rollers are used to softly crush the grapes. Then, a five-day cold maceration is followed by a fermentation at 10°C, then a subsequent fermentation over 15 to 17 days in stainless steel tanks at 24°C-27°C. To ensure that the wine has its distinct violet hue with a blue tinge, a further maceration takes place for five days.

This is then followed by 18 months of barrel ageing. Half of the wine is racked into oak barrels (consisting of one third new oak, one third used once, and one third used twice), the other half goes into third-use foudres. After this time had passed, 10,500 bottles were produced, in November 2020.

But the odyssey doesn’t stop once the wine is in the bottle. The bottles are kept for two years before release so that the red fruit aromas and floral characteristics can develop. An ageing potential of a further 15 years means that the “long-awaited fruits” of the wine, as Di Cesare puts it, can be enjoyed for more than a decade to come.

In truth, Eolo is more than a century in the making. Though it takes its name from the divine keeper of the winds, water, earth, and vineyard management each play a role. Beyond that point, it is up to Di Cesare to tread the tightrope of creating a complex expression of Malbec, one that is distinctly of its terroir.