Now that we’re well into fireside sipping season, Geoffrey Dean reveals the key differences between Islay’s liquid gems, from peaty and smoky to fruit-forward, as well as where to try them. 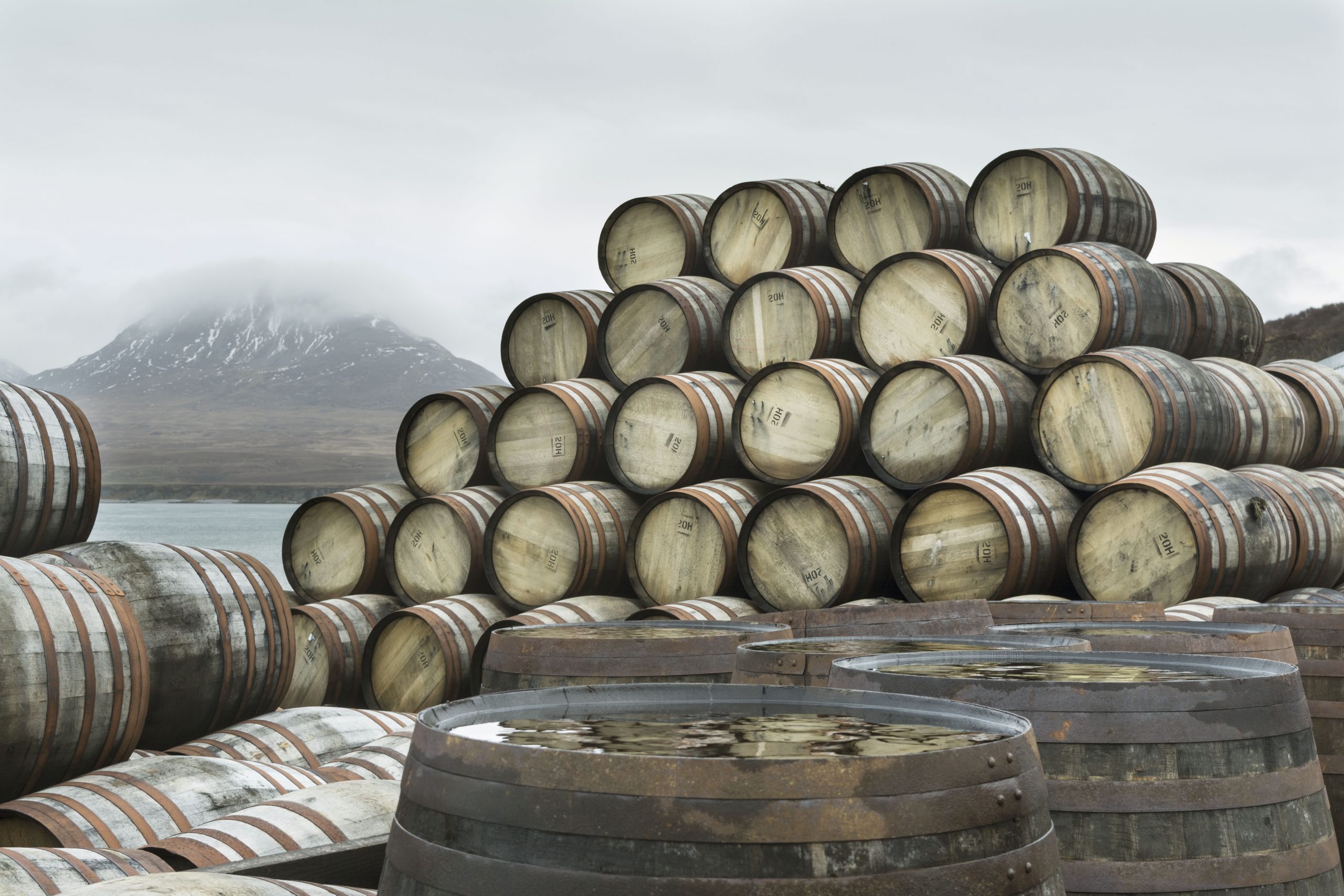 For the whisky lover, there is nowhere quite like Islay. The southernmost island of the Inner Hebrides, which lies just 25 miles from Northern Ireland, has nine distilleries, with a tenth under construction and a couple more in the planning phase.

In addition, the old Port Ellen distillery is being redeveloped and brought back into production. Several Islay brands enjoy legendary status among cognoscenti, and each one has its own special characteristics and different on-site
experience.

Islay is Scotland’s fifth biggest island, being 25 miles from top to bottom and 15 across at its widest point. Throw in the friendliest of local residents (who number 3,250), a variety of accommodation from cottages to comfortable
hotels, one of Scotland’s best golf courses (the Machrie) and some stunning scenery, and you have all the ingredients for a memorable whisky tourism holiday. 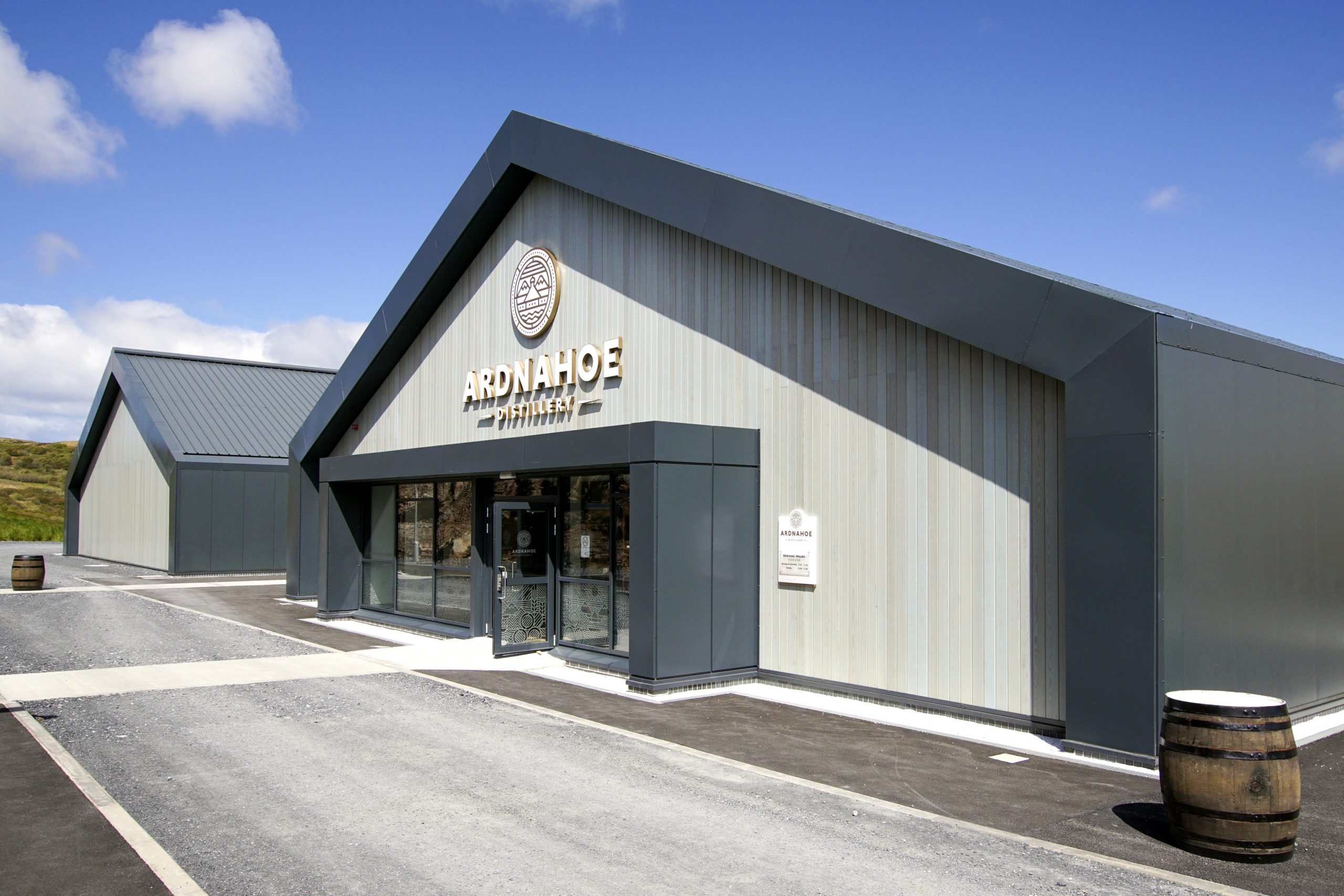 Islay’s newest distillery started production in 2018. The owners had a ceremonial opening of a single malt cask in early November – to mark its ascension to Scotch status after the obligatory three years maturation in oak – but do not plan to release any whisky for sale for another couple of years. Their elevated visitor centre should not be missed, for its views to the east towards the neighbouring island of Jura are breathtakingly beautiful. A very large lounge and restaurant area are ideal for morning coffee or lunch, while multiple experiences are available as Paul Graham, the visitor centre operations manager, explained. “We have the most varied experiences of all the distilleries on
Islay,” he said. “You can go right through the production process; you can do the warehouse experience, the blending experience, food and whisky pairings. There is a daily tasting at 3pm from wine, Bourbon and sherry casks as well as two tours per day, at 10am and 4pm. Ours is a pretty unique Islay whisky, with fruit at the front followed by smoke at the back – a sort of role reversal of your usual Islay single malt.” 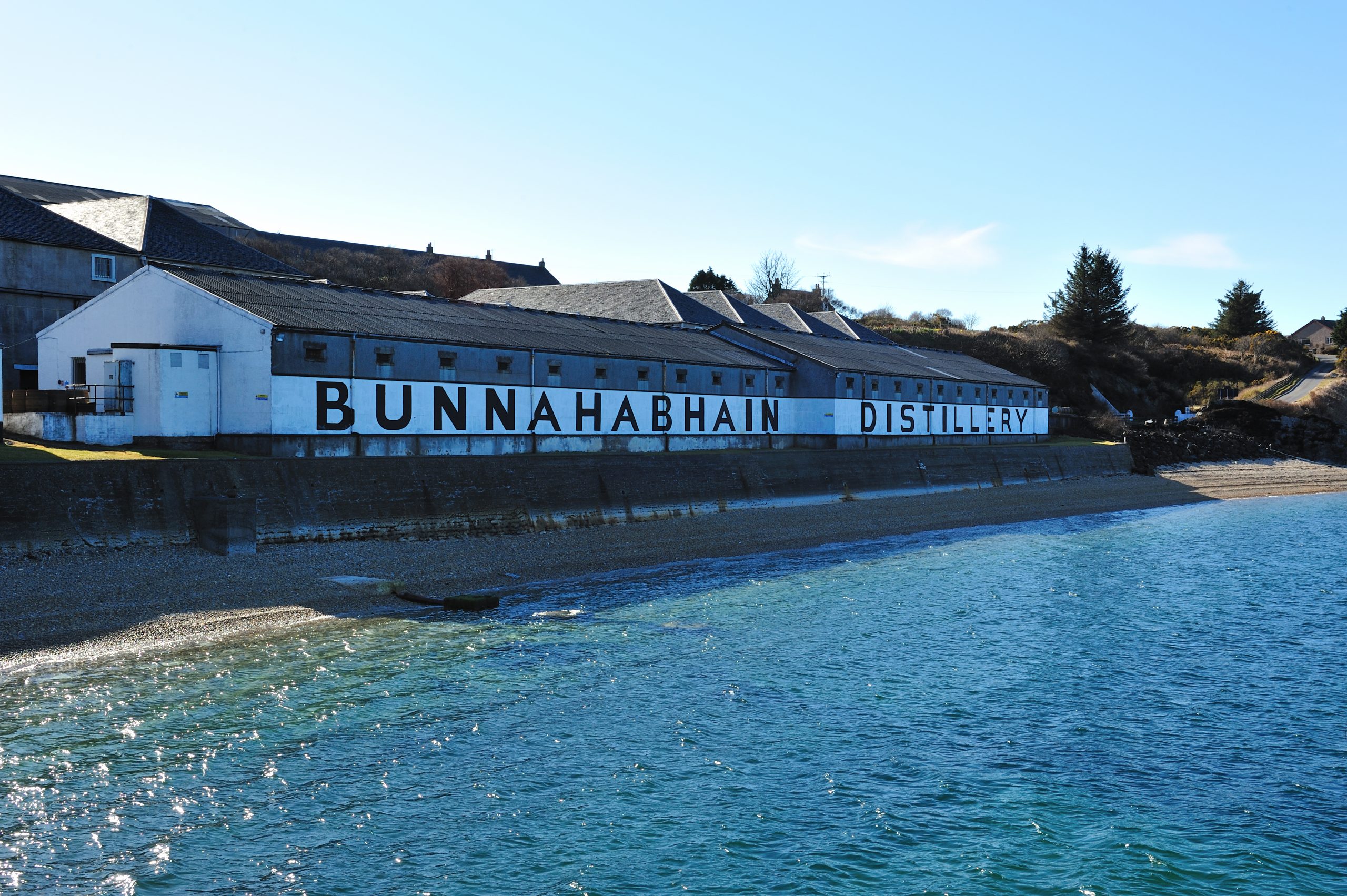 A couple of miles to the north of Ardnahoe, along a narrow winding road is Bunnahabhain, a distinguished distillery celebrating its 140th anniversary this year.  Right by the sea, with its own jetty, Bunnahabhain also enjoys superb views across to Jura as well as to Colonsay and Mull to the north. Its new visitor centre is not as big as Ardnahoe’s but what it does have is 30 different labels, most single casks, in the shop. Billy Sinclair, the visitor centre manager,
revealed it sells about 10,000 20cl bottles per annum to visitors, who relish the huge variety of different types of vessels – around 15 – that the distillery uses for maturation. While 70% of Bunnahabhain’s casks are sherry butts for Manzanilla, Oloroso, Amontillado, Palo Cortado and Pedro Ximenez, also used are red and white wine barriques from Italy, Spain and France as well as Port, Calvados, Madeira and Marsala vessels. And of course, Bourbon.  Many of these can be tried at the daily 10.30am and 2.30pm tastings. Bunnahabhain’s unique selling point is that, while the rest of Islay’s whiskies are largely peated, 80% of its products are unpeated. “Our 12, 18 and 25-year old single malts are all unpeated,” Sinclair said. “Our peated labels have about 40-45 parts per million of peat, which is about the same as Lagavulin and Caol Ila but they have a very different taste because of the nature of the spirit. Our stills are
massive and we only fill them about a third, so you get a huge amount of copper contact, leading to a lighter, softer more delicate spirit without very many of the heavier medicinal phenols.” 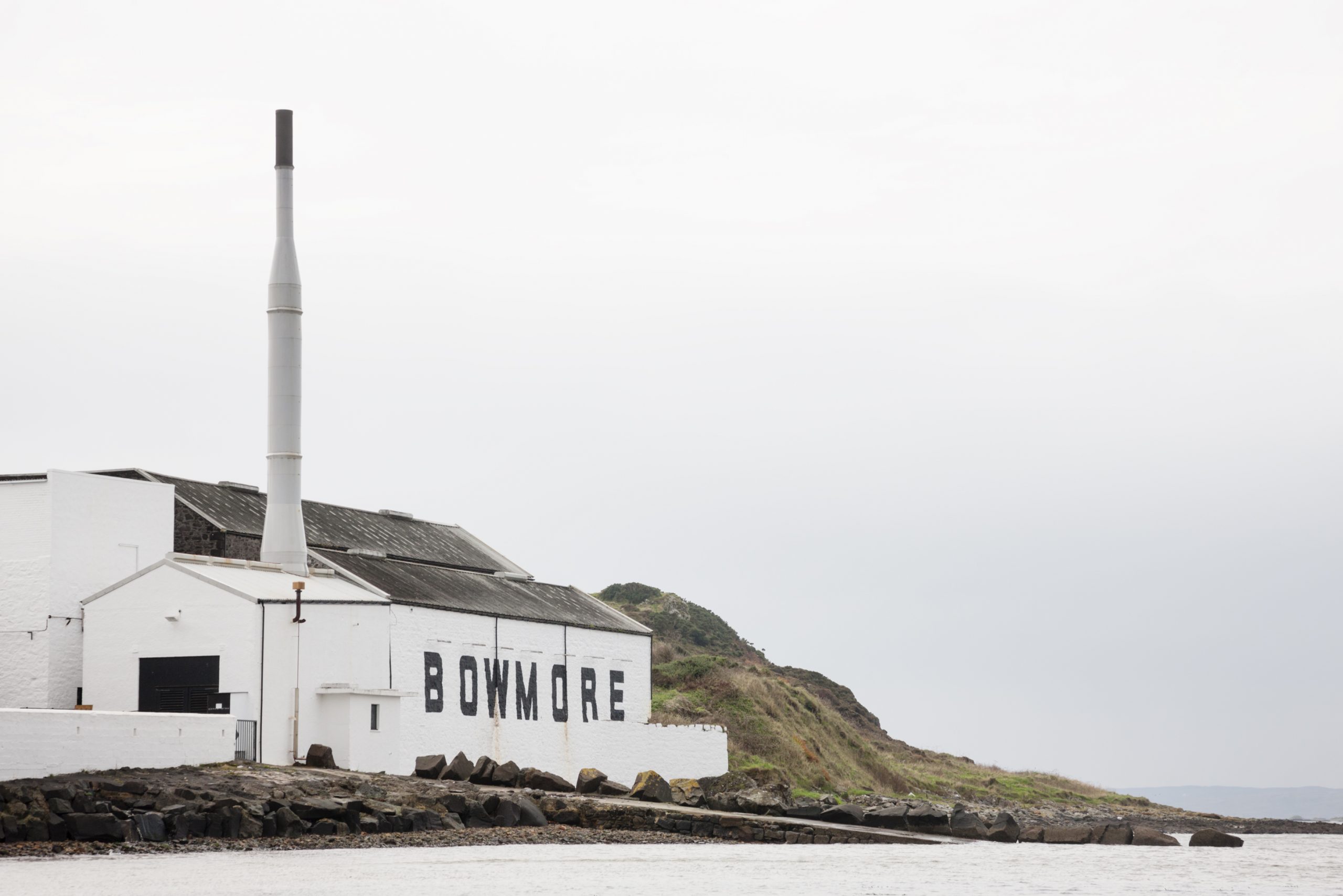 3.Bowmore
From Bunnahabhain, it is a 12-mile drive or cycle to the Bowmore distillery in the centre of the island. En route, you pass the Ballygrant Inn, which has one of the great national collection of Scottish whiskies. Bowmore’s maturation warehouse is the oldest in Scotland, dating back to 1779, and according to distillery manager, David Turner, Bowmore is one of only six Scottish producers who malt some of their own barley. The others are Laphroaig, Kilchoman,
Springbank, Balvenie and Highland Park.  “The tropical fruit flavours that Bowmore are renowned for all start in the malt barns,” Turner said. “We in the centre of Islay are a middlingly peated distillery, with those in the north being lightly peated and the south more heavily so. We use predominantly Bourbon casks for maturation, but 22%
are sherry butts and we’ve also been using wine and port vessels for many years.”  What is an excellent visitor centre at Bowmore attracts around 24,000 visitors a year. 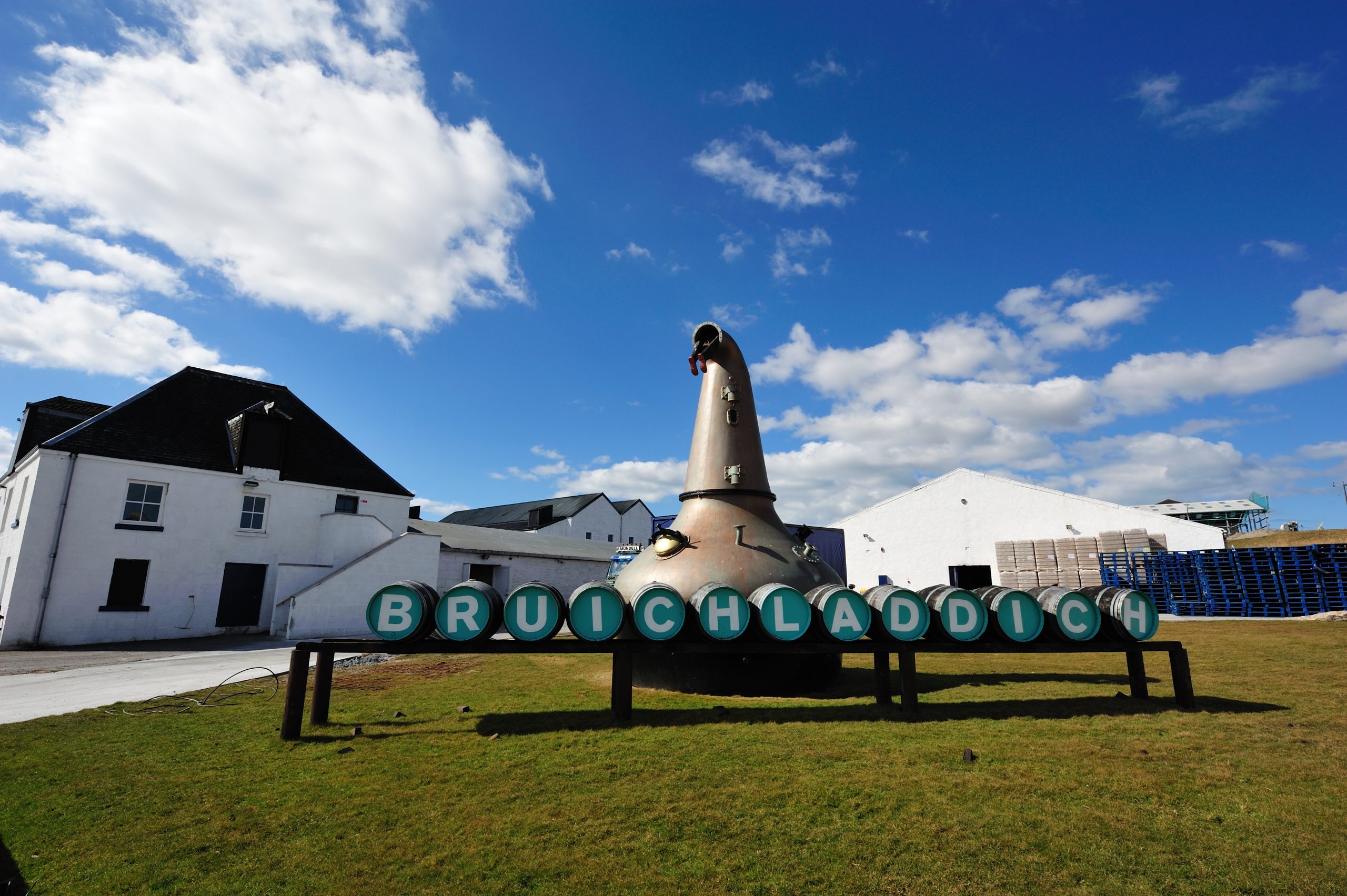 4.Bruichladdich
Just across from Bowmore, although it is an 8-mile drive around the bay, lies Bruichladdich and its extremely impressive visitor centre and shop. Master distiller Adam Hannett took me into the distillery warehouse, a treasure trove of more than 200 different single casks, some of which came from the most famous wineries in Sauternes and
Pomerol as well as Chapoutier in the Rhone. The reddish hue in the whiskies matured in red wine barriques was noticeable. The forward-thinking Hannett delights in experimentation, having started whisky production from rye in 2017. “It’s relatively unusual but more people are doing it, although we’re the only ones on Islay at present,” Hannett revealed. “You get lovely spicey, citrus notes and fine texture and complexity, with the wood really doing its job.
We use a mix of 55% rye and 45% malted barley.” Bruichladdich’s rich array of whiskies includes its Octomore label, the most peated whisky made on Islay with between 80-100 ppm of peat. 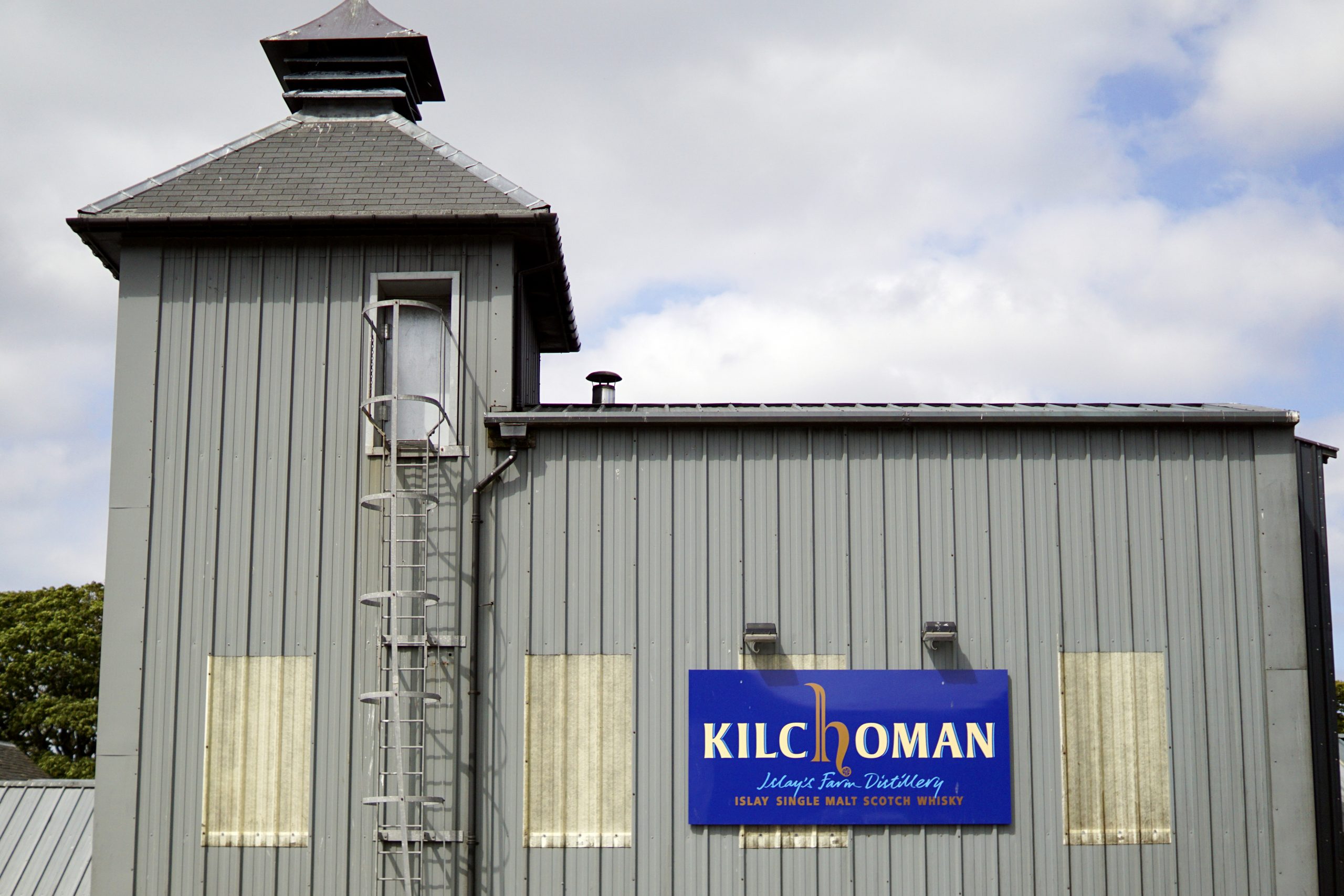 Islay’s most westerly distillery is Kilchoman, on a scenic farm located half a dozen miles inland from Bruichladdich.  The two brands’ joint point of difference is that they alone on Islay use barley grown on the island, with the other distilleries bringing theirs in from the Scottish Borders (although Laphroaig generally source theirs from the
east coast of England, notably Norfolk). Set up by English entrepreneur Anthony Wills in 2005, Kilchoman, which makes single malts only, has been a major success story. Malting their barley on site, they started off producing 50,000 litres of alcohol in 2006 but will have increased that to 630,000 litres by next year. An expansive new visitor centre, which opened in February 2020, has brought in important income streams from the cafe and gift shop. “We’ve chosen to do everything on site, producing Scotland’s only single farm single malt,” Wills said.  “We warehouse almost everything here, and will build four more warehouses over the next eight years. From a staff of seven in 2005-06, we now employ forty people. Our style is softer and fruitier, with not quite the same power as say Laphroaig.” 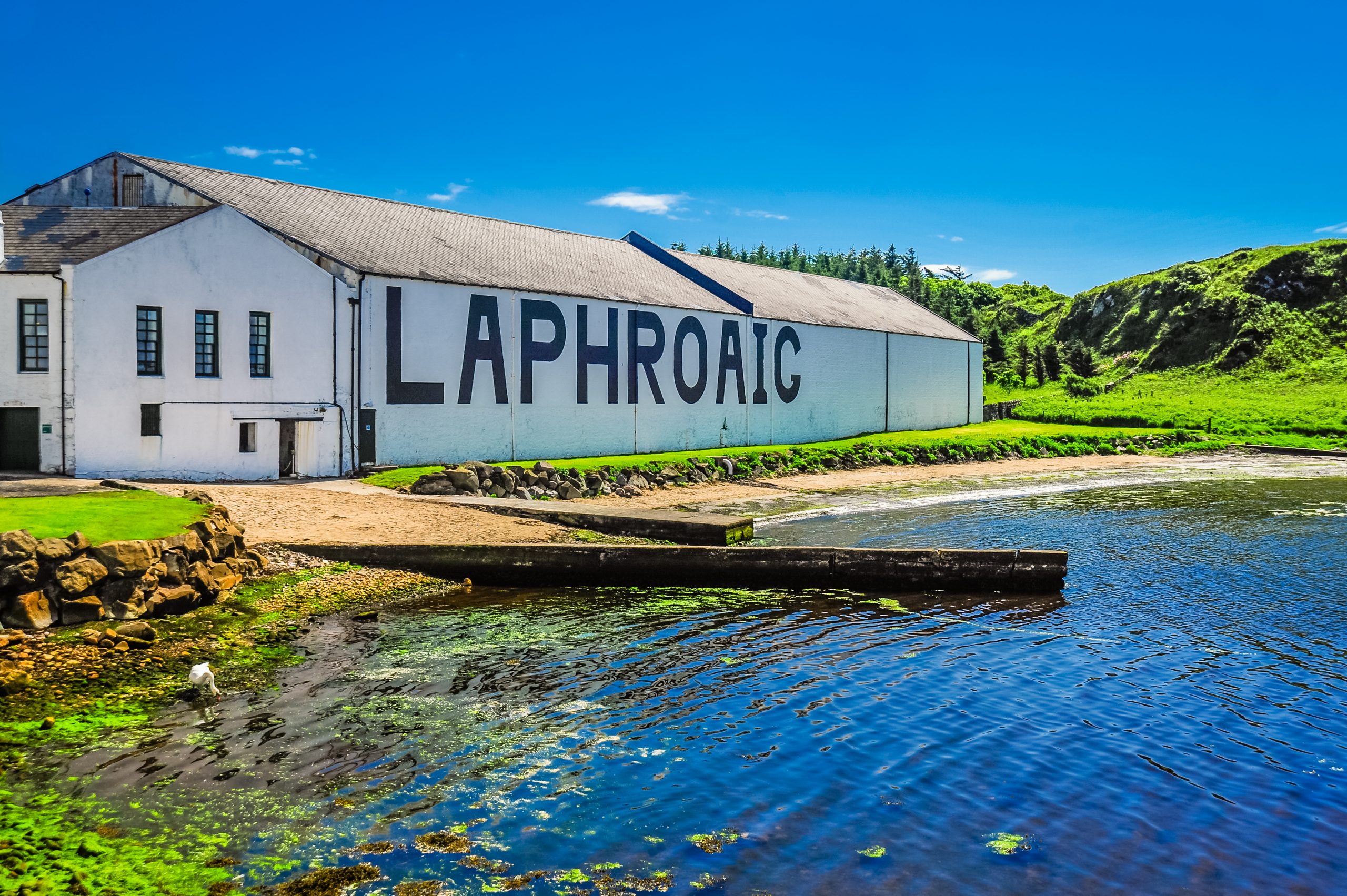 6.Laphroaig
Laphroaig was used to 25,000 visitors per annum before the pandemic but are currently restricting numbers, with a half-hour tasting the experience on offer along with the shop. Prince Charles’ favourite whisky affords the distillery the Royal Warrant, and production is now 3.4 million litres of alcohol per annum. “It was a third of that when
I started 27 years ago,” said John Campbell, Laphroaig’s distillery manager who moved to a Lowlands producer in late November for family reasons. “Unbalanced distillation has been the key for Laphroaig, and I don’t know if any other distillery has it. That’s when Laphroaig lost its really fruity heavy flavour and became more earthy and medicinal. With the small stills, you get more depth of flavour and lovely lighter flavours along with the peat.” All Laphroaig labels
start their maturation in Bourbon casks, with some being double matured in other casks such as Fino, Amontillado, Oloroso and Madeira vessels. 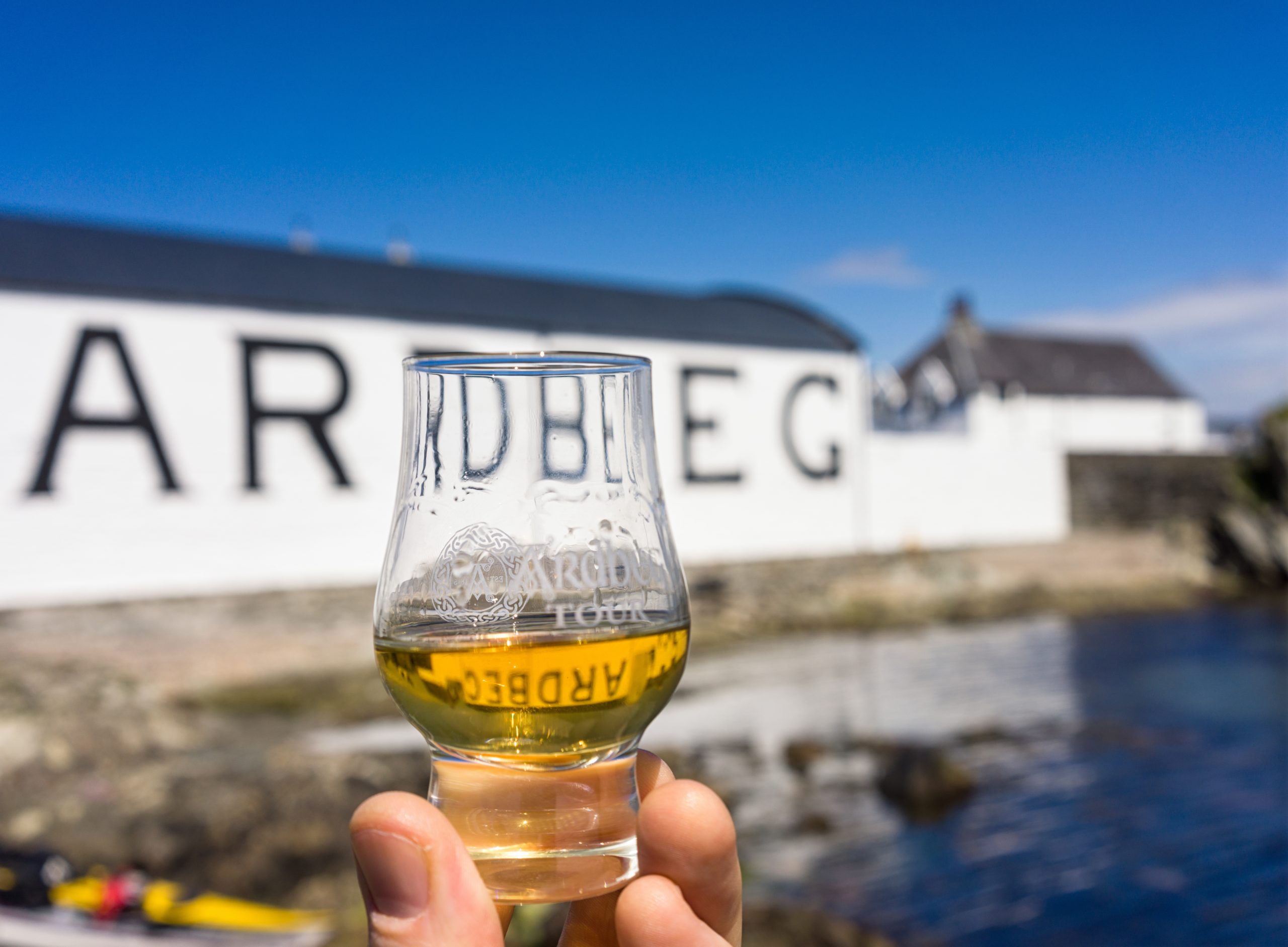 7.Ardbeg
Ardbeg, which is renowned as the peatiest and smokiest of the big three brands on Islay’s south coast, also employs a combination of Bourbon and Oloroso maturation casks for its celebrated Uigeadail Single Malt (world whisky of the year in 2004). Founded in 1815, Ardbeg has hit record production levels this year, mashing 110 tons of
malt per week according to new distillery manager, Colin Gordon. “We’ll produce 1.8 million litres of spirit this year, and our aim is for 2.5m by 2023,” he said. “We have the new stillhouse, and the visitor centre plays a large role. One of the things we’ve looked at since Covid is our restaurant. It’s one of the great things people loved here – it was like organised chaos, so we’re looking at how we can develop that and restructure nicely so we have an outdoor eatery.” 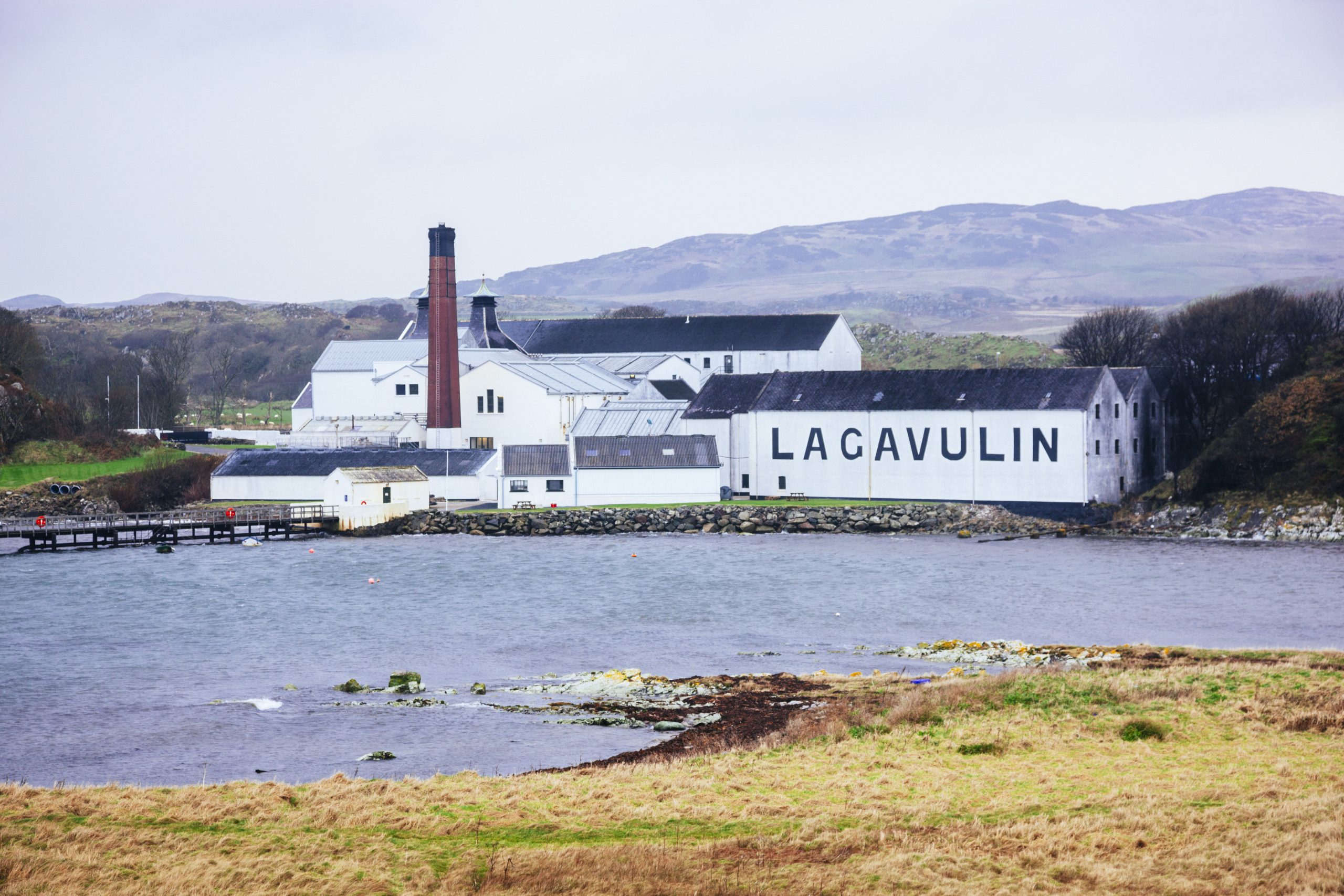 8.Lagavulin
No trip to Islay could be complete without a visit to Lagavulin, which is nestled between Ardbeg and Laphroaig.  Founded a year after Ardbeg, its reputation as an Islay icon has been enhanced by its celebrated 16-year-old single malt, with its intense aromas of peat smoke, sea salt and pepper with dried fruit on the palate. The hour-long
warehouse tastings with the theatrical Iain McArthur, who has worked for Lagavulin since 1970, are a must. The 66-year-old Islay native, whose grandfather worked at Lagavulin and father at Laphroaig, said:
“The warehouse is like my family – you come in here, know all the casks and how they should be. If you see a cask that’s leaking, you’re very annoyed because you’re in every day trying to look after the spirit.” More than anyone, Iain embodies the spirit – both liquid and metaphorical – of Islay, the Queen of the Hebrides.

The 2022 Islay Whisky Festival will take place from 27th May to 4th June.