One of the greats of American football, former quarterback John Elway has become a successful producer with his 7Cellars brand. He tells Lucy Shaw how he fell in love with wine and about his plans to expand the brand’s reach. 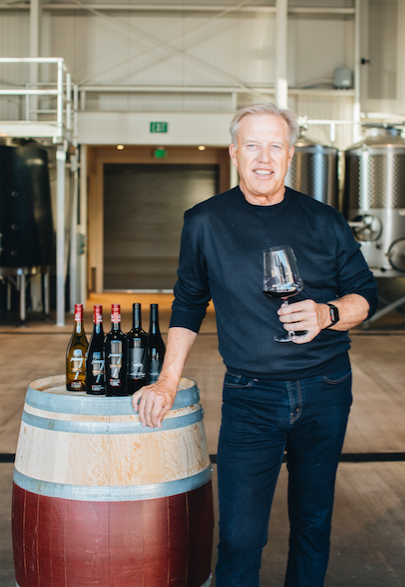 While professional athletes tend to live abstemiously to remain match fit and at the top of their game, once they hang up their jerseys, a growing number are choosing to pursue a second career in wine, no doubt lured by the sun- drenched, laidback lifestyle associated with it, and the chance to pull out a bottle of their own wine from their well- stocked cellars to enjoy with friends.

Celebrities used to branch out into fragrance, but wine is now seen as the ultimate side hustle. Former South African golf pro Ernie Els and England cricketing legend Sir Ian Botham are both enjoying a successful second life in wine, as is former NBA giant Yao Ming of the Houston Rockets, who makes pricey California Cabernet under the Yao Family Wines label.

In the Golden State, Denver Broncos legend John Elway – considered one of the greatest quarterbacks of all time – founded his 7Cellars wine brand in 2015 with long-term business partner Jeff Sperbeck, a contract advisor who has represented over 100 NFL players during his 30-year career as an agent.

Elway and Sperbeck have worked together on various ventures since the 1990s – before 7Cellars launched the pair developed a successful chain of ‘Elway’s’ steakhouses in Denver with restaurateur Tim Schmidt, including a site at the Ritz Carlton boasting a wine list packed with top drops from around the globe. The dream was to create a venue for people to celebrate life’s victories, big and small, over a juicy USDA Prime and a full-bodied red with the heft and muscle to cut through the fat.

It was over a bottle of Château Lafite 1998 – the year Elway won his second Super Bowl – that he and Sperbeck hatched a plan to create their own wine range that could be served at their steakhouses. Though turning their dream into reality took a little longer than they had anticipated. “I’ve always liked the steakhouse vibe, and love a good bone-in ribeye, but creating the wine to pair with it took a while – 7Cellars launched 10 years after we opened our first restaurant,” says Elway, who wanted to be sure of his product rather than rushing to release a wine he wasn’t happy with. 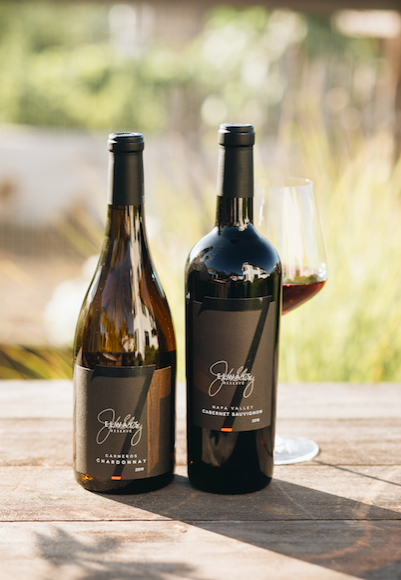 Having toyed with a number of regions, he settled on the Napa Valley due to its revered reputation, the fact that Sperbeck lived in the Bay Area, and partly for nostalgic reasons, as, being a Stanford graduate, he had roots in California. Knowing a wine is

only as good as the people who make it, Elway’s top priority was putting together a talented team. “Both wine and sport require great teams. Wine doesn’t make itself; no more than a bunch of players win a championship.

They require exceptional, driven people working together towards a common goal. Creating a great wine is one piece of the puzzle, but design, sales, management and marketing play equally big parts in the equation. Succeeding in sports and wine both require a little luck at times too,” Elway admits.

While researching wineries in Napa he was introduced to Jake Kloberdanz, CEO of direct-to-consumer winery OneHope, which donates proceeds from bottle sales to local and international charities. “OneHope was a growing wine company whose mission was giving back through their wines.

We all connected immediately and saw the value in partnering,” says Elway. Through OneHope, he met Robert Mondavi Jr. of the Mondavi winemaking dynasty, and knew that he was the man for the job. While deferring to Mondavi initially, Elway had a clear vision of the California Cabernet he wanted to create – it had to be big enough to stand up to one of his steaks, but, loving the wines of the Médoc, he also wanted to craft a Cabernet with elegance that would age gracefully.

“We have continued to evolve our Reserve Cabernet and are very proud of it,” Elway says. Called 7Cellars after his Denver Broncos jersey number, Elway launched his wine range in 2015 with the 2013 vintage of his Reserve Cabernet and a 2014 Reserve Chardonnay. Priced at US$65 (£47) a pop, the Cabernet grapes are mainly sourced from Bennett Lane Vineyard in Calistoga, which is certified as being Green/Fish Friendly Farming by the California Land Stewardship Institute. 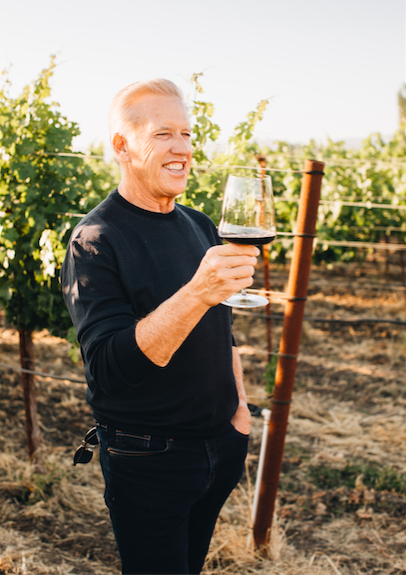 According to Mondavi, the “medium to full-bodied” Cab displays notes of “blackberry, blackcurrant and liquorice, with hints of toffee and savoury spice”, and has a “smooth, well-balanced finish”.

The Reserve Chardonnay, meanwhile, hails from Carneros, and is fermented in 33% new American oak for nine months on its lees. It offers notes of apple, hazelnut, honeysuckle and quince, with hints of brioche and a long, bright finish.

Distribution of the wine started small – Elway launched his debut vintage through his steakhouses and sold a little at sports stadiums in Denver. With the help of Southern Glazer’s’ vast

distribution network, the brand is now on sale at over 1,000 locations in 22 US states, and can also be bought in Canada. The dream is to be found in all 50 states across America, in the hope of taking 7Cellars international. In terms of production, Elway has ambitious expansion plans.

He produces 25,000 bottles a year, and is set to double production next year. “We haven’t picked a quantity that we need to produce. As long as people are buying and we’re growing, we’ll continue to make more,” he says.

His expansion plan has been aided by the launch of The Farm range, a more accessible, affordable line of wines named after the affectionate nickname for Stanford University. Designed for everyday drinking, The Farm collection is comprised of a Paso Robles Cabernet, an Arroyo Seco Chardonnay, and a Monterrey Pinot Noir, all of which are priced at US$30 (£21). The range launched during lockdown and is proving popular with millennials. Elway is interested in adding a second white to The Farm range, though is keeping the grape under wraps, and is also looking into developing a red blend for the Reserve range.

Inspired by OneHope, 7Cellars donates a portion of proceeds from every bottle to Team Rubicon, whose mission is to unite military veterans with a sense of purpose through humanitarian relief. “Team Rubicon is an amazing organisation that was founded in 2010 by a former marine and football player from the University of Wisconsin, Jake Wood. He and some friends wanted to help in the aftermath of the Haiti earthquake, so they went. Today, there are 350,000 former servicemen and women who volunteer their time during natural disasters all over the world,” says Elway, who also has partnerships with a number of other charities.

Having drunk beer during his university days, Elway developed a thirst for wine in his mid-thirties, towards the end of his career with the Denver Broncos, when he started seeking out the likes of Lafite, Sassicaia, Opus One and Yquem. He bowed out of American football in 1998 at the age of 38 after winning his second Super Bowl, going out on a high. “I knew that I couldn’t put my body through an entire season in the hope of getting to

another Super Bowl. We used to get hit a lot more than quarterbacks do nowadays, so my body was tired,” he admits. Having been talent spotted by the New York Yankees as a youngster, Elway has no regrets about choosing football over baseball. “It would have been pretty amazing to roam the outfield in the Yankee Stadium, and hit one out of that famous ballpark, but I think my life turned out as it was supposed to.”

Having survived Covid-19 last year, life is now all the more precious. Luckily for Elway, although having the virus felt akin to a bout of flu that sapped his energy and left him sore, it spared him the loss of smell and taste that many people experience on catching the virus. One positive to have come out of the pandemic was a rise in online sales and a focused push to open new off-trade accounts. “It’s no surprise that people’s social habits changed during the pandemic, and we did a good job of embracing those changes,” he says.

The pandemic has taught him not to dwell on things he has no control over. “In a similar way to sports, you never know what life (or an opponent) is going to throw at you, so there’s no point complaining or worrying about it. You just need to move quickly to overcome the obstacle,” he says.

Working in wine has taught Elway to make the most of what nature throws your way. “When life gives you grapes, crush ’em,” he quips. While he’d love one of his four children to take over the running of 7Cellars one day, a life in wine isn’t part of their game plan just yet. But ever the optimist, Elway isn’t ruling it out: “Never say never.”

John Elway at a glance 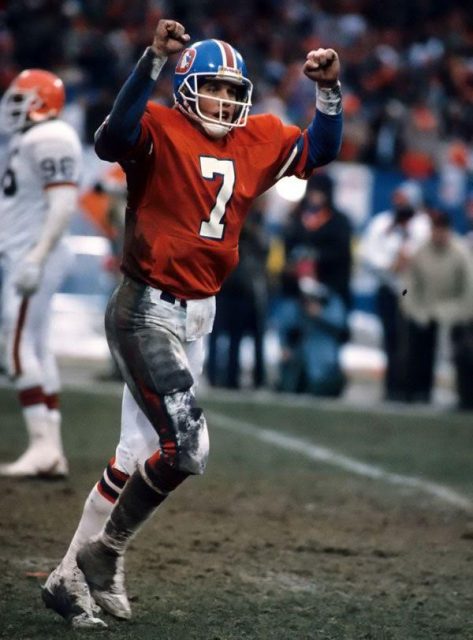