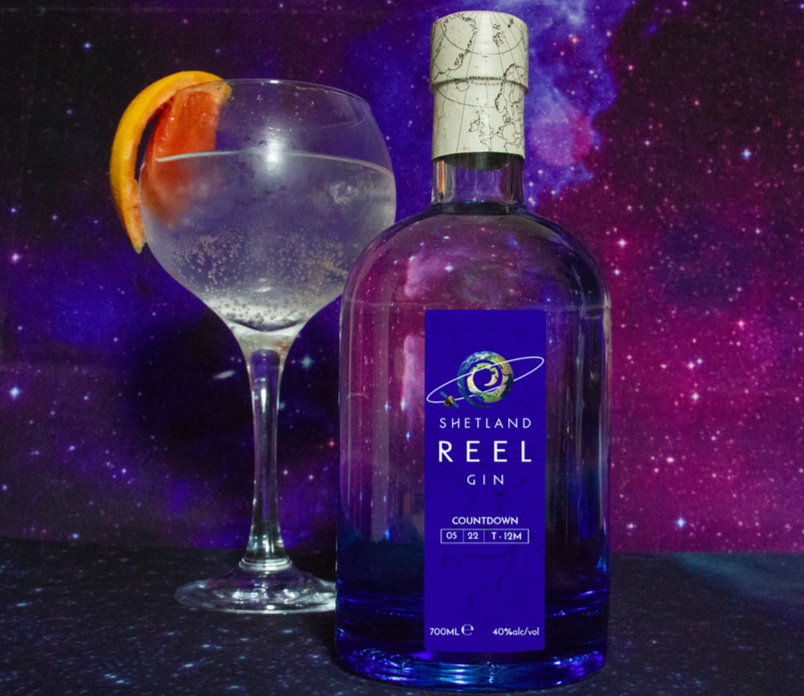 We’ve seen some out-of-this-world product launches in our time, but this one really shoots for the stars.

Shetland Reel distillery has dropped a collaboration with Shetland Space Centre, to mark the official countdown to the UK’s first vertical satellite launch, set to take place on the islands in 2022. Those lucky enough to grab a bottle of Countdown Gin will spy a feature on the label displaying the countdown from the gin’s release date, marking the moment in history.

Both the distillery and the newly formed Shetland Space Centre operate from the island of Unst, Britain’s most northern inhabited island. And with the proposed launch site for the new satellite just a few miles from the distillery, the team says it was only fitting for them to come together on the project.

“It’s a very exciting time for us. Not only is the distillery reopening to the public after a challenging 2020, but we’re also looking forward to welcoming a whole new industry to the islands in the form of the Shetland Space Centre,” said director of Shetland Reel, Debbie Strang, who believes having the space centre nearby is a real boon for the islands.

“Having Europe’s premiere spaceport facilitating small satellite launch facilities right here on our doorstep is a massive coup for Shetland, hopefully bringing in lots of jobs and boosting the local economy.”

Plans for the Space Centre were submitted to Shetland Islands Council in January 2021 to enable up to 30 launches per year.

Strang describes the new Countdown Gin as being “packed with more of everything that makes our Original Gin so great”, including locally harvested botanical apple mint, and even more juniper, spice and citrus than its predecessor.

Priced at £30 for a 70cl bottle, you can pick up a bottle of Countdown Gin from the Shetland Reel website, as well as shops and supermarkets across Shetland, and the Unst distillery itself.

Scott Hammond, Shetland Space Centre operations director, said: “The establishment of the Shetland Space Centre in Unst will create many opportunities for businesses throughout Shetland, from local engineering companies becoming involved or a local B&B owner welcoming interested visitors. We are delighted about the release of Countdown Gin and I for one will definitely be marking the occasion with a celebratory G&T.”

One small step for man….