Ciacci Piccolomini d’Aragona has released a limited-edition label for its Brunello to mark the return of the Giro d’Italia cycling race to Montalcino this year.

The ‘Limited Edition Brunello Wine Stage’ label will see a few bottles of the 2016 vintage of the producer’s Brunello di Montalcino dressed in pink in honour of this historic date as racers ride the undulating gravel Strada Bianche’esque roads for the first time in eleven years on 19 May 2021.

This special label has been authorised by RCS – Gazzetta dello Sport to grace a very limited number of 75cl bottles, which are exclusively available to purchase in Italy.

It is only the second such limited edition of its kind to be created by the winery, with a similar project created exclusively in recognition of the Giro d’Italia when it passed through Montalcino back in 2010. 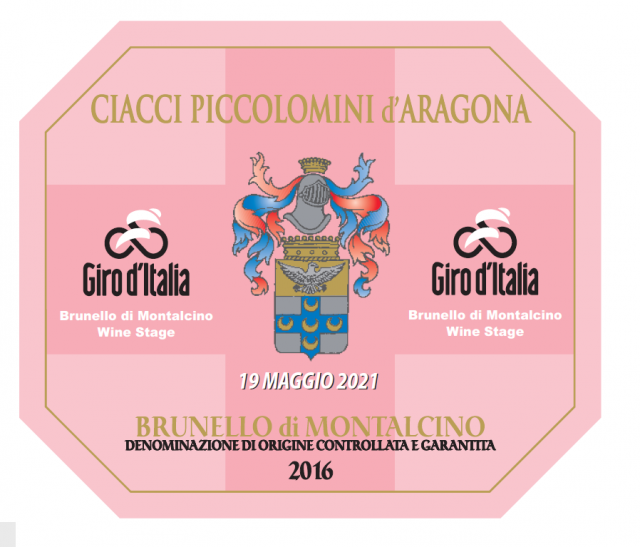 There has always been a strong link between Ciacci and cycling with the Brunello producer’s owner and winemaker Paolo Bianchini an ex-pro cyclist himself.

Bianchini said: “We are delighted that the world famous Giro d’Italia will once again be passing through the region and it is my great pleasure to unveil our limited edition label for our 2016 Brunello di Montalcino to commemorate the occasion.

He added, “It is a historic moment for wine and cycling lovers alike and we are incredibly proud that we are able to play our part in supporting this great race.”

The 2016 Ciacci Brunello di Montalcino has received 97 points from Kieran O’Keefe for Wine Enthusiast, 95+ points from Monica Larner on RobertParker.com, and 95 from James Suckling on JamesSuckling.com.