In the race to eliminate packaging waste, Pernod Ricard has launched a prototype of its Absolut paper bottle, the first paper bottle for spirits in the UK, which will be rolled out across the country. 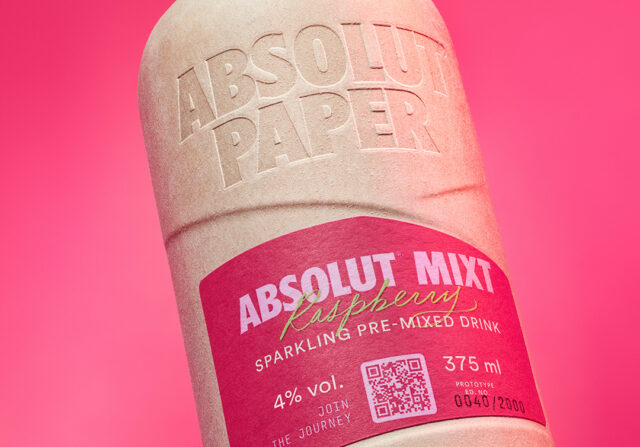 As reported by Drinks Retailing News, an initial batch of 2,000 paper bottles containing the vodka will be released across the UK and Sweden – the first markets to receive the prototype.

Absolut is a member of the Paboco community, which also includes L’Oréal, Coca-Cola in Europe and Carlsberg.

Paboco, also known as the Paper Bottle Company, grew from a start-up run by post-doctoral students from the Danish Technical University, near Copenhagen.

The paper bottle from Absolut is made from 57% paper and 43% recycled plastic, reports Drinks Retailing. The plastic forms a layer within the bottle and is fully recyclable.

In the UK, although glass is fully recyclable, much still ends up in landfill. In 2019, the Waste and Resource Action Programme found that just one in five councils in England provides a complete recycling service, and the UK government did not meet the targets set for 2020.

The Absolut Paper Bottle launch means Paboco is one step ahead of sustainability competitors in the spirits industry, such as Frugalpac, which is based in Ipswich, Suffolk, and has the release of their first paper bottle of Silent Pool gin set for early 2021.

Frugalpac has a wine paper bottle already on the market; an unoaked Sangiovese from Cantina Goccia.