iDealwine update: When in Rhône

The Gonon brothers farm and ferment in the traditional method, and their meticulousness has led to them becoming a leading light of Saint-Joseph. 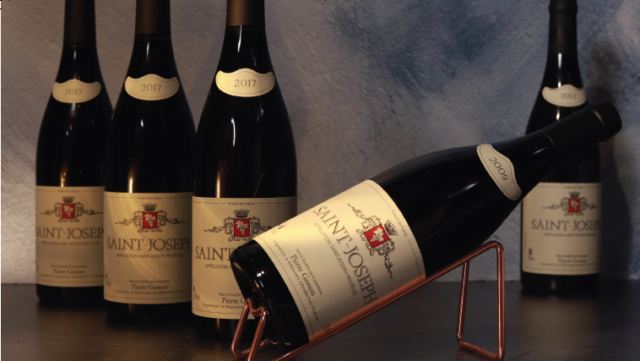 In the northern Rhône, the Saint-Joseph appellation has lived in the shadows of the illustrious Hermitage hill across the river. Yet the Western bank of the Rhône is home to many increasingly successful and sought-after crus; Saint-Joseph is one such appellation, along with neighbours Cornas and Condrieu. Pierre and Jean Gonon have contributed hugely to this renaissance of sorts. Their Saint-Joseph releases are exemplars of fine winemaking in the northern Rhône.

At the turn of the 20th century, Pierre Gonon farmed a few parcels of vines while living from polyculture. His son, Émile, on the other hand, pursued other interests leaving the domaine’s vines to decline. Only one parcel of old vines thus remained when his descendent, Pierre Gonon, decided to restore the vineyard in the 1950s.

From the age of 15, he began by replanting vines, then went on to vinify and sell his wines to the local négociant. In 1964, Pierre and his wife bought a parcel of land on which to making a white wine. At the time, white Saint-Joseph was not particularly prized by local merchants, but the winemaker produced his own cuvée, making it the domaine’s first. In 1989, Pierre handed over direction of the property to his sons, Pierre and Jean. The likeable, talented brothers worked hard to put the domaine on the world wine map and continue to produce show-stopping Saint-Joseph with a growing international aura.

Saint-Joseph earned AOC status in 1956; at the time, very little land was under vine, centring around the town of Saint-Joseph and neighbouring villages Mauves, Tournon and Saint Jean de Muzols. In 1971, the appellation expanded, bringing in an era of poor-quality wines. The Gonon family, however, bucked this trend, using only the finest grapes grown with utmost care. The domaine spans 10 hectares of certified organic land – a choice that is all the more back-breaking, given how steep the vineyards are. The work on these slopes is done with the help of winches and hoists, indispensable on such terrain.

Spread over the best communes in the appellation, Tournon, Mauves and St Jean de Muzois, the finest plot was bought from Raymond Trollat in 2005. The vineyards’ eastern exposure gives the grapes fewer hours of sunshine, conferring on them a freshness unusual in the region. The domaine eschews herbicides and pesticides, using only natural composts on its soils, which are made up of decomposed granite and calcareous limestone. Vines are replaced with cuttings from the strongest vines, thus perpetuating healthy rootstock and a continuity of style. The yields are kept low by pruning, between 30 hectolitres per hectare and 38hl/ha; grapes are harvested by hand and are strictly sorted.

In the chai, the Gonon brothers favour similarly uncompromising methods. Solely indigenous yeasts are used to start fermentation, and the wines are fermented traditionally in open oak vats. The estate produces two white cuvées and two reds. The white Saint-Joseph Blanc Les Oliviers, a blend of Marsanne and Roussanne, is produced from the lieu-dit Les Oliviers, terraces perched above the town of Tournon. This site, which lies across the river from Tain L’Hermitage, is reputed to be the finest for producing white Saint Joseph. The second white cuvée is a Chasselas released as a Vin de France.

For both, whole clusters are pressed gently with a pneumatic press, the juice allowed to settle before being racked into fermentation casks. The wines are then aged in barriques and demi-muids on fine lees for 11 months, undergoing frequent batonnage. These incredibly fragrant  whites have impressive ageing ability, easily surpassing 10 years.

> iDealwine is an international finewine e-merchant with offices in Paris, Hong Kong and London. Specialising in online auctions and fixed-price sales, iDealwine was launched in France in 2000, and is now the online auction leader in Europe, supplying to 50 countries in Europe, Asia and the US.
> Wine is sourced from private European cellars and directly from the wineries, with a large range that includes rare bottles and vintages.
> iDealwine provides wine-market data and analysis, with more than 60,000 price estimates based on more than three million auction prices.
> Contact: Arthur de Lencquesaing – arthur@idealwine.com

RARE RED
The reds include a Saint-Joseph rouge, for which grapes are partially destemmed, vinified in large open vats with pumpovers or punch-downs twice a day for two to three weeks, then they mature for 14 to 16 months in foudres and demi-muids. Les Iles Feray, on the other hand, is a Vin de Pays de l’Ardèche aged for 10 months in old demi-muids.

The portfolio is completed by a rare Saint-Joseph Vieilles Vignes. These are top-drawer Saint-Josephs – the finest in the appellation – that showcase the purity of the northern Rhône. Redolent with the typical Syrah notes of dark fruit, violet and pepper, brought together with a hint of leather and black olive, there is a freshness in all of Gonon’s releases.

Very little of the wine is available to buy from the property, and all cuvées are increasingly coveted by enthusiasts. Demand for Gonon has recently rocketed – 2017 saw the start of an upward trajectory in prices, which has intensified over the past 12 months. The US market is particularly receptive to Gonon.

An auction record for Gonon’s releases was set in July 2020, when a 2010 Saint-Joseph Vieilles Vignes went under the hammer for €688 (£629); the 2007 made just under €400. Only one barrel of this cuvée is produced – on the rare occasion that it is produced – from hundred-year-old vines in the Aubert lieu-dit in the Saint Jean de Muzols commune. Raymond Trollat sold this parcel to the Gonon brothers when he retired, and his last vintages from the early 2000s are seeing price hikes at auction, much like Gonon’s releases.

The Gonon brothers are another example of producers that, having earned an international reputation for their resolutely traditional winemaking,
become coveted by a new kind of wine drinker and collector.