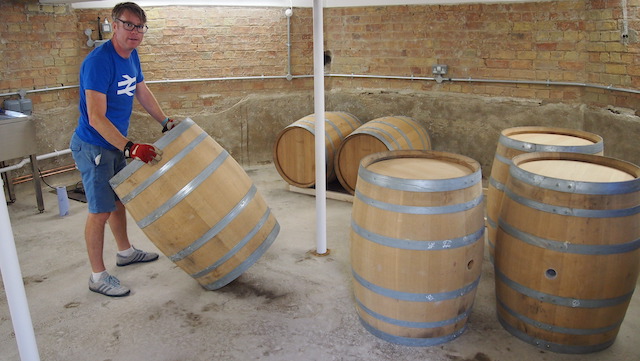 Called Gutter & Stars Wines, the little winery is housed in the basement of a Grade II listed mill less than a mile from the centre of Cambridge.

Built in the late 1840s, for over 100 years it prepared flour for the city’s bakeries but it closed over 60 years ago until Wilson (who lives just 10 minutes away) picked it as the base for his new project.

Wilson said he was, “excited to be bringing a production facility back to Chesterton Mill for the first time in more than 60 years,” – albeit rather different from its original function.

With an oenology degree from Plumpton College and practical winemaking experiences in California, Germany and the UK, Wilson said that he’d been keen to start his own winemaking venture “for some time”.

But, he added, I never thought that it would be in the basement of a historic windmill in Cambridge.”

He will be sourcing fruit from Missing Gate Vineyard in the neighbouring county of Essex, with the first grapes expected to come through the doors later this month and then continuing into October.

The wines will be very small batch productions, with about 2,000 bottles total produced in the first year and with that number increasing over the following years.

Wilson told the drinks business he was hoping to produce “three to four” wines in total, all still, using Chardonnay, Pinot Noir and Bacchus. He said to “expect classic styles with a modern twist”.

As he said in an original statement: “Working in the wine trade as a journalist for a number of years I have visited countless wineries around the world, getting to know winemakers, techniques and beliefs along the way… I have a long list of dos and don’ts.

“I hope to tap into this experience here at Gutter & Stars, but I also want to make my own mark and produce wines with a nod to the very unique surroundings in which they are being made.”