11 of the world’s best-selling vodka brands

With hard seltzer edging in on its turf, vodka producers have had to work hard innovate in the face of tough competition. Nevertheless, many of the world’s biggest brands made significant gains in 2019, as this round up shows. 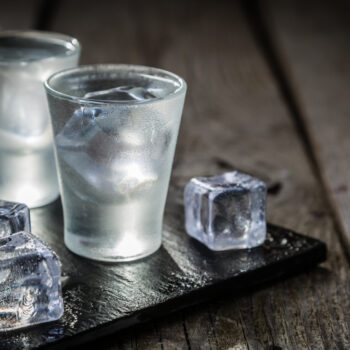 While the flavoured vodka trend continues, a focus on natural ingredients and authenticity is most keenly shaping the vodka category right now.

The influence of gin can be seen in the vodka category’s increasing use of botanicals, while the hard seltzer boom has seen producers respond with more lower ABV vodka-based RTDs.

While smoothness and neutrality remains the watchwords in vodka, provenance of ingredients and authenticity has become paramount, as producers attempt to build a greater sense of terroir and craftsmanship into their product.

NB: All figures are in millions of nine-litre cases sold globally, and have been obtained directly from brand owners unless otherwise stated.

In its 2018 financial results Campari reported a decline in Skyy vodka volumes due to “continued strong competitive pressure and reduced innovations in infusions”. It was the only global priority brand to have suffered a decline, with weakness in the US market blamed.

That decline continued in 2019, dropping by 2.7%. Still, the brand remains a major player in the global vodka market with 3.6 million nine-litre cases sold in 2019, along with the launch of a new limited edition coffee-infused expression, Skyy Infusions Cold Brew Coffee. Available in the US, Skyy Infusions Cold Brew Coffee is infused with Arabica coffee beans, giving the vodka a “mild, sweet and less bitter coffee taste”. The new vodka aimed to tap into the trend for cold brew coffee, particularly among a “brunch-focused generation” in the US.

While Poland’s Soplica is well-known for its flavoured liqueurs range, it is also a behemoth on the world’s vodka stage, with its Soplica Vodka label achieving a 7.7% increase in sales last year, taking it to 4.2m nine-litre cases globally.

Founded in 1888, making it one of Poland’s oldest vodka brands, Soplica is owned by Central and Eastern European spirits producer Roust. Its line of vodkas include Soplica Noble Vodka, Old Polish Soplica and Soplica Nalewka Spirit, alongside a range of flavoured variants. In 2016, it relaunched its Soplica Staropolska line, at the same time introducing a lemon and honey-flavoured vodka to the range. The expression is flavoured with lemon extract, lending a “full and rich” character, and is supplemented with “flowery” Polish honey, said to make its “light sourness gentler”.

Ukraine’s Nemiroff vodka has been building its sales steadily over the past five years, joining the ranks of the world’s biggest vodka brands. But it suffered a decline in volume sales in 2019, which dropped by some 400,000 cases. Ukraine remains its biggest market, where around half of all vodka exports are said to be Nemiroff.

Alcohol consumption in Russia has fallen by 43% since 2003, with sales of vodka in particular taking a hit. According to the World Health Organisation (WHO), with Russians now consuming an average of just under 12 litres of pure alcohol each year (which is still higher than the global average, which in 2016 stood at 6.4 litres). 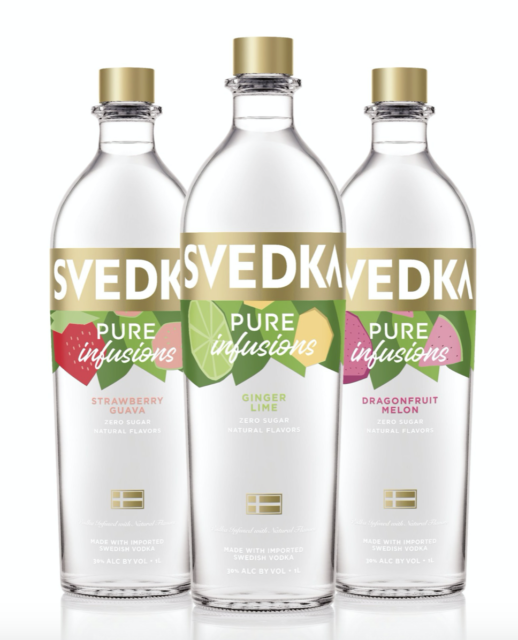 This year it released a released a zero-sugar flavoured range, called Pure Infusions. The new range comes in three flavours: Strawberry Guava, Ginger Lime and Dragonfruit Melon, each at 30% ABV. Each variant is “naturally flavoured”, free from sugar, carbohydrates and fat and contain 70 calories per 1.5 ounce serving (approximately 45ml).

In April, the company confirmed in its 2020 financial results that it had further innovations in the pipeline, which would include line extensions for Svedka vodka, along with a new marketing campaign for the brand. 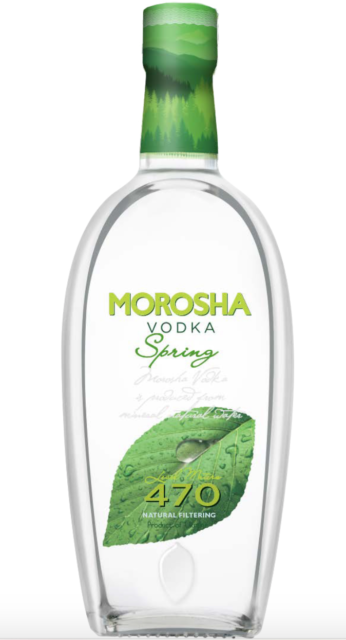 Ukraine’s Morosha Vodka is owned by Global Spirits and made a stunning entry into the top 10 this year having achieved a 72.2% spike in global sales volumes.

It’s marketed as an “eco-friendly vodka made with natural spring water from the mountain source of the Carpathian Biosphere Reserve” in Ukraine, and this year made its foray into the UK market having rebranded and released five new lines. It also opened new third‐party bottling productions in Belarus, Azerbaijan, Kazakhstan and Texas, further strengthening its footprint outside of its Eastern European heartland.

Another Ukrainian vodka, last year Hlibny Dar grew its global sales volumes by 6.6% to 8m nine-litre cases. It’s owned by the Bayadera Group, the largest spirits company in Ukraine, with Hlibny Dar (Also known as Khlibniy Dar), first launched in 2003. In 2014 the group began producing its own brandy, and in 2015 it entered the sparkling wine market, alongside a host of own-label spirits brands, including Marengo vermouth and its Koblevo wine label.

Last year the Hlibny Dar vodka brand underwent a redesign, smartening up its labels to emphasise its “authenticity, tradition, and quality”, with the bottle redesigned to be taller and slimmer with embossed lettering.

Polish vodka Żubrówka achieved an impressive 12.8% increase in sales in 2019, taking its total of nine-litre cases sold globally to 9.7 million.

In 2019, the brand launched its Żubrówka Biała vodka in the UK. The vodka is the brand’s fastest growing variant of its flagship Bison Grass vodka, and is inspired by the snowy Białowieża Forest and named ‘white’ in Polish. First launched in 2010 it has become Poland’s best-selling vodka brand, enjoying a 20% share of its domestic market in 2016, with sales are equivalent to the whole of the UK vodka market.

The brand’s original rye-based Żubrówka Bison Grass vodka uses extracts of Bison grass harvested from the ancient Białowieża Forest in Poland (home to endangered Bison), and is produced exclusively out of a distillery in Bialystok, Poland. Along with its Biala vodka, the brand also has two further variants in its portfolio, including a vodka flavoured with mint and a hint of juniper, launched in 2017, and the super premium Żubrówka Czarna vodka, which launched in 2016. 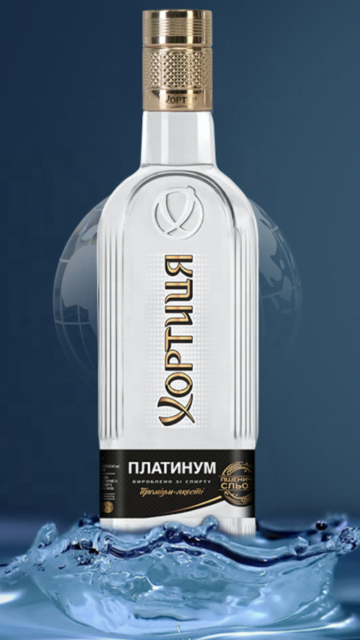 In the US the brand is known as Khor, with its owners Global Spirits continuing to make strides in this market having opened an office there in 2015, appointing a central distributor and expanding into new states including Kentucky, California and more recently New England. However like all vodka brands operating in the US, it faces strong headwinds and the challenges of an already competitive and crowded market.

The world’s second biggest vodka brand remains Absolut, despite reporting a 7.6% decline in global sales volumes in 2019. Owned by French spirits company Pernod Ricard, Absolut is a 100% wheat vodka from Sweden, and is one of the biggest vodka brands in the world. It is sold in around 126 countries, with Northern America a particularly key market, where it has been imported since 1979. The brand itself was established in 1879 by Lars Olsson Smith and is produced in Åhus, Sweden.

This year the brand released a limited edition Absolut Recycled bottle design in global travel retail to highlight the importance of sustainability, in line with the brand’s ethos to “strive for a more circular world in which resources are reused again and again to benefit local economies, communities and ecosystems”. Absolut pledged that US$1 for every bottle sold in airports during November and December 2019 would go towards the Guanaré Forest Plantations Project, Uruguay, which works to offset carbon emissions. The initiative built on its partnership with The Paper Bottle Company (Paboco) to create a fully bio-based and recyclable paper bottle.

Miles ahead of its nearest competitor, Diageo’s Smirnoff remains the world’s biggest vodka brand shifting 25.6m nine-litre cases in 2019, a decline of 1.1%, but barely a dent to its presence on the global stage.

Last year the brand celebrated its 150th year anniversary, having started life at a vodka distillery founded in Moscow by Pyotr Arsenievich Smirnov. It is now distributed in 130 countries and is one of the world’s biggest alcoholic drinks brands, however its dominance in the US was challenged this year.

Figures from the IWSR US Beverage Alcohol Review (US BAR) database showed that sales of Tito’s Handmade Vodka grew by more than 20% in 2019, placing it in the top spot in the US, followed by Brown-Forman’s Jack Daniel’s Tennessee whiskey. It was the first time in a decade that Smirnoff wasn’t the top-selling distilled spirit in America.

Despite facing competition in the US, Smirnoff still dominates the global vodka stage by some margin – 14.5m cases to be exact, more than Absolut’s entire global sales in 2019. This year the brand launched its Smirnoff Seltzer in the UK – a mix of Smirnoff No.21 Premium Vodka, sparkling water and natural fruit flavours. The range initially launched with two flavours: Smirnoff Seltzer Raspberry and Rhubarb, and Smirnoff Seltzer Orange and Grapefruit.