Worst-performing Bordeaux labels in 2020 – so far

It was recently noted by Liv-ex that the Bordeaux 500 index is showing a “semblance of recovery” but what are the worst performing claret labels and vintages so far this year? 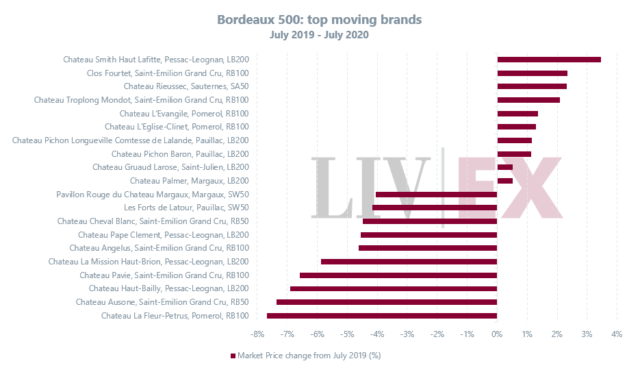 As was noted earlier this month, the Bordeaux 500 index, which tracks the performance of the last 10 vintages of the leading 50 Bordeaux labels on the Liv-ex marketplace, is down so far this year but has shown signs of recovery since hitting its lowest point in March.

Liv-ex noted on its blog that of the 50 estates represented in the index, only 13 have risen since July 2019 and only four over 2% in that time.

A good number of these are Right Bank estates but it is Smith Haut-Lafitte which has shown the best overall performance of the 50 so far in 2020, rising over 3%.

The best performing vintage so far this year, meanwhile, remains the ever stalwart 2008, although only by a very marginal 0.33%.

The worst-performing vintage so far by contrast is the much-hyped 2009, which as declined the most on average by 4.7% over the past year.

A few wines from that vintage have performed positively, however, notably the wines of Palmer, Pichon Baron and Calon Ségur.

When it comes to the worst-performing estates so far in 2020, the worst results range from declines of 4% to over 7%.

Of the 10 worst-performing, two are from the second wine index, three from the Left Bank 200 index and the other five from either the Right Bank 50 or Right Bank 100.

La Fleur-Petrus has struggled the most, declining well over 7%, closely followed by Château Ausone, while Haut Bailly at just under a 7% decline has been the worst Left Bank performer.