University of Aberdeen archaeologists have uncovered what is believed to be the largest Pictish site in Scotland, and have found evidence settlers in the surrounding area had a thirst for Mediterranean wine. 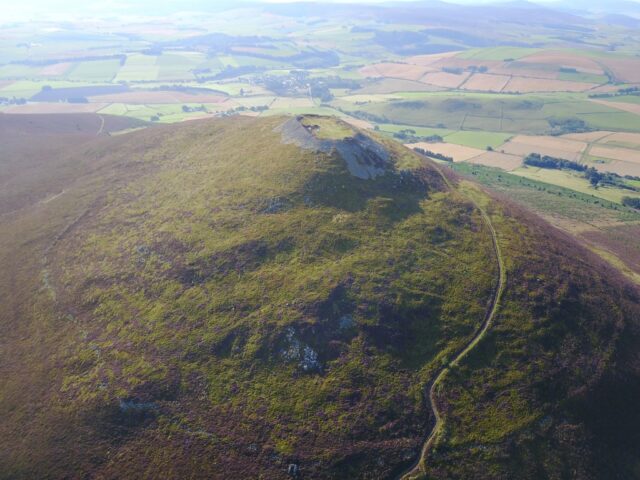 The team made the discovery when excavating part of the Tap O’ Noth hillfort, near the village of Rhynie.

The area is well-known for its Pictish artefacts after the discovery of the so-called Rhynie Man, a six-foot high carved stone of a figure carrying an axe, which was found by a farmer in 1978.

However, researchers had previously concentrated their efforts on the lower valley.

Over the last two years, they turned their attention to the lower part of the Tap O’ Noth hillfort, an area of around 17 acres enclosed by a rampart that encircles the lower slopes of the hill.

After conducting radiocarbon dating, they found that, contrary to what was previously thought, the fort was constructed in the fifth to sixth centuries AD, while the hill settlement may date back as far back as the third century AD.

Using drone and laser technology, the team found evidence of over 800 huts, meaning that as many as 4,000 people could have lived in the area.

This means that the settlement is not only the largest Picktish settlement ever uncovered, but it is larger than any other site dating from the early medieval period in Britain. Historians had previously believed that it was not until the 12th century in Scotland that settlements were of this size. While just a few hundred people now live in the village of Rhynie, the area was once home to one of the largest known post-Roman settlements in Europe.

Moreover, discoveries in the surrounding area indicates the settlement had international connections. Archaeologists have unearthed evidence of the consumption of Mediterranean wine, as well as use of glass vessels made in western France and intensive metal work production. This, the University of Aberdeen team states, suggests this was a “high-status site, possibly even with royal connections”.

Professor Gordon Noble, who led the research, described the recent discoveries as “truly mind blowing” and the “most surprising” of his career.

“It…demonstrates just how much we still have to learn about settlement around the time that the early kingdoms of Pictland were being consolidated,” he said.

“The Tap O’ Noth discovery shakes the narrative of this whole time period. This makes it bigger than anything we know from early medieval Britain – the previous biggest known fort in early medieval Scotland is Burghead at around five and a half hectares and in England famous post-Roman sites such as Cadbury Castle is seven hectares and Tintagel around five hectares.”

Bruce Mann, archaeologist for Aberdeenshire Council, added: “To say these results are completely unexpected is an understatement. However, they could be key to understanding changing settlement patterns at the time. In the early centuries AD there were widespread small communities scattered across the landscape.

“These then largely disappear during the time of the Roman campaigns and we’ve struggled to understand what happened. Perhaps now we have evidence of people coming together in large concentrations at a handful of places, a reaction to the threat of external invasions.”