A bottle of 60 year-old 1926 Macallan with a label by Valerio Adami was sold this week for a hammer price US$1 million – the first time the price has been achieved in an online sale. 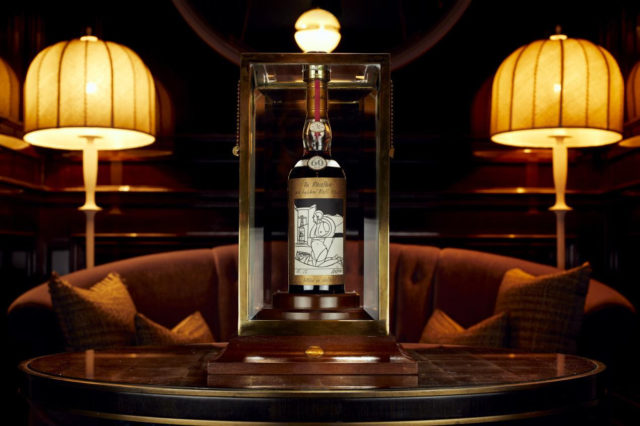 The bottle was part of a hugely successful online sale hosted by Whisky Auctioneer this week which realised a total of $4.2m (£3.2m).

Bottles of the 1926 Macallan from Cask #263 have now achieved sales of over $1m in both live and online sales and across all iterations of its bottling (those labelled as part of the Fine & Rare series, the Peter Blake and Valerio Adami labelled bottles and the single bottle hand painted by Michael Dillon).

Bids for the bottle came in from 11 countries including the UK, Singapore and Australia. The winning bidder was based in Europe.

There were also bottles of old and rare Ardbeg and lost distilleries which made high prices after fierce bidding.

The entire collection being sold was the property of just one man, the late Richard Gooding from Colorado who travelled extensively in Scotland and built up his impressive horde over many decades.

The founder of Whisky Auctioneer, Iain McClune, said: “All in all the first part of the collection sale achieved $4,277,000 (£3,290,000) of sales over 1,932 bottles. “Featuring show stopping Macallan bottlings from the Lalique range, astonishingly rare and iconic bottlings including a lost distillery Old Orkney from Stromness Distillery which set a record selling at $33,891 (£26,000) with bidders battling it out in the final moments as well as an Ardbeg 1974 Double Barrel reaching a hammer price of $27,705 (£21,250).  For me it is the diversity within The Perfect Collection that is perhaps the most exciting aspect.

“The breadth makes it an opportunity accessible for all. The final part of the sale starts on 10th April and contains incredibly desirable and rare bottles such as The Macallan 1926 Fine & Rare and a 1937 Glenfiddich 64 Year Old. I would encourage those looking to bid to register to take part in the most exciting online whisky in the world to date.”

The second part of the collection will be offered between 10-20 April and features a further bottle of 1926 Macallan (from the Fine & Rare bottling), Glenfiddich 1937 Rare Collection 64 Year Old and The Balvenie 1937 Pure Malt 50 Year Old.

After a long hiatus, various bottles of The Macallan 1926 60 year-old from cask #263 have been hitting the auction block since 2018 and making and breaking records at every appearance. Distilled in 1926, when the whisky was 60 years-old (in 1986) the cask yielded just 40 bottles. Twelve bottles were given a label designed by Italian artist Valerio Adami, 12 more were given a label by Peter Blake and two were sold and given private labels – including one by Irish artist Michael Dillon which was the bottle sold last November for £1.2m.

Two bottles appeared at auction at Bonhams in Hong Kong in May 2018; one with a label by Peter Blake, the other with a Valerio Adami label.

Both went for over $800,000 ($1m with buyer’s premium added), the Peter Blake label setting the record which was then broken a few hours later by the sale of the Valerio Adami bottle.

Bonhams sold another bottle with the Adami label in Edinburgh that October for over £800,000.

In November 2018 Christie’s sold the only bottle hand painted by artist Michael Dillon, the ‘Holy Grail of Scotch’ for £1.2m in London – a new benchmark for a single bottle of wine or spirit ever sold.

Now a bottle with the Adami label has been sold for over $1m in its own right for the first time as well.