The Liv-ex Fine Wine 100 registered another small decrease in January as the secondary market began the year with a less than rousing start. 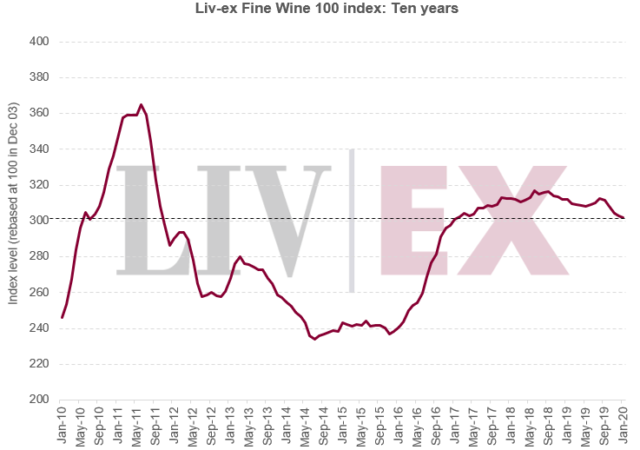 The drop last month was a moderate 0.22% on December’s finish but the benchmark index finished 3% down in 2019 in what proved to be a disappointing year for the secondary market.

Many of the problems that caused such head winds last year were exacerbated in January, not least the on-going saga of US tariffs on European wines, recession and coronavirus fears in the Far East and then the UK’s official exit from the EU on 31 January, Liv-ex explained.

Nonetheless, trade by value on the Exchange rose by 40% as buyers and sellers returned after the December lull.

The 2000 ‘Augsburg Ram’ Mouton Rothschild and Ravenau’s 2016 Montée Tonnerre were also up.

By contrast, wines such as the 2009 Dom Pérignon and Bartolo Mascarello 2014 Barolo, Beaucastel’s 2015 Chateauneuf du Pape which all had “quiet gains” throughout 2019 declined to varying degrees in January.