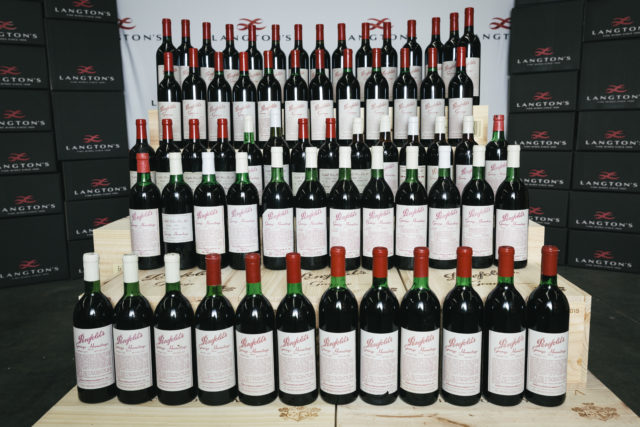 The complete set of 65 vintages was bought by an Australian collector at an online Penfolds auction, which closed at 7pm last night (Sunday 15 December).

Before the sale at Australian auctioneer Langton’s began, the set was predicted to break records. It formed part of 1,800 bottles of Penfolds up for auction as part of a sale called the Rewards of Patience Auction.

Two single bottles of Penfolds Grange 1951 – the first vintage produced – also broke auction records, selling for over $81,000 each. It is believed there are less than 20 bottles of the 1951 in circulation.

A bottle of the 1953 Grange also achieved the highest price recorded at auction for the vintage, selling for over $31,000, beating the previous record of $17,475 achieved in 2017. The Penfolds Grange 1953 was a Penfolds Grange Cabernet, a wine made alongside the standard Penfolds Grange, which is made with Shiraz.

The first chief winemaker of Penfolds, Max Schubert, only made two vintages of the Penfolds Grange Cabernet – 1952 and 1953 – rendering surviving bottles very valuable.

The auction house revealed that the Penfolds vertical, one of the 1951 Grange bottles and the Penfolds Grange Cabernet 1953 were sold on behalf of one collector based in South Australia, who is said to be “thrilled” with the results.

The entire auction, which is held every six months, this year achieved over $1 million. Final prices include a buyer’s premium – a 16.5% additional sum which includes a goods and service tax which is paid on top of the hammer price.

Commenting on the sale, general manager of Langton’s, Jeremy Parham, said: “We’ve seen fewer and fewer of Penfolds Grange sets on the markets, and the collectors are certainly looking for them, so watch this space – I’m sure the demand will keep going up.

“Every set is unique and has its own unique value depending on its condition and provenance. This was a super set that was in perfect condition, so I’m not surprised about the result.

Tamara Grischy, head of auctions at Langton’s, added: “It’s rare to have one, let alone two bottles of this historic vintage [1951] in the auction, and for both bottles to fetch this price is absolutely sensational.

“It is believed there are less than 20 bottles in circulation, and the 1951 Penfolds Grange is coveted among collectors who want to have a complete set. This wine truly represents the beginning of modern Australian wine, as Penfolds Grange has put Australia on the world map of fine wine.

“The market demand for Penfolds remains strong and healthy. I think we love Penfolds because it’s such an Australian story, it’s the underdog story defined. Max Schubert was Penfolds first chief winemaker, who started making the Grange as an experiment. At the time, Australian winemakers were mainly making fortified wines.

“He believed in his conviction, and he kept making the Grange, although he was actually told to stop making it by his supervisors. He was a rebel, and the wine world can forever be grateful for his refusal to do what he was told,” she added.

The next Penfolds auction at Langton’s will take place in June 2020.