Majestic ‘getting back to what we do best’, new boss claims

Majestic is bringing back classic wines and “getting back to what we do well”, its new boss, John Colley, told the drinks business as it unveiled its newly revamped range this week.

Speaking to db at this week’s tasting, newly ensconced executive chairman Colley, who was managing director of the UK retailer between 2015 and 2017 under its previous owner, said the new range contained some household favourites that had for one reason or another, been taken out in previous years.

“These are things our customers like and our colleagues like, so I think we’ll be well positioned going forward,” he said.

The team had focused its energy on producing a strong Christmas range, buying in around 2 million more bottles to see it through Christmas and Brexit, and a “great” promotional platform to support it as the retail sells a disproportionate amount of big statement brands and products in the key December period, he said.

“It gives energy to our colleagues in store and if we come out with a great set of results, it’ll put us in a great position for the New Year,” he said. “We’re all pumped up to do it.” 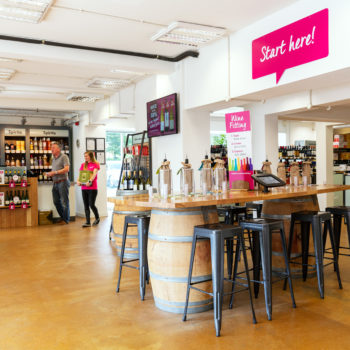 The new owner, Fortress Investment Group, a US investment firm that is owned by Japanese-owned SoftBank, was committed to the retailer’s “unique position and leading proposition” on the UK high street, he said, which gave the wine specialist the opportunity to get “back to doing what we do best”.

There was, he added a “strategic opportunity” for Majestic to ensure that the range was “significantly different to those in the supermarkets”, especially under its new buying & merchandising director, former Tesco BWS boss Rob Cooke.

“We need the stable brands that customers look for, but also different, interesting things you can’t get in a supermarket. Rob Cooke’s experience will help us build that, and that’s what the store teams like selling – interesting wines that are great quality,” he said.  “We need to make it a key part of what we do, otherwise, we’re just selling volume wines that you can get in a supermarket and that won’t set us apart.”

Answering industry criticism that Majestic needed to “ditch the shoddy own label and lacklustre brands”, Colley argued that the specialist had the ability to created brands, much as it did with its best-selling Porta 6 wine – although once these entered the mass market and other retailer’s shelves, they became “less important”.

“We need to work strategically with our suppliers to ensure that we keep innovating with them,” he said.

“I want us to be working more closely with those suppliers who can make a difference to us and for our customers. Whether that’s putting the wine in a Definition bottle or their own brand, it doesn’t matter, as long as it makes Majestic a compelling place to shop,” he said.

The business, he argued had come out of a “very difficult period”, but the business “genuinely believes” that its biggest assets is its people and its store network. “The question is how do we get them working well with each other to generate growth?” he asked.

The new owner was committed to Majestic as a brick and mortar operation with an online presence, rather than a website with stores attached, he added.

“Fortress see it as an opportunity to get back to doing what we do well, and property and stores form a key part in that,” Colley told db. “They see it as a bricks and mortar retails with an online arm, not a web business with some shops, which is where I think Rowan [Gormley] was intimating it was going.”

“When you’re selling the company, there’s a huge amount of uncertainty for suppliers, customers, stakeholders, but I want to be very clear that the business is strong still, it’s been a tricky six months while the team have been going through that transaction process, but we’re not going anywhere, we’ll be building a plan where we’re going to grow, that’s why Fortress have bought it.

“We believe there’s some growth in the business by getting back to doing what it does well. And we need to pull that together.”

Part of the plan going forward will be to look at the format of its stores, he said.

“We are committed to our retail structure and physical space, but we need a format strategy that is relevant for the future, so we will look at new sites… whether that’s the same size of smaller of different.”

Citing Bristol, which has a population of around 500,00 people but only two Majestic stores, he said the question was not if you could have have more stores, but “what kind of stores we we need?”

“The shape of the chain may change but the physical presence will still be there.”