We bring you the results in full from this year’s Rosé Masters, which saw pink wines from Provence get top results, although samples from Corbières and Tuscany also impressed our exacting judges.

Of all the categories in the vast universe of fermented grape-based drinks, rosé is the most dynamic. With the rising call from consumers for pale pink wines, above all from Provence, it seems almost every corner of the wine world is now making a rosé, and in the lightest possible shade of pink.

With such an influx of new products, it has become more important than ever before to blind taste the latest entries to this fast-expanding sector, whether it’s range extensions from long-standing pink wine producers, or the latest vintage from famous rosé regions, as well as complete newcomers to the category. Over recent years, the Global Rosé Masters, which is the largest rosé-only blind tasting in the world, using the trade’s top palates, has unearthed some wonderful and unexpected sources of great rosé, and 2019’s competition was no different in this regard. It has also highlighted the general strengths and weaknesses in this important and increasingly commercial category of drinks.
In terms of the good points, it seems that more winemakers are mastering the challenge of creating something that is both fresh and delicate, as well as ripe and soft. This can be made harder if the wine must also – as the market demands – be extremely pale.
In my view, rosé should have juicy flavours of red berries and peach, and a finish that is bright, if not biting. It should have appealing summertime aromatics of fresh red fruit, and a texture that ensures it slips down the throat with no harshness, but a soft acidity that makes one salivate.
Where the samples fail to get top scores, it is usually because the wines lack some of the riper fruit characters in the drive for delicacy and refreshment, with, sadly, some of the entries tipping into the herbaceous flavour spectrum, giving them a firm greenness that takes away from the pleasure of sipping rosé.
At the finer end of the rosé scale, where retail prices exceed £20, I am not in support of the school of thought that says oak has no place in pink wine. It’s a view I don’t understand: why should the colour of the drink dictate the winemaking approach? After all, one wouldn’t say that about white or red wine, so why would one about rosé?

While there are great examples of pink wine at high prices that see no oak influence, there are more outstanding ones that do (three of our four Master-winning wines were in the ‘oaked’ category). Where barrels have not been employed to add texture and complexity, producers have turned to other techniques to add palate weight, such as lees influence in tank, as well as the careful selection of ripe fruit, rich in flavonoids, and no doubt picked from older or lower-yielding vineyards.
Here, the pleasure comes from the fruit intensity, the balance between softness and freshness, and the layers of flavour that can come from a blend of sites and grape varieties, and ageing on fine lees. Aromatics are vital to the appeal of a rosé, and to capture them, producers must handle the grapes sensitively, with the chilling of the berries a necessity as soon as they are picked, as well as during the winemaking process.

What about those top-end pinks that have some form of barrel influence, including a proportion of new oak? This is something that Château d’Esclans has pioneered and perfected in the rosé category, using its best wines from its oldest Provençal vineyards. Key to the appeal of these wines is the match between the soft ripe fruit flavours and the nutty, creamy characters imparted by the barriques – each of which is temperature controlled to retain the fresh berry characters of the Grenache that dominates in their wines. In essence, these wines are a hybrid, combining the complexity of a barrel-fermented Chardonnay with the aromatic appeal of a Mediterranean rosé.
However, Château d’Esclans no longer has a monopoly on such a style. As we’ve highlighted before, Gerard Bertrand has burst onto the upmarket rosé scene with great success, particularly his smoky, gently toasty Château La Sauvageonne La Villa from the Languedoc.
This year, there was another entrant to this tiny category of top-end oak-influenced fine rosés, and it didn’t come from France. For me, this year’s most interesting find was from Frescobaldi, and it was a barrel-fermented and aged rosé from Tuscany, called Aurea Gran Rosé. It employs a complicated winemaking process, but, like the great rosés of Château d’Esclans, the fermentation takes place in temperature-controlled barrels – which in the case of the Frescobaldi pink – are 600-litre French oak, with 20% of them using new staves. An added layer of complexity in this wine also relates to the addition of a small proportion of reserve wine from a previous harvest; a white produce from Syrah that has been aged in barrique for 20 months.

The addition of this particular wine to the ranks of our Gold medal-winning rosés also draws attention to a trend that’s gathering momentum in the pink wine category – the increased quality of rosés from Tuscany. These are often sourced from coastal locations, and employ a touch of Vermentino – which is, after all, the Italian synonym for Rolle, the white grape used widely in the rosés from Provence. Three first-rate examples of Tuscan rosés were sampled blind this year, one from Fattoria Sardi, one from Banfi, and another, called Alie – like the aforementioned Aurea – from Frescobaldi. These weren’t the only standouts from Italy, however, with the Scalunera Etna Rosato from Torre Mora another delicious pink, and using Sicily’s fashionable Nerello Mascalese, a grape that’s adapted to the rocky hillsides of this Italian island’s active volcano, Etna.
Elsewhere, we were highly impressed by the quality-to-price ratio seen in La Dame en Rose from the Languedoc, a Carignan, Cinsault, and Grenache stocked by UK supermarket Marks & Spencer, retailing for just £6. We were also pleased to see a lovely pink blend from Bordeaux called Lion & The Lily, along with a delicious Pinot rosé from Marlborough, made by Marisco Vineyards, and a benchmark Provençal example from Château Léoube. Corbières in the Languedoc was a source of a stand-out rosé from quality-orientated co-operative, Les Vignobles Foncalieu, called Château Haut Gléon, while the highest-scoring unoaked rosés in 2019 were made by Château Minuty, with its Minuty 281 the better-value option, while its £50+ Rosé et Or gained the ultimate accolade of Master.
A mention should go to Canada’s Mission Hill, which gained two Golds for its delicious blended rosé from its vineyards in Osoyoos in the Okanagan Valley, as well as to Gusbourne in the UK, for its delicious sparkling rosé from Kent, although Coates & Seely’s pink English fizz from Hampshire came close in quality. We were also impressed by the style of sparking rosé from Champagne’s Nicolas Feuillatte, which is crafting a chalky style of fizz with a touch of crunchy red berry fruit.
Finally, although we’ve already written about Château d’Esclans, this year’s blind tasting once more proved that this producer is at the top of the pink wine pyramid, picking up three of the four Masters given out this year. Indeed, this Provence estate’s Les Clans, and its ultimate expression, Garrus, should be served, preferably ‘blind’, and in black glasses, to those who believe that wine can’t be both pink and serious, layered and ageworthy.
Such is the quality of these products that rosé should now be included in a list of truly fine wines.
Read on for the full list of medallists, judges comments, and more information about the competition. 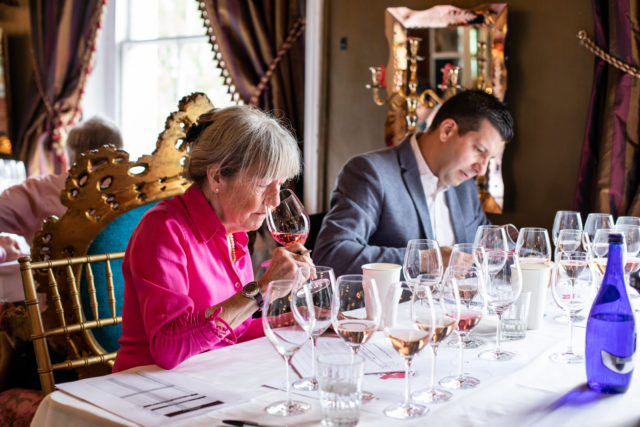 “Under £10 there were some genuine, easily quaffable crowd-pleasers with abundant fruit and nicely judged vibrant acidity to balance the wines out.
“The £10-15 bracket was a bit variable, and provenance did not matter much. The Provençal wines appeared fairly consistent. At this price point there were also some nice surprises from Greece, Argentina and South Africa. Above £15 there is an expectation that the wines will deliver an exceptionally enjoyable experience. And it is true that the best producers, whether in Provence or elsewhere, delivered excellent wines. The oaked wines were a delicious group. Even at £10-15, the wines were balanced, with oak gently accenting attractive red fruits. Above the £20 price point the wines were glittering gemstones.” 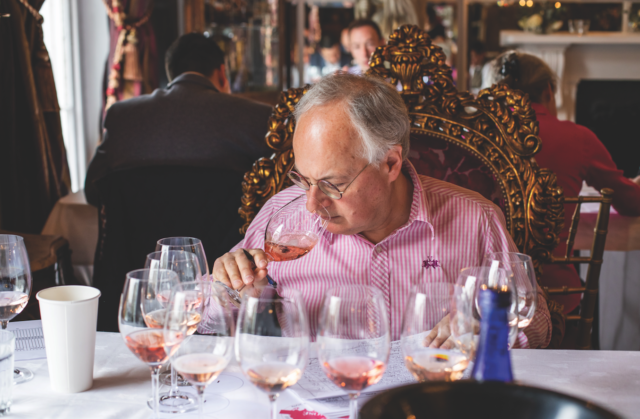 “As has been the case for the past couple of years, it is obvious that the Côtes de Provence style (extremely pale colour, restrained fruit, angular light-bodied palate) is the paradigm. It is perhaps fanciful to sense that in many cases there had been the potential to make more overtly fruity wines but that the winemakers, marketers or
accountants had decided otherwise. Following on from the above, I guess that we in the industry have to acknowledge that a lot of consumers prefer wines that are not hugely expressive.
“As far as origin is concerned, the surprise was that three of our Golds were Italian. Two were Sangiovese-based wines from Tuscany and the other a Nerello Mascalese from Sicily.” 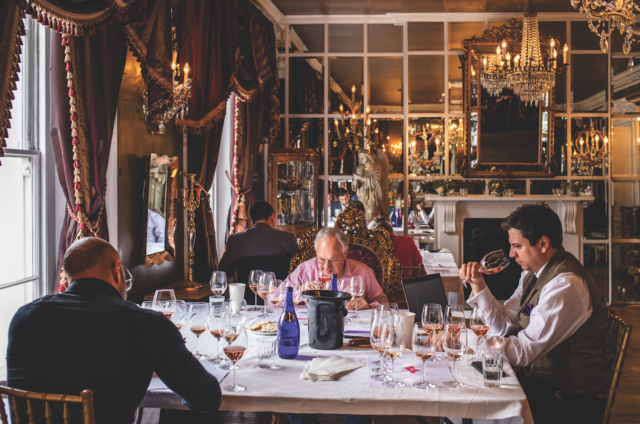 The Drinks Business Global Rosé Masters is a competition for all styles of rosés from around the world. This year’s event saw almost 200 entries judged blind by a panel of highly experienced tasters. The best wines were awarded medals which ranged from Bronze through to Gold as well as Master, the ultimate accolade given only to exceptional wines in the tasting.

The wines were tasted at Beach Blanket Babylon Restaurant and Bar in London’s Notting Hill on 16 April. This report features only the medal winners.

For further information on the Global Masters please call +44 (0)20 7803 2420 or email Sophie Raichura at: sophie@thedrinksbusiness.com

VIDEO: INSIDE THE GLOBAL ROSÉ MASTERS 2019