Brewdog, Boris and Brexit: Should beer be political?

Scottish brewer Brewdog has launched a beer to protest almost everything about the UK’s political climate, but consumers’ reactions haven’t been as positive as they were for the brand’s past subversive serves. 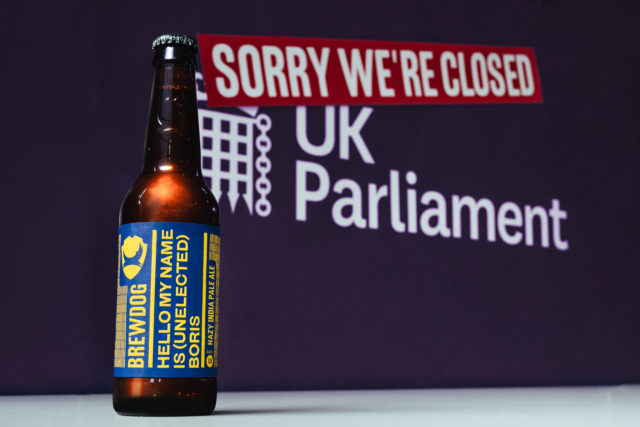 BrewDog is offering UK MPs free bottles of a beer it launched to protest Boris Johnson’s suspension of parliament, but “cannot ferment beers and design labels quick enough to keep up with the chaos”, according to the brewer’s website.

“BrewDog is today announcing the launch of new protest beer, ’Hello My Name Is (Unelected) Boris’,” it said, adding that it had initially designed the beer to protest Johnson’s decision to prorogue parliament.

With the beer launching today (5 September), Brewdog is also offering MPs who “find themselves without an office” a free bottle of the new 5.2% ABV hazy IPA.

James Watt, CEO and founder of Brewdog, said: “We know the best way to bring people together in uncertain times is with incredible craft beer. So instead of a placard, we’ve put our passion for craft into making this iconic beer for us all to drink while we wait for democracy to turn up again. Cheers.”

However, within an hour of Brewdog announcing the launch on social media, negative comments began piling in, with many users saying they would steer clear of the brand after it decided to venture into politics.

Hummmm. Maybe you should stay away from politics?

Pathetic. Also shows a total lack of understanding of how a parliamentary democracy works. We do not elect a prime minister.

Brewdog has a track record of releasing “protest” beers. It released ’Hello My Name Is Vladimir’ in 2014, to protest the Russian president’s anti-gay stance ahead of the Sochi Winter Olympic games.

But while the Vladimir beer launch was covered by a number of publications including Metro.co.uk, the Independent, and the BBC, this launch hasn’t been met with quite the same enthusiasm – even though there were a fair few positive reactions online.

Wow people are way too serious nowadays looking at some of the comments below. Think it’s great, I’m fed up of people being offended by every single little thing around nowadays cant we just chill a bit and have a laugh now and again !

It’s difficult to ignore the number of people urging Brewdog to “stay away from politics”, something the company has never been known for.

This not the first time beer and government structures have collided. When US President Donald Trump shut down the government for 35 days at the start of 2019, Washington D.C.’s breweries and bars threw federal workers a lifeline. They launched a website that allowed people to donate a beer to a civil servant while government services – and staff salaries – were put on hold.

The website, which also gained support from Pabst Brewing Company, received more than 4,600 donations from members of the public. Over 600 beers were paid for by the public paid and still have yet to be handed out. PayitFurloughed has said these have been put “on ice” until they’re needed for another shutdown, “which we hope doesn’t come anytime soon”.

Daniel Hooper, director at drinks marketing agency YesMore, told the drinks business he found it “surprising” how many people were put off by the stunt.

“This is absolutely par for the course for Brewdog,” he said, pointing out that it has created and named beers to respond to a fair few political leaders – from Putin to Trump, and even given general election voters free beer in the UK.

He said the brand is trying to to reflect its independence, as well as “jump on the news agenda for publicity”.

“In this case, they’re also offering MPs free beer and dropping in that they have co-working spaces – it’s a bit of the usual opportunism, but it continues to work for them.”

“It’s surprising, then, that people are criticising this, given Brewdog’s history.”

Hooper said he believes this launch would appeal to core fans and “of course, as with all Brewdog moves, it’ll attract publicity, attention and new drinkers.”

“If you want a brand that stays out of politics, Brewdog isn’t it!”

Should beer be political?

So it is surprising that so many are calling for Brewdog to steer clear.

“Whether by lobbying behind the scenes or more overt things such as Tim Martin of Wetherspoons’ support of Brexit, the Brewdog “protest” beers, or the creation of IPA beer in the first place, to ship out to colonial Brits in India – you can’t separate the two.”

But tapping into the ideologies of your target audience can backfire.

“It has to fit with the brand,” he said.

“We did some research for an industry body last year which showed that Brexit or similar issues cropping up in branding was likely for relevant brands. It grabs headlines and attention.

“But for a more traditional brand, or one that’s owned by a larger corporation (think Fullers, owned by Asahi, or someone similar), this just wouldn’t fit and would leave people scratching their heads.”

Brewdog is a larger business than it was when it launched ‘Hello, My Name is Vladimir’. As well as production facilities in Scotland, and the US, it now also operates around 90 bars worldwide, and is expected to have 100 pubs by the end of 2019.

The company has also had some negative reactions to some politically-themed stunts in recent years, such as “Pink IPA” – a re-branded version of the brewer’s flagship ale Punk IPA launched on International Women’s Day, advertised at the cut price of £4 as part of a national campaign to highlight the gender pay gap.

And let’s not forget the uncomfortable moment Brewdog had to cancel a partnership with US brewer Scofflaw after it said it would hand out free beer to British backers of Donald Trump.

Hooper said the launch is “a move that not everyone could afford to take, in terms of answering to owners, shareholders and more, but it’s intrinsic to Brewdog’s way of working.”

Should brewers stay away from politics? Let us know in the comments…