Craft beer giant BrewDog has cancelled a series of events in partnership with US brewery Scofflaw after a press release was sent out by the latter’s PR agency promising free beer for supporters of the US President Donald Trump.

In a press release sent out yesterday on behalf of Scofflaw Brewing, it was stated that free beer would be given to Trump supporters.

It read: “This weekend see’s (sic) redneck US brewers Scofflaw (known as the Jackass brand of the brewing industry’) partner with badass beer brand BrewDog to launch in the UK.

“The self-confessed ‘trailer trash’ brewers are renowned in the states for their lawless attitude and have landed in London today – their aim?

“To get the UK ‘beered up redneck style,’ completely free of charge! But there is a hook… you have to be a Trump supporter.

“Scofflaw are putting tens of thousands of pounds behind BrewDog bars in Shoreditch, Soho, Shepherd’s Bush, Tower Hill, Manchester and Leeds over the next 7 days and are intending to crash onto the UK beer scene with their tagline:

“‘There’s a little dissent in everything we do'”.

A short time afterwards, BrewDog took to social media to deny knowledge of the release, adding that it had been sent out without its “knowledge or consent”.

It added: “We are in no way aligned with their position and we will of course be cancelling all the events and sending all of the beer back”.

Scofflaw have also subsequently denied knowledge of the press release, which was sent out by its PR firm Frank.

We did not approve or release said message and we are working with our PR firm @WelcomeToFrank to fix this error. This post was done on our behalf without our consent or knowledge. More details and official release to come. 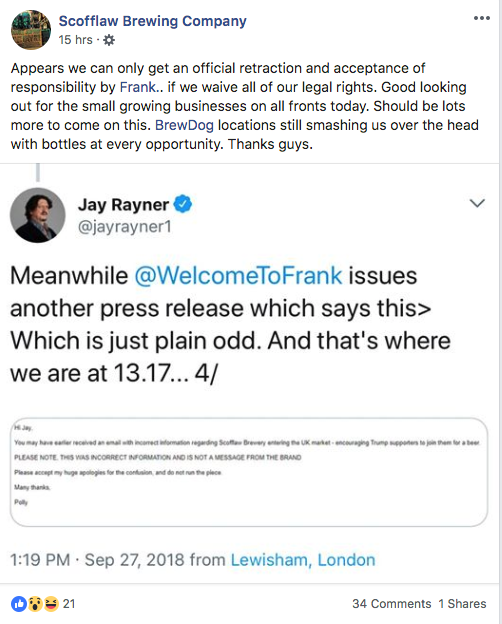 In a Facebook post in response to a Tweet from food critic Jay Rayner, the brewery said that “it appears we can only get an official retraction and acceptance of responsibility by Frank (PR firm) if we waive all of our legal rights”.

Co-founder of BrewDog, James Watt, also added that he’d received a phone call from the PR agency, who added that the release came from a “rogue element in their team”.

Just to confirm the Scofflaw release came from their agency not ours and we had zero knowledge of any of this this. And as soon as we knew, we cancelled the events. The agency @WelcomeToFrank called me to say the release came form a ‘rogue’ element in their team. What a mess.

BrewDog has therefore decided to cancel its UK partnership with Scofflaw and has said it will send the beer back to the US.

It will now be offering a free beer promotion at all of its UK bars, BrewDog Brussels bar and BrewDog Berlin Mitte “to anyone who shows up to our bars in the name of love not hate”.

The Scofflaw events, which were scheduled to take place next week, would have seen BrewDog stock Scofflaw’s Basement IPA and Passionfruit, Orange and Guava (POG) beers in its 36 UK bars with guest taps. Scofflaw was also due to tour the UK, allowing punters to try its Double POG IPA and Barrel-Aged Stout.

However, BrewDog USA and Scofflaw announced a year-long partnership at the end of last year.

As part of the agreement Scofflaw gained exclusive access to BrewDog’s Ohio brewery to increase production of its canned beer.

Co-founder of Scofflaw Matt Shirah said at the time: “We can, no pun intended, continue to produce beer and simultaneously build out our third expansion. We are also working to develop our own, more sophisticated Atlanta-based canning operation. Our current draft production facility and tasting room will stay in place and where it belongs, on Atlanta’s Westside”.

BrewDog has not commented as to whether this partnership remains in place.