Tottenham Hale-based brewer Beavertown is hosting an event to encourage more people to sign up as blood donors by giving away free pints of its Bloody Ell’ Blood Orange IPA. 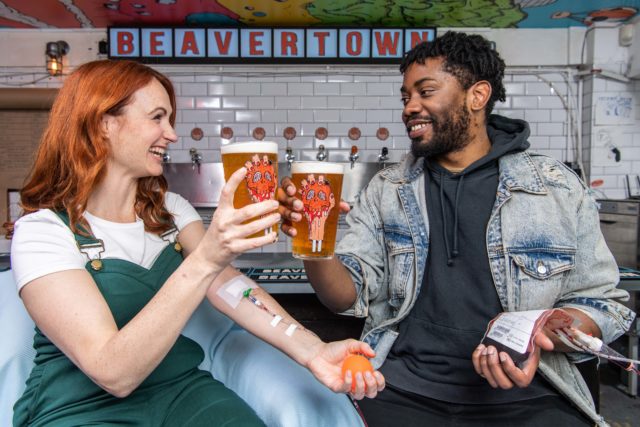 The London brewery is giving away its fruity beer to the first 500 people who visit its taproom from 2pm on Saturday 25 May who can prove they have signed up to be a blood donor.

At the start of the year, the NHS Blood & Transplant Service issued an appeal for more donors, in particular those that are male. According to figures published in January twice as many females gave blood in England than males in 2018.

The organisation stated that 13,719 women who registered last January became blood donors, compared to only 6,092 men. Men are more likely to have blood which can be used for products like platelets and allogeneic serum owing to the fact their blood contains fewer antibodies against red and white blood cells. Women often generate these antibodies during pregnancy, while their blood often contains less iron than men.

Last year a total of 830,000 people gave blood with over 200,000 new donors required each year to replace those who can no longer donate due to reasons such as ill health or pregnancy.

Mike Stredder, director of Blood Donation for NHS Blood and Transplant, said at the time: “It’s vital that more men start donating blood because their blood is used to provide life-saving products like plasma and platelets – to save victims of burns, car crashes and treat to patients with cancer.

“We’re incredibly grateful to all our female donors who are vital in providing lifesaving blood to those in need. But we need men to catch up with recent recruitment because their blood can have different characteristics which can make it important in certain situations.

Beavertown hopes that its campaign will encourage more men to sign up.

Beavertown brand manager, Sam Millard, commented: “Giving blood is something all of us would like to get behind, from our staff, friends and family and our customers whose lives have been saved by blood donations.

“The NHS says we need 400 new donors every single day to keep up with demand – so by celebrating Bloody Ell with this ‘bloody’ twist, we want to smash that 400 target.

“We’re giving craft beer fans who haven’t got around to giving blood another great reason to sign up and book in their appointments.”

Last month, the brewer tweaked the recipe of its blood orange IPA, reducing its alcohol content and working with suppliers to ensure the orange pulp used in the beer can be stored and preserved to be used all year round.

In a blog post, the company wrote: “Bloody ‘Ell has always been one of our favourite brews, but it’s always been restricted for two reasons. One is the oranges, the sources we’ve used have only been able to get them to us, in the form we need, during the late winter and spring.

“Advancements in how our suppliers process the oranges means that we can now get them in the form of a comminute, which is basically an extremely fine pulp that they can now instantly pack in and seal into an inert atmosphere, meaning we can store the pulp and produce year round with an ingredient as fresh as it was when packed.

“Two is the ABV. At 7.2% it’s a beast of a beer that has stopped drinkers in their tracks after their second pint. Not anymore! This year, Bloody ‘Ell is back, and it’s back for good. We’re turning down the ABV to a more sessionable 5.5%, while doing so we’re making sure we retain the juicy malt bill that has always been the backbone of the brew along with the citrusy, hoppy top notes and most importantly we are turning up the orange.

“To sum up, from now and forever more Bloody ‘Ell will be all about more juice, less loose, and that is something we think everyone can get behind.”