Is the craft beer ‘gold rush’ over? UK brewery growth plummets in 2018

The number of breweries operating in the UK has increased by eight within the last year, compared with 309 in 2017, according to financial firm UHY Hacker Young’s latest report on the craft beer market. 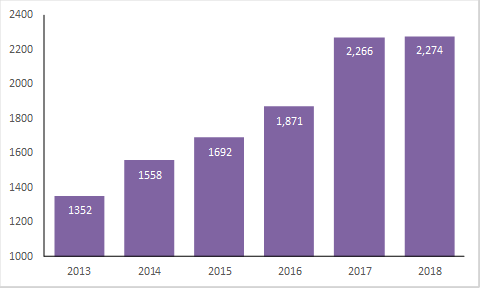 The report showed that, while the number of independent breweries operating in the UK has almost doubled within five years, the sector’s growth has now stalled significantly.

But since then, the financial firm said that the market has become “difficult for new entrants” as large-scale companies have started to buy and invest in successful “craft” breweries.

Australian producer Lion is one of a handful of drinks giants that have been growing their presence in the UK by acquiring craft breweries. Last month, it bought a 100% stake in Huddersfield’s Magic Rock for an undisclosed sum, having already acquired south London-based brewer Fourpure in 2018.

Other independent brewers that have been sold to global drinks giants include Fuller’s, which was snapped up by Japanese giant Asahi in January, London Fields, which Carlsberg bought for £1m in 2017, and Lagunitas, which sold the remainder of its business to Heineken in May the same year.

Brewery owners that sell their businesses to major players like Carlsberg and Heineken can take advantage of their established distribution networks and tie-ups with pub chains and retailers, allowing them to negotiate for ore shelf space or room on the bar. This, in turn, makes it more difficult for newer breweries to compete.

James Simmonds, partner at UHY Hacker Young, said that the sector isn’t necessarily shrinking, but that companies in the sector have started to consolidate, and as a result, “sales growth is going to be harder to come by.”

“Craft breweries need to ensure their business model is sustainable and profitable at an earlier stage and not just rely on the idea they’ll constantly be able to grow their way out of trouble.”

Simmonds added that companies like AB InBev or lion “can no longer count on the traditional beer market to further expansion,” and instead should look for “new, niche products with high growth potential to fuel their revenue and profits.”

“With supermarkets offering limited shelf space and a slow rotation of brands, small craft brewers will need to innovate to break into the market.”

A spokesperson for the Society of Independent Brewers said it is “worrying” to see global brewers buying out younger businesses, and recently launched a campaign of its own to raise awareness of which beer brands were owned by major corporations.

However, the spokesperson added that looking at the number of new breweries along is “a poor indicator of the strength of the craft beer industry, as whilst there have certainly been more brewery closures over the last twelve months compared to previous years, SIBA members’ overall beer production volume has still increased.”

“So whilst some smaller brewers are closing due to increased market competition, other independent craft breweries are seeing impressive growth and the consumer demand for craft beer has never been higher.”

SIBA carried out a survey last month, which found that 98% of consumers in the UK think a beer brewed by any major brewer can’t be considered craft. Some 43% of the survey’s respondents said that a craft beer could only be made by a small brewery, while 42% said a craft brewer must be independent.

“The buying out of previously independent craft breweries by the global brewers is a worrying trend for the industry though…SIBA are actively campaigning to increase transparency on this issue with the promotion of our Assured Independent British Craft Brewer seal.”

“Consumers deserve to know what they are buying and recent research published as part of the SIBA British Craft Beer Report showed that just 2% of consumers believe craft beer can be made by Global brewers. Products such as Maltsmiths from Heineken and Hop House 13 from Diageo are designed to have the aesthetic of a craft beer without any of the authenticity or full-flavour of a genuinely independent craft beer from a smaller brewer.”