Art Russe: An outlier of Saint-Emilion

At a recent masterclass hosted by the drinks business Hong Kong, and led by Darius Allyn MS together with estate director Laurent Prosperi, around fifty of Hong Kong’s leading sommeliers and buyers were invited to see what made the estate different.

Located between the towns of Saint-Émilion and Pomerol, the 8.5 hectare boutique winery defies convention and stands out from its neighbours in terms of label design, winemaking and its modern architecture.

To begin with its grand vin, named ‘Art Russe’, is the only wine the estate produces and celebrates a rare combination of Russian art and wine.

Devoid of the vineyards or château conspicuous on most Bordeaux wine labels, each vintage features 12 different reproductions of original Russian art pieces curated by the Filatov-owned Art Russe Foundation, which boasts the biggest collection of Russian artworks of the 19th and 20th centuries in the world.

Speaking of the singular wine production, Prosperi explained: “We want to make a good representation of the terroir and the vintage, so that’s why we decided to make one wine.”

The winery itself has undergone a complete makeover that has transformed the once humble century-old estate into a modern architecture marvel by Pritzker Prize-winning architect Jean Nouvel.

Featuring a cylinder fresco that depicts vinegrowing from budding to harvest, alluding to the full cycle of a vine’s life, the modern winery is also equipped with a vinification room and two separate underground cellars for fermentation and ageing. All are designed to allow gravity flow without any pumping over for excessive extraction.

Inside the cellar, it’s Louis Mitjavile, renowned Merlot expert and son of Francois Mitjavile, who sets its wine apart from surrounding neighbours.

Different from Médoc, classical Saint-Émilion is always sweeter on the palate, thanks to the more lush, plum character of its Merlot compared with Cabernet Sauvignon. Well-versed in cultivating the grape, Mitjavile has another trick up his sleeve to coax the maximum plushness and flavours out of the grape by playing a long waiting game.

Harvest starts only, as Laurent Prosperi, director of Château La Grâce Dieu Des Prieurs, explains at the masterclass, when “everything in the bunch is completely matured”. 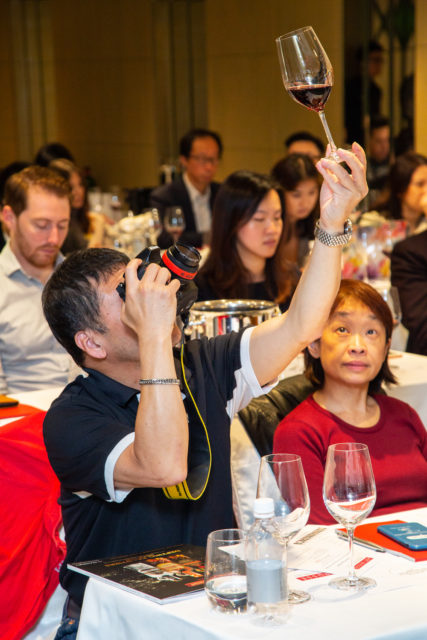 “This means the grapes are picked with full phenolic ripeness, a practice that Mitjavile has insisted and inherited from his father who would pick grapes for as long as two weeks back in 1980s,” Darius Allyn MS explains.

Even in challenging vintages threatened by fungal disease, the quality of the grapes with a relatively late harvest is guaranteed with meticulous selection in the vineyards. For an 8.5ha vineyard, the winery employs about 15-20 harvesters to select the grapes, says Prosperi. Yields per hectare are strictly controlled at a lower level (roughly 30hl per ha), another signature of Mitjavile, adds Allyn.

When it comes to ageing, Mitjavile delivers yet another surprise by using only 100% new Radoux blend barrel, made from “most finely grained” and the “tightest” French oak.

This led Allyn to praise the oak integration in the three wines showcased at the masterclass, namely 2014, 2015 and 2016 as “seamless”, which is no small feat as one of the most constant criticisms against Saint-Émilion is the less than satisfactory integration of oak and alcohol in the wine.

A trio of success

The 2014 vintage, the first release from the château under the new ownership, is already hailed by Allyn as the “most elegant” and “most perfumed” out of the trio, and came out as one of the two favourites among more than 50 attendees by a show of hands.

During the year, producers on the Right Bank had to contend with more rain in the winter, which created a challenge for early ripening Merlot. But for an estate situated on the Saint-Émilion plateau with a mixture of limestone, loam, gravel and sand in the soil, the mixture helped to regulate water levels.

Additionally for a small estate, the hands on approach gave an extra layer of scrutiny on quality.

“When you are a smaller estate, you can really focus on attention to detail on every simple aspect from grape growing to winemaking, and they only make one cru wine, no secondary label,” Allyn exclaims.

Following the 2014 vintage, guests tasted the 2015 vintage, a stellar vintage for Bordeaux, which according to Prosperi is a “precise vintage” that saw everything done perfectly. From growing to harvesting, it was a triumphant year for Right Bank Merlot to such an extent that the estate director called it “ideal”.

Even among a cross-the-board stellar vintage, two appellations stood out. Critics singled out Saint-Émilion and Pomerol as the star appellations for the vintage. A generous wine, redolent of fruits, with intensity and depth, the wine is a favourite among the attending guests. “The vintage is really expressing the warmth of the year, and the grapes have really seen the sun,” adds Allyn.

For the 2016 vintage, Right Bank luckily avoided a wet spring, but was met with a drought lasting till mid September. The berries are therefore smaller and more concentrated and packed with tannins. Describing the wine, though still in its infancy, as an in-between of 2014 and 2015 vintage, Allyn said: “It has the ripeness but not necessarily the density in 2015. And it has the purity. With more time it will show more complexity”.

Aside from the liquid in bottle, the affinity between art and wine is something that the estate takes pride in. In addition to its regular bottlings, Art Russe’s magnum collection are bottled in ancient Bordeaux amphora-shaped bottles.

Different from the darker green colour opted for the 750ml bottling, the magnum comes in a bright green colour and is adorned with an additional 13th artwork, says the chateau.

Various gift-packaging are also available including a chess case, leather case and an award-winning special gift box made of wood and concrete. 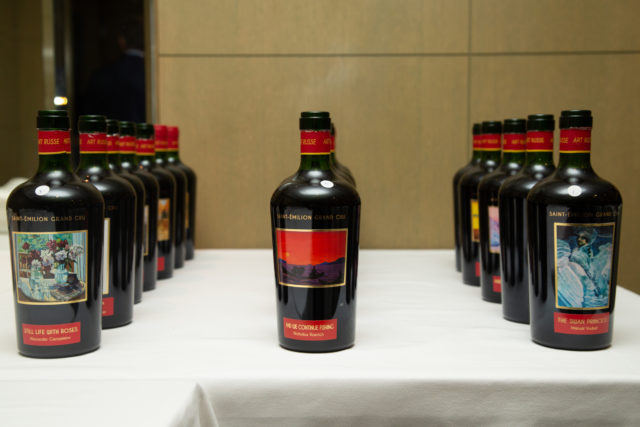