There’s a certain type of drunk that knows how to pick a fight, but this chap in the Chinese city of Changshu managed to start one with a stray dog. 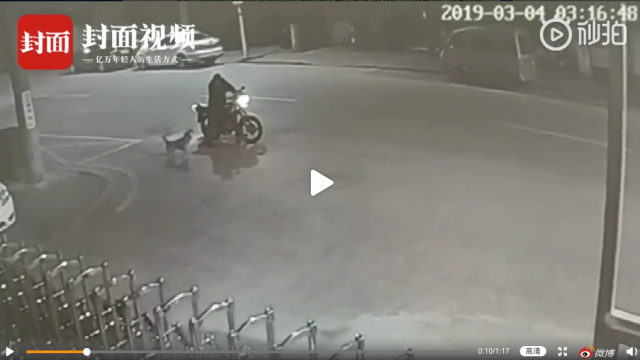 The drunk man had dozed off on his stationary motorbike on the night of 3 March when he was woken by the barking of a stray dog.

As reported Chinese media Cover Story, security camera footage shows the man, named only as ‘Shao’, getting into what appears to be a spirited argument with the animal.

You can watch the tense standoff here, which has become viral and been watched close to 9 million times since it was posted on 8 March.

Annoyed at being woken up, the man started talking back at the dog, pointing at it and chasing the dog until it retreated into a gated factory building.

With the gate dividing the two, the man was seen shouting at the dog in an ‘argument’ which lasted for a good 30 minutes.

Things then escalated when Shao decided to ram his motorbike into the gate repeatedly.

The loud racket woke up some people inside the factory, who then called the police.

Shao has since been arrested.

Many users on Sina Weibo, a Chinese social media platform, commented that the man should thank the dog since it at least managed to distract him from driving and having an accident.