On this day 1919…Prohibition is ratified

One hundred years ago, on 16 January 1919, the United States Congress ratified the 18th Amendment leading to the complete prohibition of “intoxicating liquors” in the country. 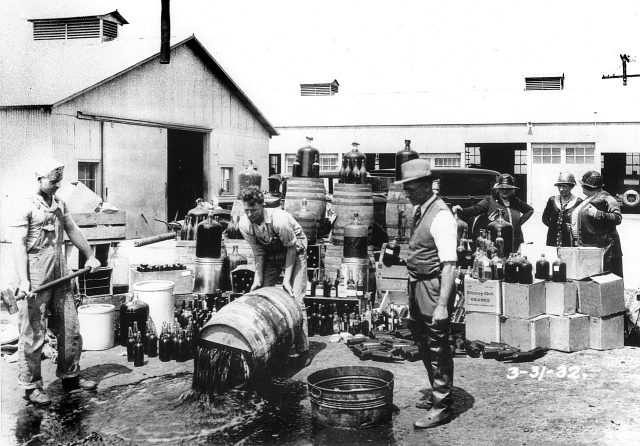 The amendment was first proposed in December 1917 before being ratified by states in January 1919 when North Carolina, Utah, Nebraksa, Missouri and Wyoming ratified it.

Seven more states would ratify the amendment between 17 January and 25 February 1919 and New Jersey passed it in March 1922. Connecticut and Rhode Island both rejected the amendment.*

In October 1919 Congress passed the Volstead Act – named after Judiciary chairman Andrew Volstead who supported the bill – which allowed for Federal enforcement of Prohibition.

Having ratified the amendment and introduce the Volstead Act, Congress announced that full Prohibition would be implemented on 17 January 1920.

The amendment had of course grown out of many decades of temperance activity and lobbying in the US.

The popular image today is of it being a movement led by pinched, busy body, Protestant, mid-Western spinsters with Carrie Nation becoming a prominent figure in the movement.

She famously led women into saloons and smashed them up with hatchets and hammers while singing hymns and quoting the Bible.

It is often forgotten, however, that Nation had died in 1911 and the temperance movement was powered as much, more so in fact, by God-fearing men.

Volstead of course was one but there was also Neal Dow and Wayne Wheeler, the head of the Anti-Saloon League.

These were strict, evangelical Christians, largely from Protestant denominations such as Methodism and Baptism, who saw alcohol as an evil and the root cause of nearly all social ills from accidents at work, to broken families, violence and vice.

Then there were political campaigners who saw in the ‘liquor barons’ and companies the pervasive hand of capitalism striving to keep the working man sedated with cheap drink.

It is often pointed out that the 18th Amendment did not actually ban the consumption of alcohol merely the manufacture, distribution and sale of them and Prohibitionists were motivated more by the desire to break the hold of ‘Big Alcohol’ than infringe on people’s personal liberties. This, frankly, is disingenuous given that shutting down complete access to alcohol would logically lead to an effective end to consumption.

There were some positives to Prohibition that should not be overlooked. In its first years arrests for drunkenness, hospitalisations caused by drunkenness and alcohol-related disease all declined.

On the other hand, Prohibition ushered in a number of new problems, many of them worse than what had gone before.

To begin with, the new act became massively unpopular almost overnight. Many people who had thought Prohibition would merely serve to modify or correct the behaviour of ‘problem drinkers’ suddenly found that they too were covered by the amendment.

‘Liquor’, at least in British English, is generally used to refer to spirits and with the wording of the Amendment being only “intoxicating liquors” would be banned many believed beer and wine would be left alone but they were wrong.

The most obvious problem during Prohibition was the rise of ‘boot-legging’, smuggling and organised crime across the country.

As drinking was driven underground so it fell under the control of criminal networks who reaped enormous gains.

With the increasing power of the mob came a rise in violence, racketeering and bribery. Civil, police, judicial and political corruption filled the veins of the American system with appalling results.

And then there was the fact that the law was not properly enforced. In the first instance, with over 60,000 federal criminal actions in the first two years of Prohibition the justice system and then the prisons became swamped.

Judges let off perpetrators with small fines in exchange for a guilty plea and only 60% of cases that went to court ended with a conviction as in many instances juries composed of men who drank were less likely to convict someone for the sale of “intoxicating liquors”.

The production of illegal alcohol, as it still does around the world today, led to dangerous spirits being produced with as many as 10,000 (even 50,000 in some estimates) deaths attributed to methanol poisoning.

On the other hand again, Prohibition gave increased prominence to cocktails and mixed social drinking with men and women drinking together whereas many pre-Prohibition saloons had been for men only.

This was the age of the Speakeasy and jazz, flappers, the Great Gatsby and the Great Depression. One shouldn’t put a gloss on the rotten underbelly Prohibition created in America but this was also one of the most vibrant cultural periods in its history and set against the background of economic turbulence people wanted to drink, have fun and forget themselves.

The backlash against the temperance movement also grew enormously. Politicians began to questions funding and influence of the Anti-Saloon League and its head, Wheeler, fell from grace when the Prohibition Bureau began adding poison to industrial alcohol instead of non-lethal options. Wheeler argued that if boot-leggers stole poisoned alcohol for their own use it was not the duty of the government to protect citizens’ lives if they broke the law and drank – also giving lie to the claim that the 18th Amendment wasn’t concerned with the consumption of alcohol.

Ultimately Prohibition failed on a number of levels. As well as giving rise to widespread organised crime, corruption, large scale civil disobedience in flouting the law and lack of proper enforcement, Prohibition also led to an increase in drinking and while crimes involving drunkenness actually decreased a little, crimes such as assault, battery, theft and murder increased – usually with a mob angle. Spinning off from alcohol the mob then moved into other areas such as prostitution, gambling, narcotics, loan-sharking, extortion and labour rackets, entrenching their power and wealth and causing problems that extended well beyond the end of Prohibition.

In December 1933 Utah became the 36th state to ratify the 21st Amendment which repealed the 18th and Prohibition was gradually rolled back across the country. Not every county in every state repealed their own local limitations or prohibitions on drinking but it was no longer a Federal business and the re-ignition of breweries, distilleries and wineries and their various distribution and sales arms brought an incredible windfall in much needed taxes into the nation’s coffers.

The 18th Amendment remains the only statute in the history of the US to have ever been repealed.

*At the time the US was comprised of just 48 states, Alaska and Hawaii were territories and were not admitted to the Union until January and August 1959 respectively.