Château Mouton Rothschild has revealed the label for its 2016 vintage, ‘The Triumphs of Bacchus’ by South African artist William Kentridge. 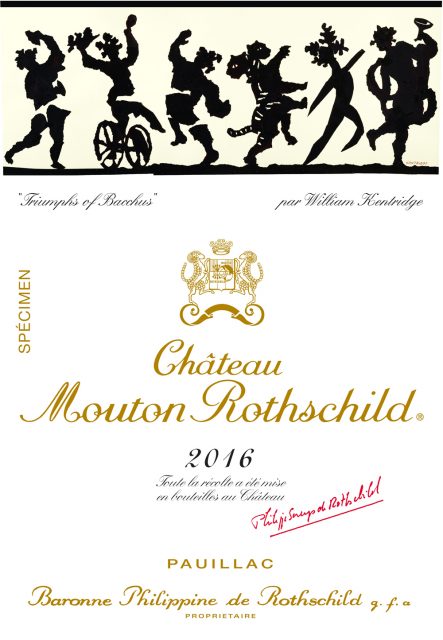 The label features a procession of cavorting silhouettes, a nod to classical descriptions and depictions of Bacchus at the head of a train of joyful followers.

It is a scene that has endured in painting throughout the centuries, envisaged by the likes of Titian and Matisse among others.

“Underlining,” as Mouton said in a release, “the truth that a great wine, although first and foremost a pleasure, is also inseparable from a cultural tradition which demands respect.”

Kentridge is the first artist from the African continent to have contributed a design for Mouton Rothschild’s grand vin.

His own design has echoes of Matisse’s later work, especially his ‘cut-outs’, as well as the sketches of former Mouton label contributor Pablo Picasso.

Gerhard Richter was the artist invited to design the label for Mouton Rothschild’s 2015 vintage.