The craft beer boom has led to a 20% surge in people registering trademarks for beers in the UK, according to new research, which warns of a rise in legal disputes ahead as brands are “likely to overlap” 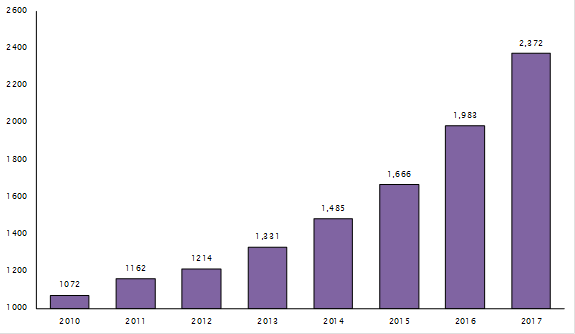 A rising consumer demand for limited edition and small batch beers means that breweries are launching far more products which carry their own protections, with the number of beer trademarks in the UK doubling since 2010, according to research by City law firm RPC.

The past three years have seen the most rapid growth, with an average of almost 300 new trademarks being registered each year since 2014. Last year saw the biggest leap, with 389 new registrations.

In Scotland, the number of breweries in Scotland rose by 229% in 8 years to hit 115 this year, according to the The Scottish Parliament Information Centre (SPICE), while there are now over 60 distilleries in the country producing gin.

Ben Mark, Legal Director at RPC, says: “The craft beer market has grown to a scale where some of the IP behind the brands is extremely valuable. Protecting the value of those brands is becoming increasingly important.”

RPC says that the rise in the number of beer trade marks has inevitably led to a host of trade mark disputes in the sector. This has emphasised the need for businesses to protect their brands from the outset.

“By ensuring that the business’ IP is protected and actively monitored and enforced from the outset this gives the business an edge on the competition in an increasingly saturated market. It can also alleviate the risk of and lengthy legal battles down the road that inevitably distract from the more exciting business of innovation and growth.”

Trademarks on beers have become a sore point for many companies within the UK’s drinks sector.

BrewDog has won its battle against the Elvis Presley estate back in January after a previous ruling, which banned the Scottish brewer from calling one of its beers ‘Elvis Juice,’ was overturned. Before the first ruling, BrewDog founders James Watt and Martin Dickie both changed their names to ‘Elvis’ by deed poll after the estate took legal action against them.

But the situation is worse for distillers. RPC warned disputes between brands are “likely to rise” in July 2018, after releasing a report showing the number of trademarks registered for spirits and liqueurs in the UK rose by 41% to reach 2,210 in 2017 – an 84% rise in the last five years.

Trademark wars have become an issue wherever craft beer and spirits are on the rise. MMA champion Conor McGregor only recently launched his own Irish whiskey — Proper no. Twelve — label after three years of preparation thanks to a legal row. He had initially tried to launch the whiskey under the brand name “Notorious Whiskey”, after his own nickname The Notorious Mystic Mac, but intellectual property dispute with a local brewery of the same name forced him to backpedal on his original label.

But disputes between drinks giants and brewers were not uncommon even before the recent trademark surge. In 2013, Red Bull demanded a small Norwich brewery — Redwell — change its name because of a supposed “confusing similarity” between the two.