Heineken is hoping to tempt the 75% of beer drinks who have never tried craft beer into the growing category, with the launch of two new beers under its new Maltsmiths Brewery label. 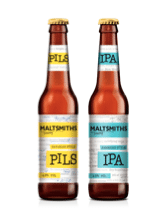 The new beers – a Bavarian-style Pilsner and an American-style IPA – are being rolled out from this month, and are intended to take a slice of a “huge untapped market” by appealing to people who haven’t yet started to experiment with the growing trend.

Sam Fielding, who heads up the new beer team at Heineken, said the company could have a positive impact on the sector, for although people were talking about and experimenting with new beers, around 75% of beer drinkers had not yet tried ‘craft beer’.

“This is about getting curious beer drinkers into the category and expanding their repertoire with more flavoursome beers – which will be a springboard for them to discover beers from the 1,500 breweries in the UK,” he said. “We have the capabilities to educate and support retailers with their offering.”

“This is about supporting our customers and growing the category for the entire industry.”

The Maltsmiths’ Pilsner contains Centennial, Chinook and Columbus hops to give it earthy pine and citrus flavours with depth, while the Maltsmiths’ IPA has a more caramel base with hops giving notes of citrus, grapefruit, and tropical fruits and a little pine for freshness, Heineken said.

The beers, which clock in at 4.6% ABV and are available in 330ml cans, bottles and on draught, were developed at the Caledonian Brewery in Edinburgh by Heineken’s brewers, Alex Brandon-Davies and Sarah Bartels.

Hamburg-born Bartels, who studied distillation and brewing at Heriot-Watt University’s International Centre for Brewing and Distilling (ICBD), said the best part of the project had been the freedom to create new beers from scratch. “We really wanted to bring this to life on the packaging which is why you’ll see our recipe notes on the design.”

Brandon-Davies explained they had wanted to brew beers that “would appeal to the beer-curious” who for whatever reason, have “yet to experiment”.

“We’re hoping that drinkers will love the fuller flavours and it will be their first step into experimenting with beers from the hundreds of other breweries in the UK,” he added.

The Dutch brewing company entered the craft beef market in September 2015 when it acquired a 50% share in US beer brand, Lagunitas Brewing Company. At the time of the acquisition, Lagunitas was one of the top ten craft beer brands in the US.

The Caledonia Brewery also producers other ‘craft’ brands for Heineken, including the Coast Coast, Three Hop and Rare Red, which were launched last August.