Heavy metal band Metallica have released details of their new whiskey, revealing that they played bespoke playlists of their music to the barrels while it aged as part of a patent pending process, describing it as “the next evolution of whiskey”.

Called Blackened, after the song of the same name on their 1988 album Justice for All, the band used a unique, patent-pending “sonic enhancement” process known as ‘Black Noise’ to “shape” the whiskey’s flavour, which involved using custom playlists of Metallica’s music – a different one for each batch – during the distilling process.

The ‘Black Noise’ process involves playing Metallica’s music through a subwoofer to disrupt the whiskey inside its barrel, supposedly affecting it on a molecular level and causing “increased wood interaction that kicks up the wood-flavour characteristics in the whiskey.”

The whiskey itself is a blend of Bourbons, ryes, and whiskeys from all across North America, carefully selected and housed in black ex-brandy barrels.

The drink was devised by the metal heavyweights in collaboration with Dave Pickerell, former master distiller at Maker’s Mark.

A new website for the whiskey describes Metallica and Pickerell as “unapologetic masters of craft in their respective fields, they’ve built world-renowned legacies by carving out new spaces and bringing their singular, incendiary perspectives to everything they touch.”

The site adds: “Blackened is a testament to the creative process, to the hard work and determination required to make something from nothing. It’s a monument to the ones who charge into the fray and come out the other side stronger, together. Fuelled by decades of creative passion, Blackened is a distillation of the incomparable bond between the band and their community of fans.”

While the method might sound innovative, Metallica are not the first to use music to age a spirit.

Among the distilleries to have already taken up the practice is Copper Kings in Louisville, Kentucky, which produces American craft brandy. It plays music through a set of subwoofers into its barrel room, which the team believes alters the evolution of a spirit in barrel.

The principal of sonic ageing is that vibrations throughout the barrel, the intensity of which can be controlled depending on the type of music played, and whether its a treble or bass note, disrupts the molecules in the barrel creating a ‘distillate wave’ inside the barrel and greater interaction between the liquid and the barrel.

Similarly, Dark Island in New York also musically mature their spirits, pointing towards the whiskies and rums of the 1700s, which it says historians agree to be among the best ever produced, as proof that the method works. Such expressions were transported by wagon train or in the hull of a ship over a period of three to five months, with the liquid constantly moving throughout that time.

“Consumers found that these transported spirits had much more depth of flavor and smoothness compared to the products that were statically aged,” states Dark Island. “With this knowledge, we set forth to develop a technology to move our spirits.”

Each batch of 5,000 bottles of Blackened American Whiskey will come with an accompanying playlist at blackenedwhiskey.com and on Spotify and Apple Music, and will also be available in stores, restaurants, and bars surrounding a handful of US tour dates this winter.

Blackened is available to order now, and costs $53 dollars a bottle. 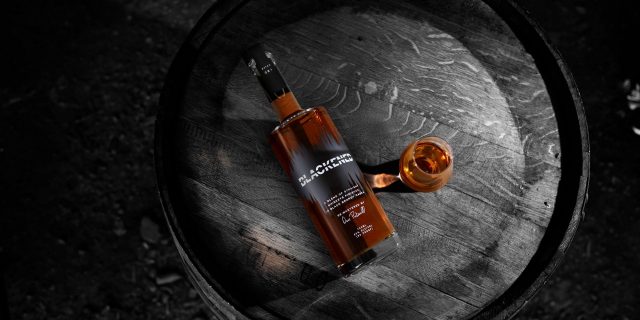