A vodka housed in a golden Fabergé egg whose recipe was originally created in 1721 to impress Russian Tsar Peter the Great has gone on sale in global travel retail priced at €1,600. 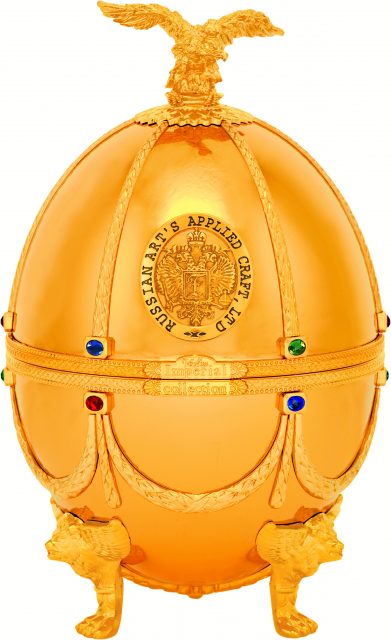 The gilded egg is decorated with 24-carat gold, and blue, red and green crystals. Inside it is a 75cl decanter of Imperial Collection vodka and four Venetian glasses.

The vodka itself is made with water from Ladoga Lake, the largest freshwater lake in Europe, alongside wheat and rye from central and southern Russia.

After distillation the vodka is filtered 12 times. The brainchild of the Ladoga Group, the golden egg will be on show at this years TFWA show in Cannes in early October, which showcases the latest innovations in travel retail.

The company produces 1,200 eggs a year in a range of colours, 20% of which are sold in the travel retail sphere. The coloured eggs cost €1,000 each.

“Every element of our Imperial Collection Fabergé range is unique and presents a special opportunity for the global travel retail market,” said Ruslan Grigoryev, export director for The Ladoga Group.

The Ladoga Group is enjoying year-on-year growth and is currently the best-selling vodka in Russian airports. The company is hoping to recreate this success around the world in the duty free arena.

“There is a huge appetite for premium and super premium vodka within the global travel retail market and we are looking to capitalise on this trend with our unique portfolio and recipes developed almost 300 years ago,” Grigoryev added.

Peter the Great ruled Russia from 1682 until his death in 1725, expanding Russia into a major European power through a number of successful wars.

After winning access to the Baltic Sea through his victories in the Great Northern War, Peter the Great founded the city of St. Petersburg in 1703.