Sotheby’s latest Hong Kong sale has set a new record for a single owner collection sold at auction in Asia and a world record for a wine sales series. 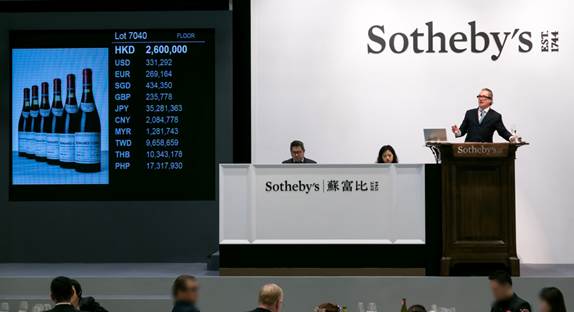 The sale took place from 30-31 March and included two major collections, one from an anonymous Asian collector, the other the collection of US film producer Jerry Perenchino, with the proceeds from both going to charitable causes.

The Philanthropist’s Cellar was sold for HK$127.2m/US$16.2m, with the proceeds going to a charity that supports underprivileged children in rural China.

Jamie Ritchie, worldwide head of Sotheby’s Wine said: “We are thrilled to set a new world record for any series of wine auctions. To sell every one of the 1,758 lots in two major single-owner sales as well our various-owner auction is a sign of a buoyant market as well as the confidence placed in the Sotheby’s team by both consignors and buyers.  We are set to build on this success in the year ahead with a second offering from the Perenchio cellar this May in New York, a single-owner sale in London, as well as our new retail website.”