The performance of Domaine de la Romanée-Conti in the secondary market is often referenced but which label from its stable is the best performer? Hint: It’s not Romanée-Conti. 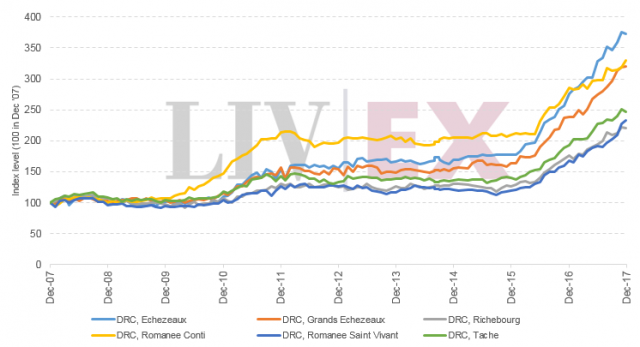 Highlighted in Liv-ex’s latest Burgundy Report, since 2007 the best-performing label of all Domaine de la Romanée-Conti’s grands crus has not been the much-touted Romanée-Conti but the apparently over-looked Echézeaux.

In 11 years it has increased an astounding 250%, quite clearly taking off from December 2015 and then barrelling past fellow-label Romanée-Conti in late 2016.

As Liv-ex notes, “Echézeaux has historically offered one of the cheapest entry points into the DRC brand,” and so is naturally an attractive proposition for those looking to get a little slice of the Domaine de la Romanée-Conti cake.

It’s a similar story with Grands Echézeaux which also looked like it might overtake Romanée-Conti performance-wise before a late rally at the end of last year kept the premier label ahead – just.

Interestingly, however, since ‘Brexit’ in May 2016 the worst performing label has been Romanée-Conti.

One label on the up within the Domaine de la Romanée-Conti stable would appear to be Romanée-St-Vivant.

Previously the weakest label among the six, at the end of last year it climbed above Richebourg into ‘fifth place’ and since ‘Brexit’ it has been the third best-performing Domaine de la Romanée-Conti label (behind Echézeaux and Grands Echézeaux).

The status of ‘overlooked’ labels from Domaine de la Romanée-Conti was examined by the drinks business at this time last year.

Back then it was noted that as the demand for Romanée-Conti continues to climb so the attention of buyers would filter down to other labels in the portfolio – something indeed that was happening at the time of writing.

As Liv-ex noted, Echézeaux being the cheapest offers an easy way in (for those with the money) but there’s much to be said for on-going improvements with the winemaking at Domaine de la Romanée-Conti itself.

Such is its reputation that many no doubt believe the domaine has already attained a Nirvana-like state of viticultural enlightenment – something Aubert de Villaine and his team would absolutely refute.

A case in point is Romanée-St-Vivant, which for many years was always seen as something of a disappointment within the range, being marked by rather hard, bruising tannins.

It is only in more recent vintages that this has been properly mastered and it is, in the opinion of de Villaine, the most improved of all the wines made at the property.

With that has come an improvement in its scores and, perhaps, greater recognition that is giving it a leg up in the secondary market.

What is happening within the small array of wines produced by Domaine de la Romanée-Conti is, in effect, symptomatic of what is happening within Burgundy at large (indeed fine wine as a whole) – an increasingly broad and diverse secondary market, with buyers spilling out of increasingly constrained top-level crus and domaines due to a trifecta of demand, price and supply (due to small vintages).

Where once the Echézeaux, Romanée-St-Vivants and Richebourgs of the DRC stable could coast along in comfortable near-obscurity, now – more than ever – it appears the maelstrom swirling around Burgundy has caught them up into its churning embrace.