Champagne Henri Giraud has said it will be adding a new ‘pesticide free’ cuvée next year in response to growing health concerns and consumer demand for “simple pleasures”. 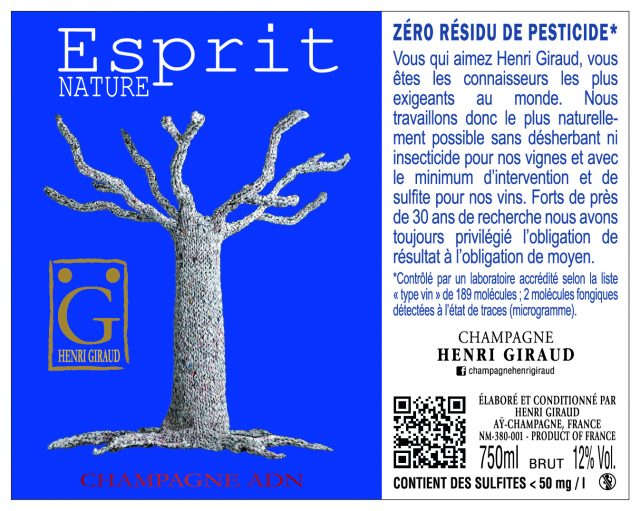 The pesticide-free ‘Esprit Nature’ cuvée, is due for release in January 2018 and will bear the label pictured left. The estate hopes to add the section declaring the wine is pesticide-free to all the other wines in its portfolio in the near future.

Although not an organic or biodynamic estate, Claude Giraud has said his domaine has been working using no pesticides or weedkillers for 30 years now and that this new labelling was just the next step in information given to consumers whose interest in every aspect of Champagne’s production has steadily been growing.

Giraud said: “Twenty years ago Champagne drinkers were interested in the composition of the blends. Then came the time when we talked to them of dosage, of disgorgement dates, of vineyard management and winemaking techniques… it’s now time to move on.”

Giraud added that, “for several years now we have systematically had our wines tested for pesticide residues and we have now decided to put these results on our bottles.”

The wine was monitored and tested for two years by an independent COFRAC-accredited laboratory, which looked for 189 chemical compounds commonly found in vine growing.

None were detected with the exception of two fungal molecules at such trace levels they were counted as insignificant.

As mentioned above the wines are not organic as Giraud admitted they used some synthesised products against mildew and although they are non-chemical in composition they are not allowed in organic viticulture.

Naturally, a few comments on social media have questioned whether it might confuse consumers (unintentionally) into thinking it was organic or biodynamic.

In a video accompanying the release, Giraud talked again and again of consumers wanting “simple pleasures” from their wine in which the issue of organics was partially addressed.

He said: ‘Today’s consumers need to escape from this morass of information and the internal squabbles which perturb the positive image that they have of wine.

“They need air, and new ways of rediscovering the pleasures of wine.

And that is also why we haven’t taken the easy route of organic or natural wine. Working with nature, with living matter, there is no room for preconceptions or bias.

“By creating this space of assurance, this space of serenity with our informative label, we are in fact opening up the possibility of rediscovering these simple pleasures.”

Whether or not Champagne consumers around the world are yet asking for assurance their wines are pesticide-free (though, why would they not be?) it is an issue that is right and centre of health fears in France currently with high pesticide use in the 1970s and ‘80s right through to today being linked to multiple conditions such as cancer and low sperm counts not just in vineyard workers but those that live close to vineyards as well.

A documentary aired in France last year on pesticide usage in Bordeaux drew protestors onto the streets.